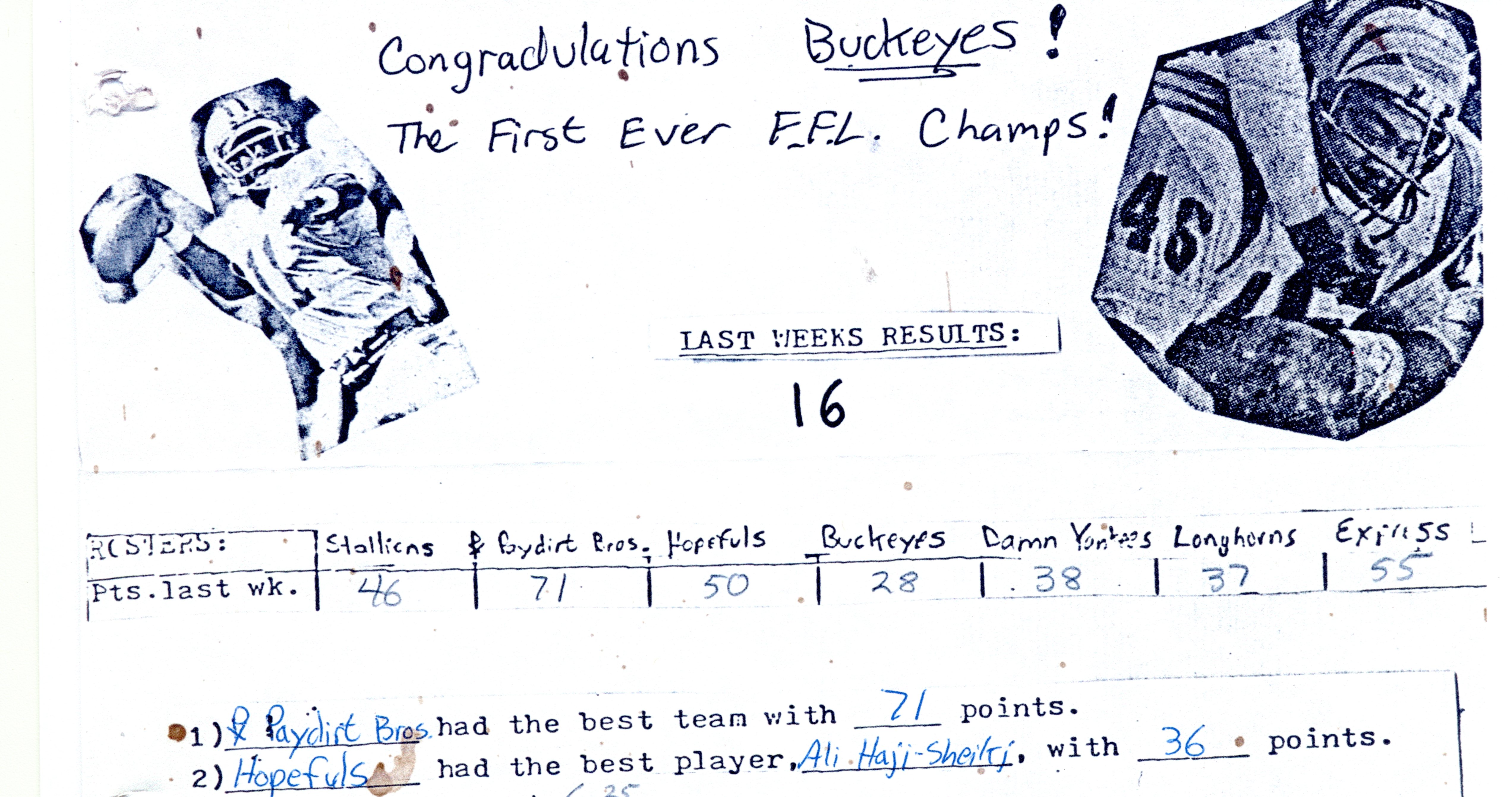 Fantasy football has grown into a billion dollar industry since its humble inception. Bragging rights, cash and pride are at stake when each new fantasy football season rolls around. So who exactly were the founding fathers that created the first rudimentary fantasy football league? No one knows for sure, but there is a strong hunch that the first league began in Georgia’s own backyard in 1983.

A group of eight high schoolers ranging from 16 to 17 years old may be the creators of the first ever documented rotisserie fantasy football league. Marist students Scott Frank, Frankie Doherty, Chris Decherd, Mark Wesley, Glenn Gilbertti, Jay Dowlen, Gil Markham and Chris Daniel all collaborated to concoct the first known fantasy football league which they named “The Fantasy Football League” or the FFL. The idea of creating a league first emerged after Scott Frank and his friends read a Sports Illustrated article discussing rotisserie baseball and how one might go about creating a rotisserie fantasy football league. The group decided to go forward and create a league of their own.

Each season’s draft was held at one of the participants’ house. The first inaugural FFL draft was highlighted by Glenn Gilbertti selecting Hall of Fame quarterback Dan Fouts first overall, while Scott Frank selected kicker Rolf Benirschke second. Selecting a number out of a hat randomized the order of the draft. Whoever had the last pick in the round would have the first pick in the following round creating a “snake” order.

After setting the teams, the true work would begin. Access to complete game stats in the early 1980s was not readily available like they are today. ESPN had been founded in 1979 and was still working its way into households across America and the age of Internet was over a decade away. The FFL would not be able to score its games until the following morning when the newspaper would be delivered and the league owners would tally up the points.

To avoid waiting until the next morning, the group would call local news stations for scores and stats. It would be a fellow Marist graduate who worked at Channel 2 on the weekends who would end up helping the league the most by answering their weekly phone calls– Ernie Johnson, who has risen to fame as a part of Turner Sports.

Frank cherishes the early years and says what he remembers most is “Spending Sunday afternoons with my friends at their houses and cheering for players we had never heard of and plays that seemed meaningless to our parents.”

The first two seasons of the FFL would be dominated by Scott Frank, who took the first two championships. Instead of a shiny trophy, league commissioner Chris Decherd sent out hand written letters labeled from “The Commissioner’s Office” to the winning team, congratulating them on a great season.

In year two, other high school friends Dan Perez, Sean McDonald, Chris Burns and Billy Gazdik joined as it grew into a 10-man league over the first ten years. To this day, The Fantasy Football League is still going strong but with plenty of new faces. Two original owners still participate, Doherty and Gilbertti. Many of the original core stay in touch and remain close friends.

“Putting in the time and effort often makes all the difference in winning the FFL and in life,” explained Frank. “Whether you or your friend is winning, always value the relationships and there is always another season.”

As pioneers to one of the biggest revenue streams in sports gaming now, the group never thought of themselves as being the firsts until they began to try and track down history dated earlier than their league. As a self-proclaimed packrat, Scott Frank has notebooks upon notebooks loaded with box scores and standings from the FFL. With their hard evidence, The Fantasy Football League is able to prove they played rotisserie fantasy football in 1983.