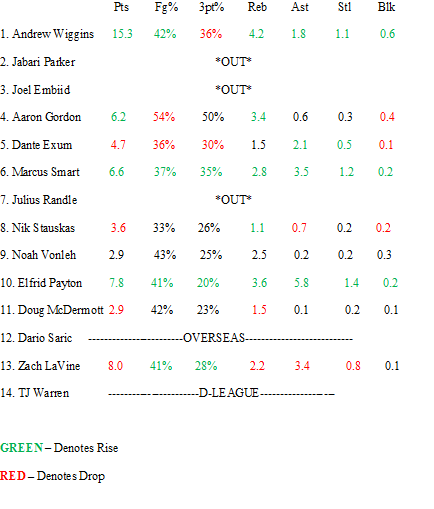 Now over three full months into the season we are starting to see some separation from the rookies. The draft class got off to a very slow start and still has been hindered by numerous season-ending injuries. Andrew Wiggins has taken the lead dog role with the NBA’s worst team (9-40) but a healthy Kevin Martin has returned and will take the majority of the shots along with a now healthy Nikola Pekovic. Wiggins did a nice job as the primary scorer with Shabazz Muhammad injured and Thaddeus Young having a poor season, but the rookie’s scoring will likely level back off.

Elfrid Payton has lived up to the billing as a Rajon Rondo-clone thus far. He can’t shoot a lick, but his passing and rebounding along his steady minutes allows him to fill up stat sheets for the Magic.

Marcus Smart has benefited greatly from the Rajon Rondo trade and has found himself playing big minutes since getting healthy. With question marks about his three-point prowess, Smart has answered the doubters hitting a respectable 1.3 threes per game at a 35.7% clip.

Zach LaVine has a successful run for a while as Minnesota’s starting point guard, but Mo Williams has since scored 52 points in a game and Ricky Rubio is now back healthy which will cut into the rookie’s playing time significantly.