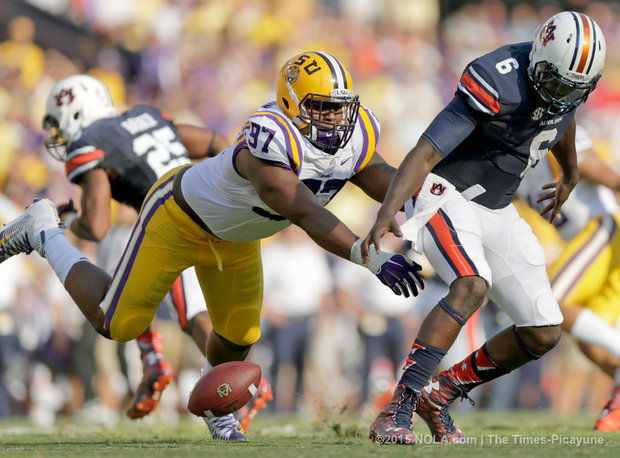 Two weeks ago the NCAA College Football AP Poll had an unprecedented 10 SEC schools in the Top 25. Fast forward two weeks later and only six remain. That was short lived.

That is how today’s society is with sports and topics beyond it. Everything is a knee jerk reaction put together to draw attention and gain ratings. I will stop you right here with this disclaimer: If you are an SEC fan, you probably won’t like this piece.

While everyone else will hold a party and blow smoke up each other trying to proclaim the SEC as the dominant conference it once was, once again, it is a level playing field in 2015. The once powerful conference has continued to regress towards the mean. The pollsters tried to throw 10 teams at the nation and hope it would stick to the wall like a spitball, but of course, it hasn’t stuck.

Auburn entered the season ranked No. 6 in the nation with a quarterback deemed the next Cam Newton – a Heisman Trophy winner, National Champion and No. 1 overall pick – in Jeremy Johnson, after he threw just 37 passes last season. Makes sense right? Anoint an unproven guy as one of the best quarterbacks in the nation because he plays at a major school. So how has the hype lived up? Try 473 yards passing on 59.7 percent completion to go along with a sparkling 5:6 touchdown to interception ratio while being sacked five times.

This is not your daddy’s SEC. The once formidable defenses have turned into mush. The steady quarterback play has deteriorated into arguably one of the worst out of the Power 5 conferences. Think about it. If anyone one of Ohio State’s trio of quarterbacks transferred to an SEC school, they would automatically become the best QB in the conference by head and shoulders above the rest. The wimpy little Big Ten that everyone picked on the past decade now has the reigning national champs and three quarterbacks better than anyone the SEC can put out. What a brave new world we are living in.

Speaking of the transfer quarterbacks how about Greyson Lambert? An unmitigated failure at Virginia who couldn’t beat out Matt Johns for the starting job, decides to transfer to Georgia to hand the ball off 40 times a game. This ACC reject, not good enough to play at lowly Virginia, comes in and sets an NCAA completion percentage record against South Carolina, going 24-of-25 for 330 yards and three scores.

So obviously the Ol’ Ball Coach must have been focused on stopping the run right? Make Lambert beat them through the air. UGA managed to run for 246 yards as well. So what’s this tell you? Is Lambert a Heisman Trophy hopeful now? In my opinion, it is just another damning instance of how far the SEC has fallen. Lambert couldn’t handle ACC defenses last year, but joining the weak SEC is the remedy that cures all. This is the same quarterback who produced a 20-for-40, 261-yard, two touchdowns and two interceptions stinker against a North Carolina team that gave up 39 points per game last year and ranked 119th out of 128 teams in defense. And please don’t get me started about last year’s UCLA game and how many times he threw interceptions in the red zone. Once the bullets start flying and the Dawgs play a competent defense, I think his stat line will look a little different.

Let’s look at No. 25 Missouri now. The Tigers beat Arkansas State 27-20, then UConn 9-6, but somehow they are still ranked and have only dropped one spot since the preseason polls came out. What about Arkansas and the trash talking Hogs led by Bret Bielema? He criticized Ohio State for not playing anybody. Maybe he should try worrying about his own team first? Losses to Toledo and Texas Tech have dropped the preseason No. 18 out of the rankings.

On Saturday Alabama got thumped by Ole Miss (who tried to give the game away) and dropped from No. 2 to 12. Seems harsh, but okay. Then Ole Miss jumps from No. 15 to No. 3 and has gotten 11 votes to be No. 1. Talk about a knee jerk reaction. Leaping to No. 5-7 would be warranted but hopping over Baylor and TCU? It’s a little much.

At the end of the day, ESPN and the “experts” out there have once again tried to sell you a bill of goods and a check they can’t cash. I encourage you all to not live by groupthink, but to come to conclusions on your own and realize, this is a whole new ball game.

The one SEC school that I do buy, is No. 8 LSU. If they can find consistent quarterback play, they could be the one team out of the SEC to make the Playoffs. Other than the Tigers, I think it’s a lot of smoke and mirrors surrounding the conference and that opposing teams, coaches, fans and analysts should start looking at the names on the back of the jerseys and not on the front.