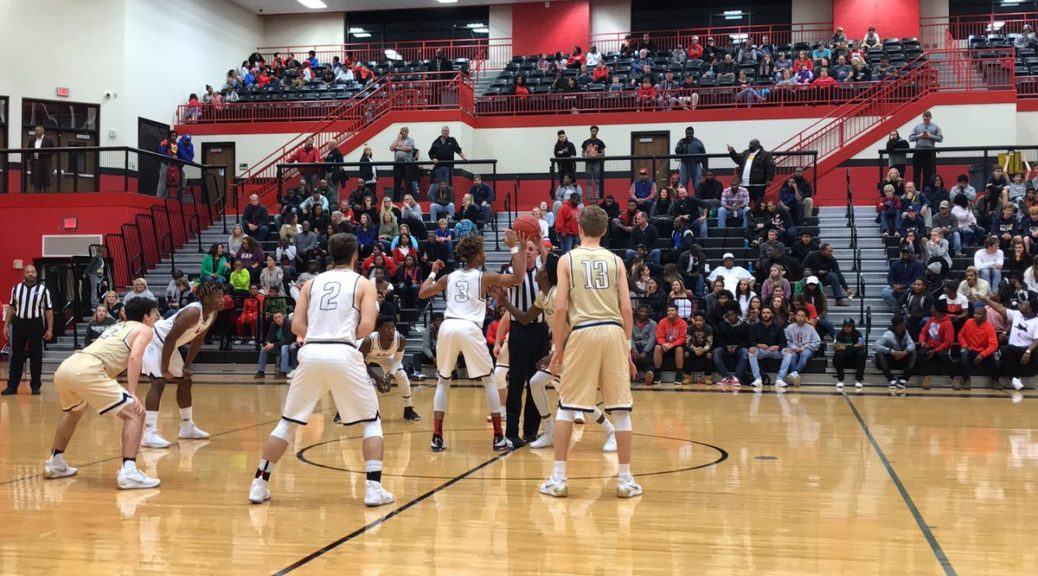 From the opening tip, No. 2 St. Pius (8-1) was on a mission to take care of business at the beautiful Currahee Arena. No. 7 Stephens County (6-1) turned out the lights to bring a raucous atmosphere into play, but the home standing fans were quickly negated by the Golden Lions’ 9-0 run just 1:16 into the contest.

Instead of using a timeout to try and slow down St. Pius’ defensive harassment and three-point barrage, Coach Chad Bridges elected to try and let his guys play through it, a plan that backfired. The Golden Lions attacked and attacked. Zach Ranson came off the bench and quickly picked up a steal and assist to Brian Gonzalo.

Zach Ranson enters and gets a steal and assist to Brian Gonzalo pic.twitter.com/axrsHOjZI1

When the dust settled from the first quarter, it was a 27-9 St. Pius advantage. Interestingly enough, the Golden Lions got out to their hot start with point guard Matt Gonzalo on the bench to begin. Stephens County sat 6-foot-7 post DeUndra Singleton to begin as well. Tae Thornton looked like the only Indian ready to handle the Lions’ non-stop pressure defense, but against a team like St. Pius, it takes more than one soldier to defend the castle.

After sinking five first quarter threes, the Golden Lions continued their onslaught, hitting four more in the second quarter. With the game already out of hand, Jackson Bell provided a small spark for the Indians, entering the game and picking up an And-1 opportunity off a put-back but the Indians still trailed 36-19 with 3:39 remaining in the half.

Jackson Bell with an And1 rebound but air balls FT. pic.twitter.com/2g4NB4LA6l

Stephens County went on a run and closed the gap to 41-28 with 55.2 seconds left, riding Thornton’s fearless play attacking the rim and setting up transition opportunities, but momentum was quickly lost as St. Pius closed on a 4-0 spurt including a Finn McCurdy put-back at the buzzer to take a comfortable 45-28 lead into halftime.

9 first half threes for Lions.

St. Pius opened up the third quarter a little sloppy as the Indians played fast and tried to use their length and athleticism advantages against the Golden Lions. At the 6:20 mark, Stephens County had clawed their deficit to a hoop away from being single digits at 45-34, but it would be the closest they would come in the second half. St. Pius quickly answered with an 8-2 run to balloon the lead back up to 53-36 hitting threes to crush the Indians’ spirit. Brian Gonzalo sank two threes in the period on his way to finishing with a team-high 15 points while brother Matt sank a triple, as did Patrick Snipes, contributing to the Lions’ 13 three-pointers on the night.

At the end of three quarters, St. Pius held a 67-45 lead and would milk it all the way to the final horn. Singleton scored eight of his game-high 21 points in garbage time while 6-foot-6 Ty Nails tossed in six of his 12 points in the same frame.

The gap between No. 1 Upson-Lee and No. 2 St. Pius and the rest of the field seems enormous right now. No. 3 Sandy Creek is quietly having a strong season, as are teams in Region 1 out in Columbus, but the Knights and Golden Lions are playing great basketball night in and night out. The Golden Lions’ press defense is suffocating. They put their foot on the Indians neck from the opening tip and never gave them an opportunity to even think about an upset. The Lions move the ball so well, they are most likely the state’s most efficient offense when they are clicking. Driving and dishing led to countless wide-open three-pointers; they had 21 assists as a team. Defenses will need to be on a string to be able to contest all of St. Pius’ open looks. Matt Gonzalo and Brian Gonzalo were at their best tonight, peppering the defense with their drives and their three-point shooting. Matt is one of the quickest guards with the ball in his hands in the state. Everett Lane buried his three-point chances and rebounded well for his size. I love what Niko Broadway and Patrick Snipes bring to the table. They aren’t flashy but they are trustworthy glue guys that are always in the right spot to fill up the stat sheet. I need to see more from Kennedy Willis inside. He struggled to make an impact and wasn’t able to really clamp down on DeUndra Singleton. At 6-foot-8, a reboundless game is not going to cut it.

Stephens County was just outclassed tonight. They are still a very dangerous team for the rest of the state, but they just don’t matchup well with what St. Pius does. Tae Thornton was most impressive. He was a little out of control at times, but the 6-foot-1 senior guard played very hard and his athleticism gave St. Pius trouble from time to time. DeUndra Singleton didn’t have the D1 performance I was hoping to see from him tonight, but the big fella is still definitely a college prospect that will be able to provide minutes at the next level. The pace of the game was not conducive to post play, but Singleton still managed 21 points and 5 rebounds. Not being able to play above the rim will hurt him at the next level, but he still is a load on the low block and uses his burly shoulders well. Ty Nails was quiet. The 6-foot-6 swingman didn’t handle St. Pius’ pressure very well and struggled to get going on offense. Jackson Bell brought a nice energy off the bench. His hustle shined more than his skill, but he did good things out there for Coach Bridges. Senior guard Brandon Wheeler was aggressive attacking the boards from his guard position and picked up a handful of steals.