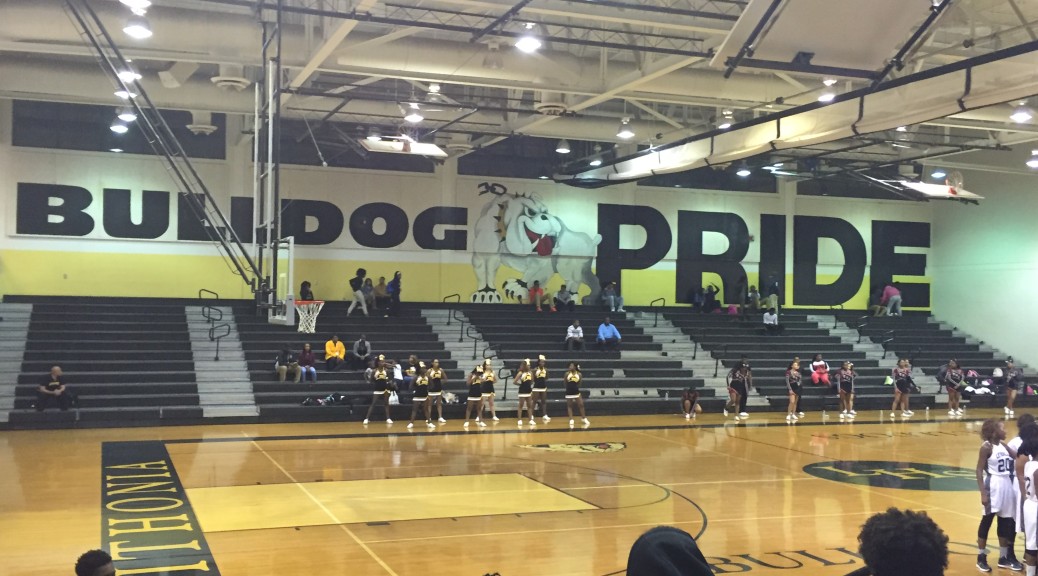 No.5 @GradyBasketball looking to make a major statement tonight on the road at No.1 Lithonia pic.twitter.com/PLfJyE3PJx

Another stiff test vs. a ranked opponent, another win for the No. 5 Grady Knights. Coach Brian Weeden’s team made the trip to No. 1 Lithonia for a crucial Region 6-AAAA showdown between the top two teams in the standings.

The Bulldogs, with the size advantage inside between Tyleen Patterson and Jacara Cross, took a 15-11 lead into the second quarter behind seven first quarter points from Patterson,  who finished tied for a team-high with 15 points. Rodney Chatman and Tyheem Freeman were able to cut inside and find the big man who finished with ease with the smaller Grady players surrounding him.

Then something happened in the second quarter. That something was Christian Bryant. The switch turned on and the Knights led by Bryant began attacking the rim fearlessly. Bryant scored 10 of his game-high 19 points in the second quarter and sank 8-of-10 free throws in the period. He finished 10-of-15 from the line and caused problems all game long for the Bulldogs.

Needless to say, for No.5 @GradyBasketball to win, Avi Toomer (Bucknell), Christian Bryant and DJ Brittian will all need big games outside.

Grady entered the half up 30-28 and kept the pressure on, this time behind Bucknell-commit Avi Toomer’s six points in the third. He finished with 16 points, six rebounds, three assists, three steals and a block after scoring seven points in the first half. Chatham picked up his third foul with under five minutes to play and went to the bench with the Bulldogs trailing 37-32. Grady surged ahead on a mini 8-4 run to take a 45-36 lead into the fourth after Lithonia squandered a chance at a last second bucket. After a mad scramble, Patterson scooped the ball up with three seconds left and had a two-on-one fast break. Instead of dumping the ball off, he tried to go over his defender for an and-one, but instead was whistled for his fourth foul on a charge as the buzzer sounded.

To open the fourth quarter, Grady put the game away with an 8-0 run that gave the Knights their biggest lead of the game, 53-36 with five minutes remaining. Grady began to take some time off the clock by holding the ball and being patient on offense which prompted Coach Wallace Corker to extend his Bulldog defense.

The game was seemingly out of hand before the Bulldogs showed some bite. Behind a 12-4 run Lithonia clawed the game back within single digits at 57-48 with 1:28 left to play. Bryant missed a pair of free throws after being fouled and allowed Lithonia a chance to crawl even closer, but Toomer had other ideas in mind.

The senior came away with a huge steal and tossed the ball up ahead to Tykwaan Bryant who slammed it home to make it an 11-point game with 1:10 left and in the process, slammed the door shut on Lithonia.

Lithonia had chances to come back, but missed free throws haunted them. At one point they missed five consecutive foul shots. They finished 15-of-28 at the line which proved costly in the 10-point loss.

My Take: Grady has to be taken seriously as a dangerous threat to making a deep run in the state tournament. There is no true front runner aside from No. 2 Jonesboro, who is the two-time defending state champion, but the Cardinals have lost a lot of championship pieces. Grady gets after it with their lightning quick guard play. They like to play fast on offense when they want, streaking to the basket, or they can slow things up and make you get out and extend your defense, leaving open holes for the ball handler to slice into. When I opened with Grady in my top ten to begin the season after a 14-15 season a year ago, it may have been met with skepticism. I knew they would have good guard play with the addition of DJ Brittian from Miller Grove, but I had no idea that Christian Bryant would assert himself into the picture. Bryant flew under the radar as a transfer from Bowie High School in Maryland, but he no longer is a secret. He’s tenacious with the ball and loves to draw fouls on the perimeter. He is the perfect complement alongside Avi Toomer and Brittian and has taken the load off of Toomer’s shoulders more so than anyone could have expected.

I would be remiss if I didn’t mention the play of an unsung hero: Kemari Averett. The 6-foot-7 post player is more known for his skills on the gridiron as a tight end and defensive end, but his size came in handy tonight. He chipped in seven points and four rebounds off the bench and gave the Knights a spark inside.

To sum things up in how Grady won, they just made Lithonia look slow. Tyleen Patterson, Tyheem Freeman and Jacara Cross all had nice games, but none of them stood out and took the game over. Cross looked like he was able to score at-will inside, Patterson at times too, but the Bulldogs were unable to feed them the ball consistently. Rodney Chatman had a very quiet night scoring the ball with just three points, but rebounded and passed the ball extremely well especially in the first half. For some reason I felt like Cross wasn’t 100% into it tonight. Maybe 95%, but not the extra five. He missed a big dunk and picked up a silly third foul early in the game at half court. He does have the skill set to dominate games however when he is fed constantly. He came away with three blocks as well, I just would have loved to see him get more touches inside and exploit Grady’s size.