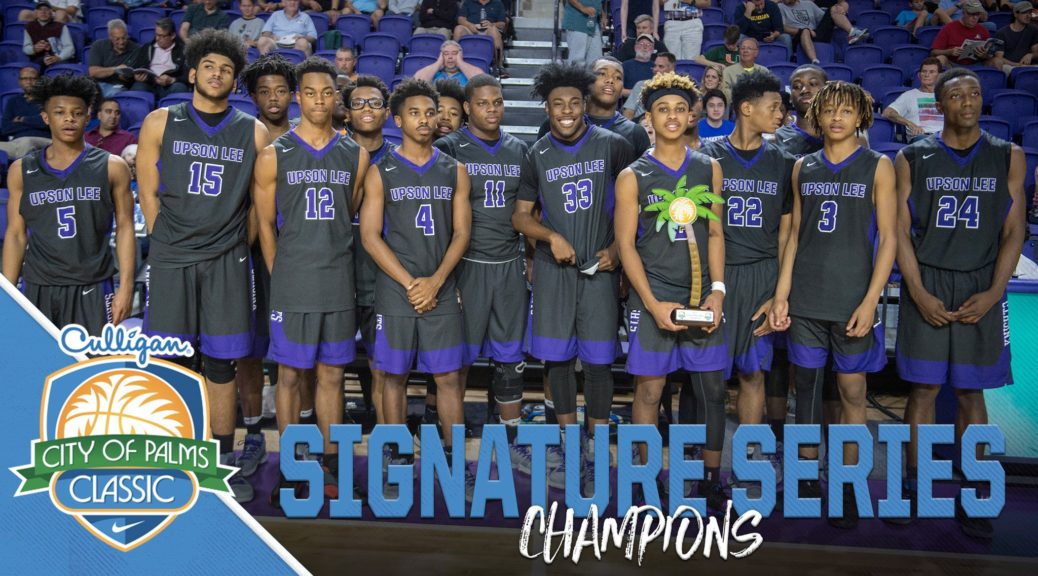 No. 1 @UpsonLeeSports 73
Corbin (KY) 71
FINAL@Tyefagan gives an assist to a cutting JaCorey Smith for a floater with just over a second left. Fagan finishes with 34 points. The Knights win the Small Town Signature Series here at the City of Palms. @KyleSandy355 @SandysSpiel pic.twitter.com/Rg82LCFPgt

Last Friday night had both Georgia teams playing in the City of Palms. The first of the two games was for the championship of the Small-Town Signature Series between No. 1 Upson-Lee and Corbin (KY). The Knights had a huge challenge having to guard Furman bound Andrew Taylor. Going into the City of Palms, Taylor was averaging just under 30 points per game and his first game in the tournament, he had an efficient 36.

The game started with Corbin winning the tip and immediately giving it to Taylor. Taylor, like throughout much of the game, was able to get to the rim easily or knock down outside jumpers. On the other end, The Knights were aggressive early and played downhill. Tye Fagan, who looked much better this game, came out attacking and was able to get going early.

To start the second quarter, the Red Hounds knocked down threes at an extremely high rate. They would space the floor and clear out for Taylor to get into the lane. He then would find his shooters who couldn’t miss. The Knights had a tough time closing out on shooters and Corbin made them pay. Fagan and big man Travon Walker did their part to keep the Knights afloat. Fagan was scoring consistently and Walker pulled down any rebound near him. At the half, the Red Hounds were up 42-29.

To start the second half, Fagan turned it up a notch. Corbin couldn’t stay in front of him and he was making plays for himself and his teammates. The Red Hounds, who lacked size, couldn’t defend Walker inside. Walker, who finished with 21 rebounds, had his way down low, moving much smaller players around. Upson-Lee’s defense was outstanding in the third quarter.

At the beginning of the final quarter, Fagan and Zyrice Scott started to knock down some threes. The Knights opened with an 11-2 run to get themselves back into the game. The Red Hounds appeared a little tired and the Knights attacked. Coach Darrell Lockhart made the decision to press Corbin, but ended up sending the Red Hounds to the line frequently. This may have actually been a blessing in disguise for Upson-Lee because the Red Hounds had a subpar shooting percentage from the free throw line and the clock was stopped.

As Corbin continued missing free throws, Fagan was scoring from everywhere. Scott also served as a great sidekick in the fourth quarter, knocking down his open looks. With about a minute left, both teams had scored 69 and the Knights had the ball. Fagan knocked down a mid-range shot and then Taylor quickly got a layup on the other end.

With the score tied at 71, the Knights held the ball for the last shot. Fagan drove baseline but was met with baseline help. This left big man JaCorey Smith wide open near the hoop and Fagan found him. Smith laid the ball in right before the buzzer and the Knights added another win to their record by a score of 73-71.

Tye Fagan is one of the most well-rounded players in Georgia. This game marked just the third time I have watched the Middle Tennessee State-signee in action and I wasn’t blown away the first two times. This game I finally saw what everyone was talking about. Fagan can score from all three levels rather well and can even put his back to the basket and find ways to score. He’s a tough guard than can rise up amongst the trees and grab boards as well, something a lot of guards don’t do nowadays.

Andrew Taylor is a steal for Furman. Taylor is a high-scoring guard that does his scoring very efficiently. In the first game of the tournament, Taylor dropped 36 points on 10-of-15 shooting and followed that up with a 26-point game on 9-of-17 shooting. He can take defenders off the dribble and find his shooters with ease. He is sneaky athletic and also gets to the free throw line at an exceptional rate. Through two games he shot 26 free throws and made 20.

Travon Walker is an extremely good basketball player, even though he’s a football player. After some research, I learned that, while an exceptional basketball player, Walker is a four-star defensive end with high major, SEC offers. This leads me to wonder how good would Walker be if he was only a basketball player? With great hands, soft touch around the rim, and great timing for jumping, Walker already has the tools to be a college basketball player. He pulled down 21 rebounds against Corbin, which puts himself on the all-time leaderboard for rebounds in tournament history.  If Walker were only a basketball player, he’d have more time to work on his rough areas and solidify himself as a D-1 recruit on the hardwood. But with Alabama and Florida State offers, to just name a few, I would say Walker has made the right decision to focus on football.