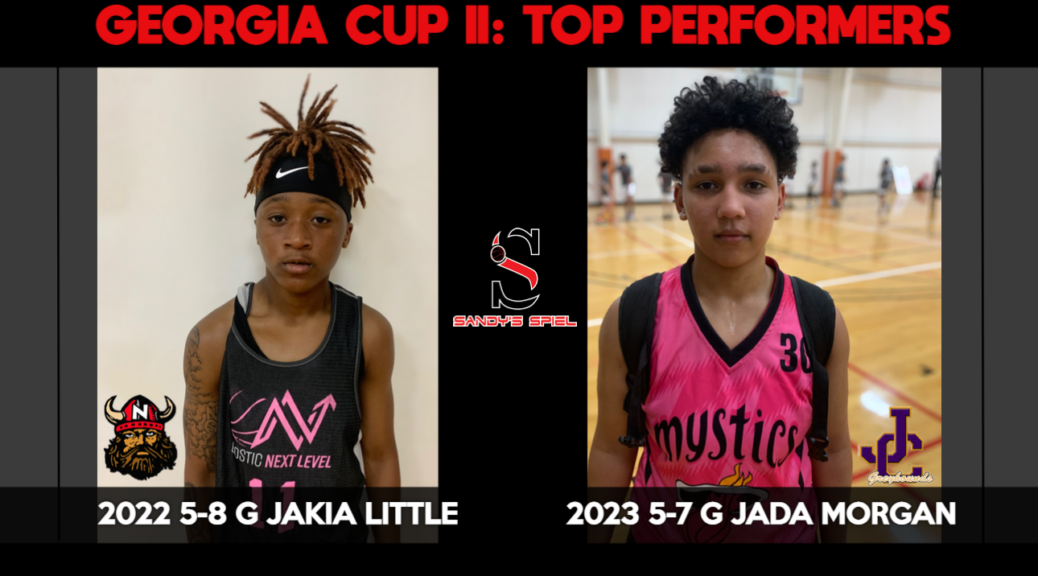 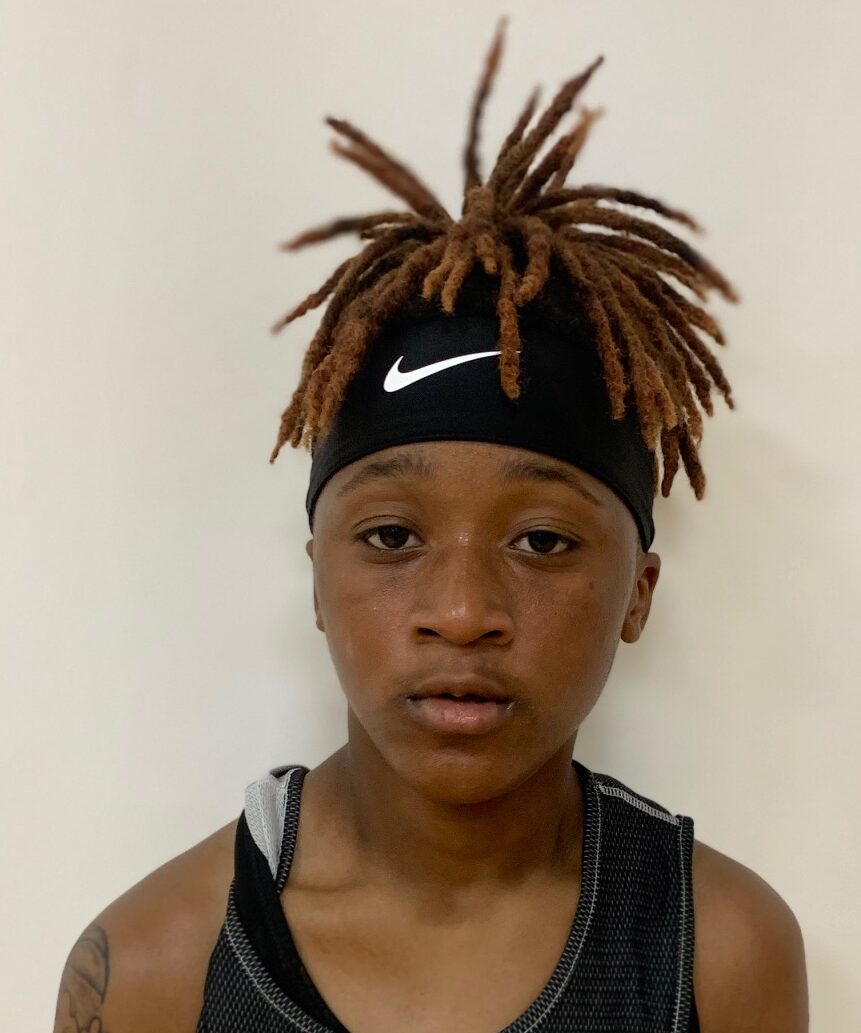 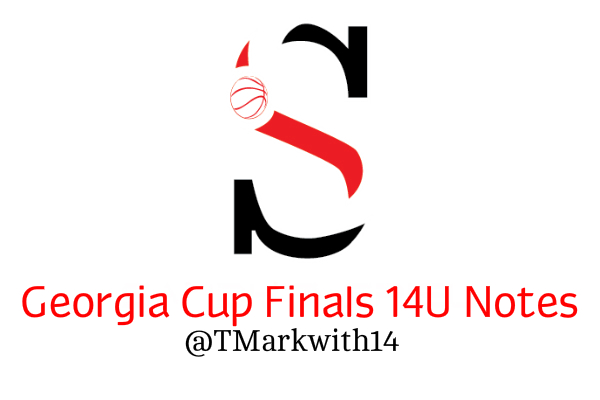 After close battles to win their first two games, the Marist War Eagles crew had another strong outing against the Georgia Kings. Led by Derek McDonald, WE was able to get great looks in the half court and get out in transition frequently. McDonald does it all for WE; just in this game I saw multiple 3’s, high post jumpers, full-court transition finishes, offensive rebounds, and big blocks on defense. He finished with 27 points but WE has some other weapons also. Charles Fleming is an assassin from deep, hitting (3) 3’s in the first half; Luke Benson runs the show at PG where he excels at facilitating; and Richard Reynolds is a solid forward who is tough inside but can also stretch the floor with his shooting. It looks like Marist has some good ones coming up to the high school level.

This Flames team has 4 perimeter players who gave them great production in a nice afternoon win over Hoops 360. Combining for 66 of their 79 points, Grant Shobe, Jason Edwards, Charles Bradley, and Gabriel Farmer all proved themselves scoring the ball. To start off, Shobe has a very unique offensive game. He totaled 18 points from (3) 3’s and also made some difficult push-shots, floaters, and reverse layups that seemed to surprise everyone that was watching when they went in. Edwards is extremely shifty and had a variety of wild finishes inside while also showing that he would not hesitate to shoot from way beyond the line, ending with 16 points. I really liked Bradley’s efficiency on offense; he is reliable on catch and shoot opportunities, but when that is taken away he uses just 1 or 2 dribbles to get to the rim and also gets putbacks, finishing with 18 points. Farmer did not waste any opportunities either, hitting 3’s, weaving through the defense and getting easy baskets off of sneaky cuts for 14 points. The Flames are an explosive team when all 4 of these guys are in a groove.

The group of St. Pius boys had a tight game on Saturday night against the Warner Robins All-Stars that made for an entertaining matchup. MTXE is a well-rounded, fundamental group that gets contribution from nearly everyone. They had 10 different players score with one who stood out above the rest: Kyle Seramur. Seramur connected on 5 threes for a total of 18 points and did this while only missing a few shots. Other main guys for MTXE are Carter Williams, Daniel Beverly, and Jack Verrill. Williams is a sound PG with outside shooting ability and makes sure to control things on offense for MTXE. Beverly is an athletic forward who makes a lot of energy plays, uses his length to finish, and plays with an edge about him. Verrill is an intriguing young player; he has great height and length for a player his age but is still raw and has to grow into his body. Verrill did display soft hands and some touch inside on offense, and altered shots consistently on defense.

The Warner Robins squad recognized an advantage in strength and athleticism over MTXE early on and had success throughout the game using these qualities. The 3 standouts for the All-Stars would have to be Gregory Jones, Rashaun Tomlin, and Andrew Grane. These 3 combined for 40 of Warner Robins’ 60 points and were key down the stretch for their team. Jones (11 points) and Tomlin (12 points) were huge inside for Warner Robins. Jones made hard drives in both transition and the half-court often, where he absorbed contact and finished consistently. Tomlin was a beast on the offensive glass, grabbing everything in his area and then putting it in the basket. Grane (17 points) displayed an advanced offensive skill-set, attacking fearlessly but knowing when to quickly pull-up and use his mid-range jumper, which he did multiple times. This attribute kept the defense guessing when Grane had the ball and resulted in easy looks for him.

Out of Cleveland, GA, Warrior Elite is another team with a lot of depth. They carry 9 players and all of them get solid minutes. There is not much, if any, of a drop-off between the team’s starters and reserves; 7 Warrior players scored 6 or more points in a late Saturday night bracket play win. The team plays an unselfish brand of basketball and thrives in transition because of their surplus of smart, athletic players. Dakota Orr and Cooper Turner were very impressive for the Warrior team. Orr presents a great combination of height, athleticism, and touch for 14U player. As he continues to add strength and develop his awareness, he could turn into an attractive prospect. Turner is a fast, physical guard who seeks out contact whenever he gets in the lane where he draws fouls and finishes through hits with regularity. Another Warrior player that got my attention was Eli Pitts. This may have not been his best scoring performance but he showed high IQ and good penetration ability that resulted in solid passes to open teammates. In other games, this penetration may have provided scoring opportunities for Pitts but he recognized that dishing to others was the best option in this game. 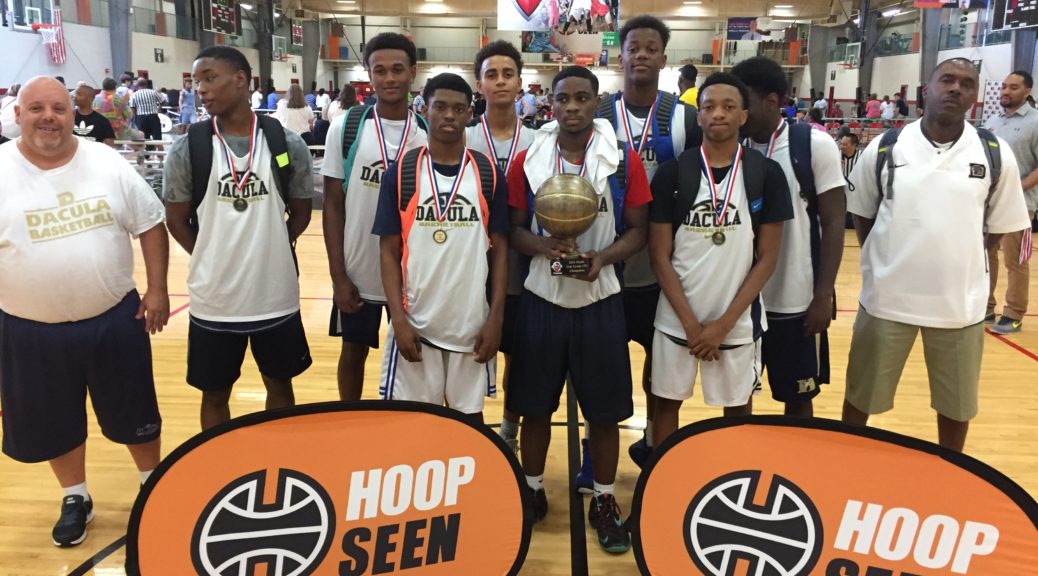 HoopSeen hosted its final installment of the Georgia Cup series this past weekend. As always, present and future standouts of the GHSA were on display. With summer team camps getting under way, players will begin to transition back into their respective school’s system of play but will be bringing with them an invaluable measure of experience from earlier in the offseason.

Two high school teams took to the Georgia Cup Finals as Riverwood (29-2) and Dacula (19-7) both began their 2016-17 journeys without some of their best players in school history. Riverwood, who set a school record in wins last year and made a trip to the Elite Eight, gave us a first look at life after Kohl Roberts (GCSU). Dacula flaunted its new-look lineup without Kevon Tucker (Wofford) and Derek St. Hilaire (Gordon State).

Riverwood went 2-2 this weekend while Dacula finished 5-0, rolling to the championship. The Raiders lost to Dacula 63-45 in the semifinals. Rising seniors Elijah Jenkins, Charnchai Chantha and Amir Smith played well in the backcourt, but they didn’t have enough fire power to contend with Dacula after jumping out to an early lead. Riverwood was among the state’s leaders in points allowed last season, relying on a stingy defense, but the Raiders’ bugaboo has always been can they score enough? When Jenkins and Chantha are hot from deep, they are a tough duo to stop, but if they aren’t hitting, Riverwood is susceptible to offensive lulls. Springy 6-foot-6 senior forward Josh Brown along with the play of rising juniors Christian Sutton, Lamin Williams and 6-foot-6 and still growing Nassir Mohammed will determine how well the Raiders cope with the loss of such an important senior class.

Dacula escapes one of the toughest regions in the state and will be one of only two Gwinnett County schools (Lanier) in Region 8-AAAAAA, avoiding the state’s highest classification as well. With such a young group, growing pains could be an issue early on in the season, but the harmonious syncing of the backcourt could offset the loss of the school’s leading scorer (Kevon Tucker).

Sophomore Mekhail Bethea, junior Arusha Hunter and senior Justin Goodson create a backcourt that compliments each other well. Bethea earned more playing time as the season went on last year and will be inserted into a starting role from Game 1 his sophomore season. Bethea was masterful in Dacula’s 80-63 win over Active Elite for the 17U Georgia Cup Finals championship. He finished with 22 points, three assists and four steals. Bethea will need to get stronger, but he already has great composure with the ball in his hands and can create open shots for teammates when diving the lane.

Hunter poured in 19 points in the second half and netted a game-high 23. He was an X-Factor with his ability to knock down threes (3) and attack the boards (8). Hunter even added three assists from his small forward position.  Goodson didn’t get much burn as a junior, but the streaky three-point shooter looks poised for a breakout senior season along with senior Gary Bishop after a strong summer and a few transfers helping open the way. Goodson banged home four deep balls and scored 21 points in the championship.

Once again, the Falcons won’t have much elite size with their tallest player standing 6-foot-4 last season, but that player, Shayne Buckingham, returns for his junior season. Buckingham has seen varsity playing time since he was a freshman and is continuing to gain confidence in his game and become more and more of a consistent contributor. He scored 24 points in a win over Sports Academy South. If Buckingham can run the floor, rebound well and play with a high-motor, he can improve vastly on his 4.7 points and 4.6 rebounds per game.

Lambert won’t have big men Connor Mannion (Navy) and Ross Morkem (North Georgia), but they should have more than enough to be a team that opponents don’t want to face. Andrew Melms will be running the show again at point guard and will enter the 2016-17 season as one of the state’s most underrated tenacious point guards. Musa Thompson enters his senior year as well. Thompson looked impressive with Melms in the Atlanta Warriors backcourt. Thompson has good length at 6-foot-4 and is a fluid athlete that can stretch defenses. Rising juniors Austin Deckard, Damon Stoudamire and Jordan McIlwain all provide depth along a talented backcourt.

BJ Millard, a recent Dunwoody graduate that averaged 16 points and 7.9 rebounds his senior season, played well for the Atlanta Warriors. The 6-foot-5 forward’s work at Dunwoody might have gone unnoticed by those outside of the region, but he is a good player that works hard in the paint.

Shamar Barrett put up big numbers his senior season at Grovetown (17.5 ppg, 4.9 rpg, 3.0 apg, 3.1 spg, 2.0 bpg) and is nearing a college decision. Barrett has been a stalwart for Sports Academy South, pitching in 26 points in a loss to Dacula this past weekend.

Keep an eye on Discovery High School. The second-year program returns an interesting cast of talent highlighted by guard DJ Young, 6-foot-5 forward Jaden Stanley and 6-foot-7 forward Kalu Ezikpe, who is only a rising junior. Travis McDaniel also joins the fold as an assistant after coaching at Lanier.