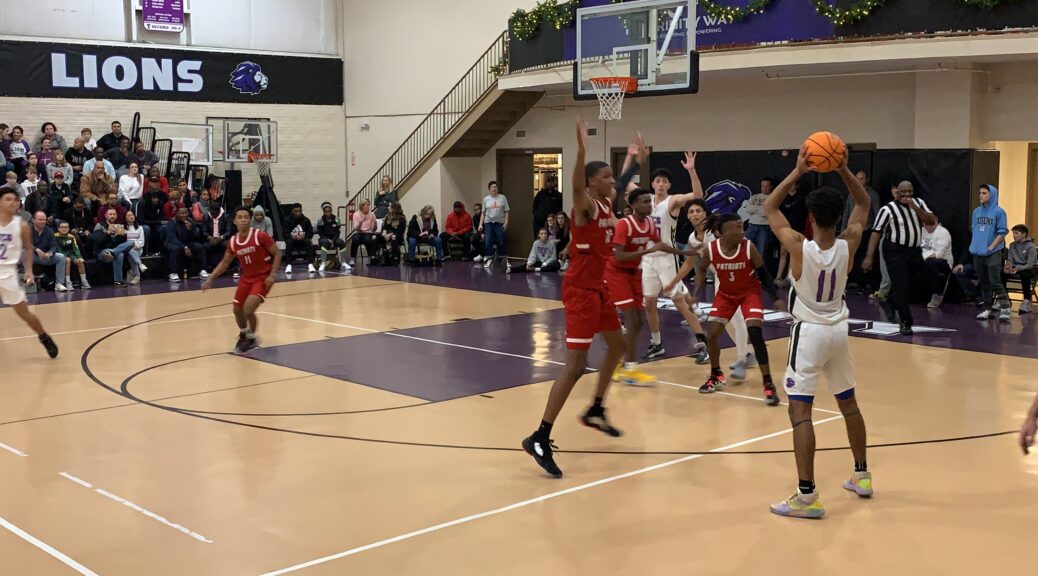 Some good bigs will lock horns.

Separated by just 9.3 miles, Friday night’s Top 10 showdown was the first time Class 4A No. 2 Sandy Creek (7-3) and Class A-Private No. 5 Trinity Christian (9-5) had met on the hardwood. In a packed bandbox, five-star 6-foot-9 junior Jabari Smith led his Patriots into battle against Trinity Christian’s athletic backcourt and lengthy frontcourt.

Trinity Christian, powered by the Dominican trio of 6-foot-7 senior Giancarlo Bastianoni, 6-foot-3 senior Raul Arias and 6-foot-4 junior Isaac Brito, got on the board first with a Bastianoni baseline jumper off a Brito assist.

Bastianoni asserted himself inside early, scoring nine of his 15 points in the opening quarter but with less than two minutes to play, Sandy Creek edged ahead and seized control of the lead as Deshon Proctor muscled his way to eight early points.

Sandy Creek led 16-13 after the first quarter as Smith contributed four points and set the tone defensively with three blocks.

The Patriots would nurse their lead the final 24 minutes, slowly extending it before the Lions would trim back into the deficit. Sandy Creek led 24-15 before Brito challenged Smith at the rim to end an 8-2 run.

Riding Smith, Sandy Creek pushed their lead to 32-21 with 56.5 seconds left in the half and had their sights set on a double-digit lead heading into the final two quarters but instead, the Lions closed with a flurry, sparking a 7-0 run as Michael Morge drilled a three off the bench to wake Trinity Christian from the doldrums and help bring the halftime score to 32-28.

With Smith sitting at 12 points, Coach Will De La Cruz turned to Brito to defend the nation’s fifth-ranked player in the 2021 class. Giving up five inches, Brito bodied up and played physical. He baited Smith into his third foul at the 7:08 mark as the Lions stilled trailed by four points.

Trinity Christian sliced the Patriot lead to 35-34, the closest they had been since the first quarter, but a Daryl Rice layup and a subsequent Smith And-1 dunk quickly pushed the Sandy Creek lead back to six at 40-34 with 2:10 remaining in the third quarter.

The Patriots took a 44-36 lead into the fourth quarter as the Lions began to run out of steam, playing just six players. Trinity Christian made one last mini-run as they drew to within six at the 5:54 mark following a Bastianoni bucket inside.

Smith picked up his fourth foul 20 seconds later, but the Lions could not capitalize as the Patriots finished on a 14-7 run to close out a 60-47 road win. Smith took over down the stretch with nine of his game-high 26 points coming in the fourth while finishing with a double-double, collecting 14 rebounds and 6 blocks. Matt Williams hurt the tired Lions in the fourth with his energy, creating second chance opportunities on the glass while Brian Branch chipped in four late points as insurance.

Sandy Creek’s Jabari Smith is as good as advertised. Smith is a well-rounded player that can play inside and out. There aren’t many 6-foot-9 big men that are run off flare screens for threes but it’s a wrinkle that Coach Jon-Michael Nickerson can deploy to get his star open looks all over the floor. Smith’s defense hindered Trinity Christian’s downhill approach. Even though he finished with 26 points, Smith had to work for every point. The Lions played him straight up with Isaac Brito at times while other times digging down with a double team. Smith picked up an early technical foul after blocking a shot away but for the most part did a good job of keeping his head and not letting Trinity Christian’s physical approach take him out of his game. Deshon Proctor finished with 10 points and 6 rebounds, eight of his points in the opening quarter. Proctor has cut up his body even more and is a physical presence down low and a trusty worthy scorer up close. He also made a few nice passes that led to assists. Undersized 5-foot-8 point guard Daryl Rice had a few nice moments, his best coming in the third quarter with five points. I felt like Sandy Creek’s most impactful guard was 6-foot quarterback Matt Williams. The senior amassed 4,093 yards on the football field and while he may not be “the man” like he is on the gridiron, he still brings over invaluable toughness and a motor that doesn’t quit for the Patriot backcourt. Williams made back-breaking play after back-breaking play in the fourth quarter as the fatigued Lions couldn’t keep up. Williams did a great job of rebounding, especially on the offensive end earning a handful of second chances. Williams has a nose for the ball and on Friday, a knack for making winning plays. He finished with 7 points, 7 rebounds and 6 assists.

Trinity Christian was impressive in my first look. Their backcourt is big, athletic and aggressive, always looking to push the tempo and get downhill. 6-foot-4 junior Isaac Brito was the alpha male for the Lions. He is an elite athlete that plays above the rim and always is trying to find a way to get into the paint. His athleticism and toughness allow him to be an effective defender. He spent a good chunk of the game in one-on-one coverage on Jabari Smith and frustrated him at times, using his body well to refuse Smith deep post position. Brito finished with 19 points, 5 rebounds, 7 assists, 2 steals and 1 block as a high-usage guard that was asked to do a lot on both ends. Giancarlo Bastianoni was the second source of offense, but he was winded come the fourth quarter. Trinity Christian played just six players with only Michael Morge seeing the floor for a few minutes off the bench. Their short bench will play a role in how deep they can go at state, especially against teams that can shuffle guys in and out, press or can just get the Lions in foul trouble. The Patriots pressed early on and took some body shots at the Lions to make them expend some more energy earlier than they would have liked. Back to Bastianoni however, the big man is skilled and understands how to play the game around the rim. He is patient in the paint and uses his frame well and he has range that extends out to the three-point line. He came out with a big first quarter but his impact waned as the game went on. Bastianoni could be a good fit for a program that likes to operate their big men in the high post. If D-I schools don’t materialize, which they likely will, a D-II program will be getting a plug-and-play post.  North Georgia-signee Brady Burnett was rendered ineffective with two points. He did not have many opportunities to affect the game. When he’s involved, Burnett is a well-rounded forward that can produce both inside and out. Raul Arias was also quiet with 4 points. Sharmari Reed, a Kennesaw State football-commit, is another athletic guard that makes his biggest impact defensively. When the Lions are clicking, they are impressive getting to the rim but with how Sandy Creek shut down a majority of the driving lanes, they will need some consistent floor spacers to emerge against teams that can pack the paint.