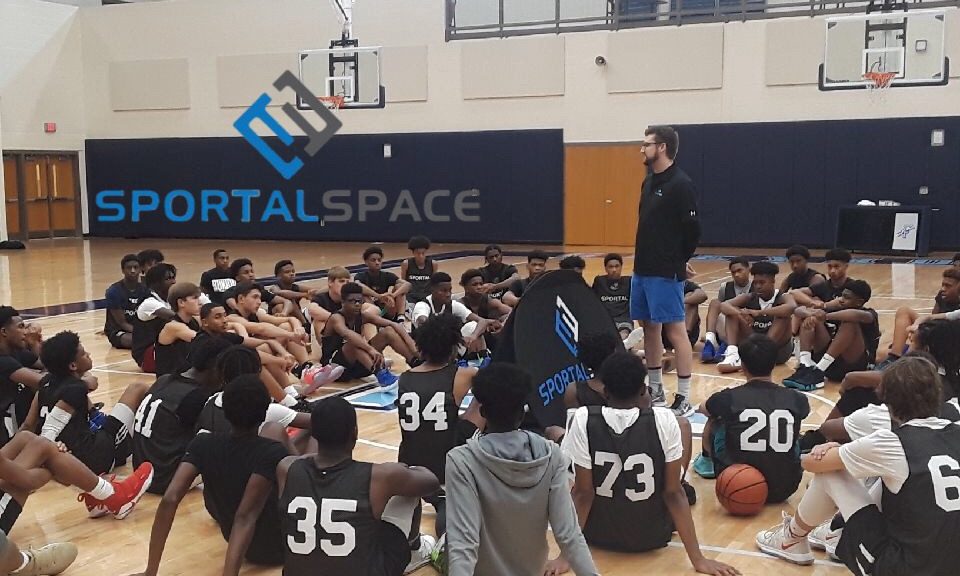 2020 5-10 PG Demajion Topps (New Manchester): Topps wowed the entire day with an aerial display of acrobatic high-flying dunks. He was must see TV. Topps also showed that he could have the ball on a string and break down any man off the dribble on his way to averaging 14.5 points per game. He had 15 points, 4 rebounds and 3 assists in the All-Star game.

2019 6-6 PF Zeff Felton (Dooly County): The big unknown from Class A-Public made a lasting impression, tearing down rims and gobbling up rebounds. His 22-point 25-rebound game was as dominating as you’ll see in a camp setting. He averaged 13.5 points and 14 rebounds on the day. In the All-Star game Felton didn’t slow down, posting 18 points and 7 rebounds.

2021 6-1 CG Marcus Samuel (Langston Hughes): The physical downhill guard assaulted the rim throughout the day, difficult to slow down after beating his man with the first step. Samuel rebounded well and provided energy on both sides. Samuel averaged 16.3 points over his first three games.

2021 6-2 CG RJ Noord (Greenforest): The talented ballyhooed youngster brought his alpha dog mentality as he used his athleticism to get to the basket. He cracked double digits in every game and proved to have potential as a defensive ace when locked in. Noord pitched in 10 points and 6 rebounds in the All-Star game and averaged 12.5 points over the course of the event.

2019 5-10 PG Orry Owens (Hillgrove): The wily veteran was quick in transition and knocked down a handful of pull-up jumpers from the midrange. Owens shined in the All-Star game when he poured in all 14 of his points in the second half. He averaged 10.2 points.

2021 5-9 PG AJ White (Chattahoochee): White was hunting his shot in spurts throughout the day, balancing getting his and getting his teammates involved. The microwave buried 7 threes over his four games, netting 15 points in the All-Star game. White was a blur, averaging 13.2 points on Saturday.

2019 5-11 SG Jordan Bragg (New Manchester): The southpaw has emerged over the summer as one of the most dangerous outside shooters in the state. Bragg sank 9 threes on the day and finished with 8 points, 4 rebounds and 4 assists in the All-Star game. Bragg averaged 12.5 points as one of the event’s best sharpshooters.

2019 5-11 PG Alijah Huzzie (Heard County): Coming from little Heard County, Huzzie more than held his own. A real stat sheet stuffer, the 20+ point per game scorer in the high school season proved he could do more than just fill it up. He averaged 9.5 points per game and in the All-Star game tallied 8 points, 4 rebounds, 6 assists, 3 steals and picked up the game-saving block on 6-foot-4 PJ Carter with seconds remaining.

2020 6-5 W Ra’Sean Frederick (Therrell): Frederick was a revelation in camp, blending physicality, skill and finesse to torch defenses. The lefty averaged 17 points per game and affected the game on both sides of the ball averaging 6 rebounds, 4.5 assists and 3.5 steals.

2021 6-4 W Logan Turner (Centennial): The young slasher averaged 11.5 points per game scoring from the perimeter and working his way to the basket. Running the floor led to easy baskets in transition. He finished with 13 points, 4 rebounds and 2 assists in the All-Star game.

2019 6-4 F Jaiden Julian (Hillgrove): Another veteran Hawk, the Hillgrove product was consistent over his first three games averaging 13 points per game. Julian slashed to the basket and played inside-out, hitting a three in each game.

2019 6-1 G Josh Favors (Creekside): Tough was a word that could be used to describe Favors’ performance. Entering with not much of a track record at the high school level, Favors tore it up with his aggressive style of play, scoring on all three levels. Favors led the event in scoring, pumping in 20 points per game and hitting 20 points in the All-Star game.

2020 6-4 W PJ Carter (Langston Hughes): Over the course of his first three games, Carter netted 15 points per. His size and scoring touch was apparent. He will have an opportunity to take over for Landers Nolley and try to guide Langston Hughes to a third straight title.

2019 6-4 W D’Antaye Page (Westlake): Page continued his scoring binge from the travel season, putting up 15 points per game and going for 19 points and 5 rebounds in the All-Star game. After a quiet junior season at Westlake, Page has had a loud summer as he tries to carry momentum into his final year.

2019 6-5 W Kanaris Cummings (Cedar Grove): Cummings was outstanding with his relentlessness. The slasher was involved in almost every play and lived in the paint. He averaged 9.2 points and 8 rebounds as the ultimate energy guy. His length led to 5 steals and 2 blocks.

2021 6-1 G Christian Callahan (Dutchtown): Callahan did not play like a rising sophomore. The now healthy guard was mature for his age and found a niche to provide consistency. He hit the outside shot played solid perimeter defense. Callahan averaged 10.7 points per game.

2020 6-0 PG Donovan Shipp (Sequoyah): In an exposure camp setting, Shipp proved to be a true point guard electing to play his game and get his teammates involved. He rebounded exceptionally well for his size and averaged 7.6 points over his first three games.

2020 6-0 PG Roman Son (Therrell): The Therrell Panthers will be in great hands with Son running the show for another season. He had some great drives to the basket, finishing through contact. Son’s competitive spirit will lead Therrell to another big season. He averaged 14 points per game on Saturday.

2019 6-3 SG Kaleb Wallace (Westlake): Over the course of his first three games, Wallace proved that he could score the rock, averaging 13.3 points per game. In the All-Star game he added 6 points and provided some flair.

2020 6-2 SG DeAndre Brown (Therrell): After a slow start to the day, scoring 4 points in Game 1, Brown found his stride and scored in waves. In his final three games he averaged 23.6 points. Brown drilled 3 of his camp-high 11 three-pointers in the All-Star game as he finished with 17 points, 5 rebounds, 3 assists and 2 steals.

2021 6-0 SG George Pridgett (Roswell): Pridgett had as strong a case of anyone to make the All-Star game. The rising sophomore is a flamethrower from deep. The lefty ended his day with 15 points and 6 rebounds. He drilled 6 threes over the course of the event and averaged 13.3 points per game.

2020 6-6 F Javanni Brown (Johns Creek): The long forward broke out in a big way in his final game of the day exploding for 22 points. He buried 3 threes and used his size to finish around the basket.

2021 5-8 PG KJ Webb (Langston Hughes): Small in stature with plenty of room to grow, Webb handled the ball exceptionally well and had no problem playing role of playmaker. Webb can shift gears and create easy looks for teammates.

2019 6-5 F Chancellor Wright (Mays): Wright played with energy and defended multiple positions. He crashed the glass and scored around the rim. The lanky forward was consistent averaging 8 points per game.

2022 5-11 CG Gaddis Heath (Douglass): One of a handful of rising freshen in camp, Heath excelled at rebounding from his position. He showed he could hit the open three and got to the rim on occasion. Defensively he made some nice plays.

2021 6-3 W Bryce Wilson (Dacula): As Wilson grows his confidence and IQ, he will become better and better. Wilson did a nice job of playing glue guy, chipping in on the boards and helping on defense. He posted games of 8 and 6 points. Wilson could be a usable piece for his father at Dacula this upcoming season.

2021 6-6 F Eli’sha King (Tri-Cities): King was one of the camp’s most consistent rebounders. He had a steady motor and converted around the hoop on offense. King averaged 8.3 points and flirted with a double-double on numerous occasions. He snagged 13 rebounds to open camp.

2020 5-10 G Nicholas Goldsztein (Walton): Goldsztein provided good minutes at the guard position. His floor vision was among the best at camp. He often made the right decision and played within himself. Goldsztein knocked down the open three throughout camp and averaged a steady 5.3 points.

2021 6-2 F Alexander Zwerner (Westminster): A soft touch and a nose for the ball characterized Zwerner’s productive afternoon in which he averaged 7.6 points. Zwerner scored from 15-feet in and knocked down the perimeter shot when given to him. He had deceptive quickness and enough handle to get in the paint.

2021 6-7 F Davorian Rudolph (Tri-Cities): It will be very interesting to see how Rudolph develops his game. At 6-foot-7, there is plenty of intrigue around the slim forward’s skill set. Rudolph showed he could attack the basket off the bounce but also hit a three in each of his three games. He averaged 5.6 points per game. With the proper work, there’s a chance that Rudolph will be a name you hear a lot more of over the next three years. 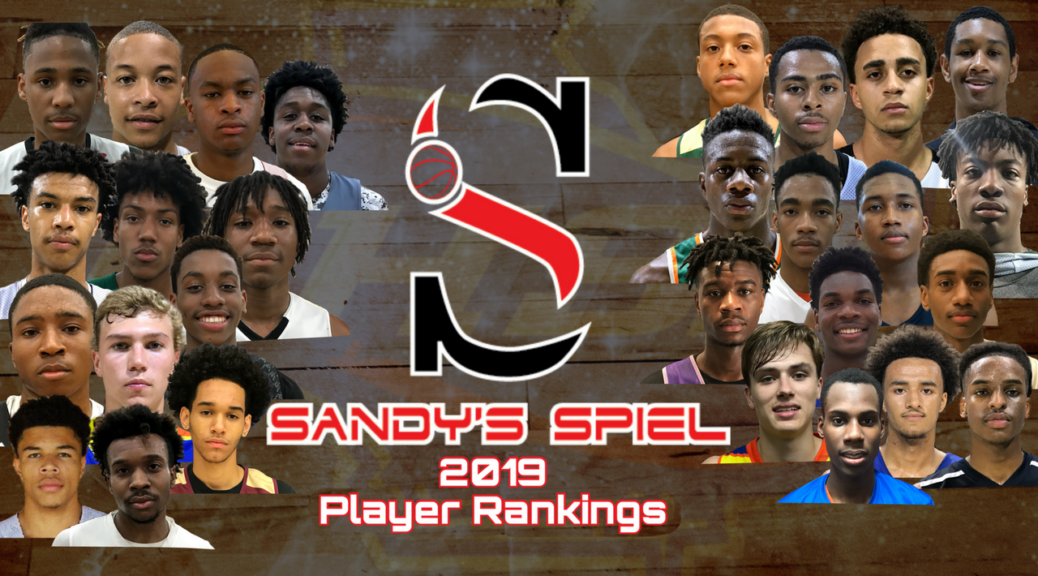 JOIN THE CONVERSATION AND TWEET QUESTIONS TWEET @SANDYSSPIEL/USE THE TWITTER HASHTAG #AskSpiel. QUESTIONS WILL BE RESPONDED TO DURING THE RECORDING OF NEXT WEEK’S SPIELIN’ & DEALIN’ PODCAST.

*NO TWEETS WILL RECEIVE RESPONSES ONLINE*

DISCLAIMER: If you are not listed, that does not mean you are not an exceptional player. There will be players omitted from this list that will go on to have outstanding senior seasons and collegiate careers. Use these rankings as motivation to become the best player you can be. The state of Georgia is wide and vast with many talented players. With that said, here are my picks for the Top 20 players at each position.