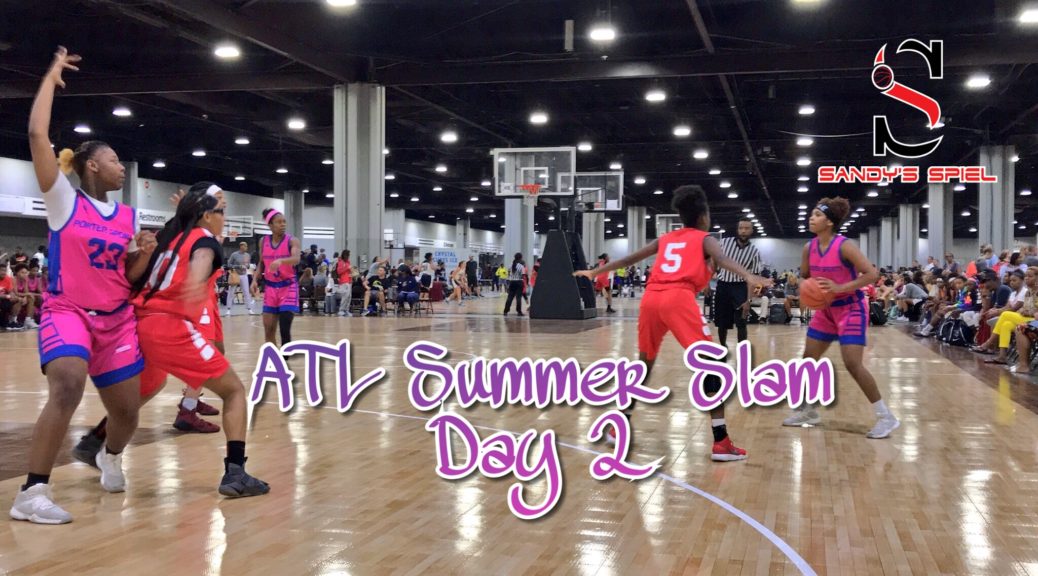 2019 6-3 Kyndall Golden (New Manchester) double-doubled in a loss with 13 points, 14 rebounds and 4 blocks. Golden is a lane clogger with her size and length. She is an average athlete that doesn’t try to do anything she’s not capable of. She did a great job of crashing the offensive glass and keeping rebounds high. She showed a lefty hook in the lane.

2019 5-10 F Jada Griffin (Northwest Whitfield) is more of a center during the high school season, but on the travel circuit she fits more as a slashing small forward or a quick power forward. Griffin brought great energy as she cleaned the boards and tried to get to the rim. She had 8 points, 9 rebounds and 1 assist. Her physical frame and quickness gives her value as a combo forward. She hit one jumper on the day and will need to continue to improve her outside shot.

2019 6-0 PF Taziha Fanning (Harris County) did her usual damage inside, hanging 19 points, 9 rebounds and 1 steal. Fanning, an All-State big, is a physical power post that uses her sturdy frame to move defenders out of her way. Fanning is a strong rebounder. She sticks with it even when she gets her shot blocked, on numerous occasions regathering herself and powering through for a bucket or a foul. She has decent footwork on the low block and knows what her strengths are. At the foul line her free throws are very flat. She shot 44% from the line as a junior.

2019 5-7 PG Kennedi Miller (McIntosh) didn’t score but she managed to keep the pressure on the defense with hard drives to the basket. After failing to convert at the rim on her first attempts, Miller made the smart decision to finish her rim runs with a dump off to her bigs on the block. Her ballhandling and her defense kept her on the court in a close game as she finished with 2 rebounds, 2 assists and 3 steals.

2019 6-0 SG Kai Carter (Paideia) looked good before going down with an ankle injury and having to get carried off the court. Carter is a long athletic guard that is best when slashing to the hoop. She had 8 points, 3 rebounds, 1 assist and 2 steals. She didn’t show it on Tuesday, but if she has a three-point shot in her arsenal, it wouldn’t be hard to see her attracting some serious D-I interest.

2019 5-10 SG Summer Dilwood (Tucker) is another good looking long perimeter player. She hit a three and finished with 7 points, 6 rebounds, 2 assists, 2 steals and 1 block. Her activity on defense shone through in a 50-43 loss to 16U Gauchos.

2019 6-1 C Kennedi Manning (Arabia Mountain) is a svelte agile post that has the length to block shots and clean up misses. She had 5 points, 9 rebounds and 3 blocks. She provided good effort in the paint but could be even more aggressive when trying to score inside.

2021 6-4 C Jill Hollingshead (Holy Innocents’) responded in a big way on Day 2. After opening the tournament by floating around the three-point line, Hollingshead got in the paint and battled with Natalija Marshall. She tallied 12 points, 8 rebounds and 6 blocks. Hollingshead’s length gave the 6-foot-5 Marshall and the rest of Exodus some issues when getting in the paint.  Hollingshead is still learning her craft and identifying mismatches will make her an even tougher cover once she matures.

2019 5-7 PG Alea Spears (Brookwood) was a bowling ball of competitiveness. She had a quiet Summer Slam opener but brought it on the big stage against two of the better guards in the event. Spears was good in transition pushing the ball down the floor. She played solid defense and hit shots on offense on her way to 12 points. Here compact build let her absorb contact and finish when getting to the hole.

2019 6-0 F Kierra Adams (Brookwood) displayed her versatility. The talented forward scored inside and out, hitting a pair of threes in her 14-point outing. Adams has the size and skill to play 1-5 during the high school season.