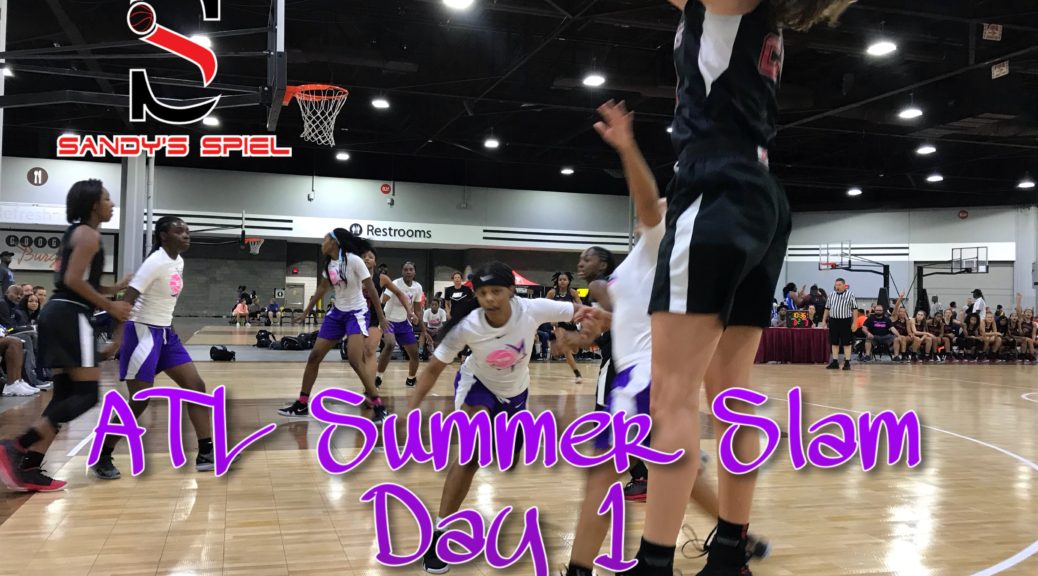 2020 6-0 F Sophia Singer (Woodstock) provided a major spark off the bench, hitting two threes during a stretch in the first half that gave Team Slink the lead for good. She scored all 9 of her points in the half and grabbed 3 rebounds.

2019 5-10 W Markiema Lancaster (Northview) came out of the gates hot for the Lady Rebels, brining intensity on defense and a slashing mindset on offense. She picked up 8 points, 2 rebounds, 3 assists and 3 steals. Quick and versatile, Lancaster is capable of defending multiple positions while able to help facilitate on offense.

2021 6-4 F Jillian Hollingshead (Holy Innocents’) finished with 9 points, 7 rebounds, 1 assists and 1 block. With a major size advantage, Hollingshead strayed away from the paint and instead handled guard duties. Her ball handling was impressive for her size, able to get to the bucket on occasion, but I felt like she could have been more effective down low. I would like to see her work inside-out instead of outside-in with her exceptional length. Her quickness as a face-up post presence could be a matchup nightmare but instead she started her touches catching at the three-point line. Long term, having those guard skills at that age and at that height make Hollingshead a future High Major prospect. Clemson, Minnesota, VCU, Western Kentucky, UIC, Western Carolina, Detroit-Mercy, Old Dominion and Ohio were a few of the schools in attendance for the Lady Rebels’ 50-47 loss to Michigan Storm Elite Taylor.

2021 5-5 CG Mariah Baltierra (Norcross) didn’t make the biggest dent in the score book, but her feel for the game and her decision making caught my eye. Baltierra came off the bench and provided important minutes in the Rebels’ 57-44 victory. Her IQ was apparent as she was always willing to make the extra pass and was able to probe the defense until she found something her or a teammate liked. She had 6 points, 1 rebound, 1 assist and 1 steal.