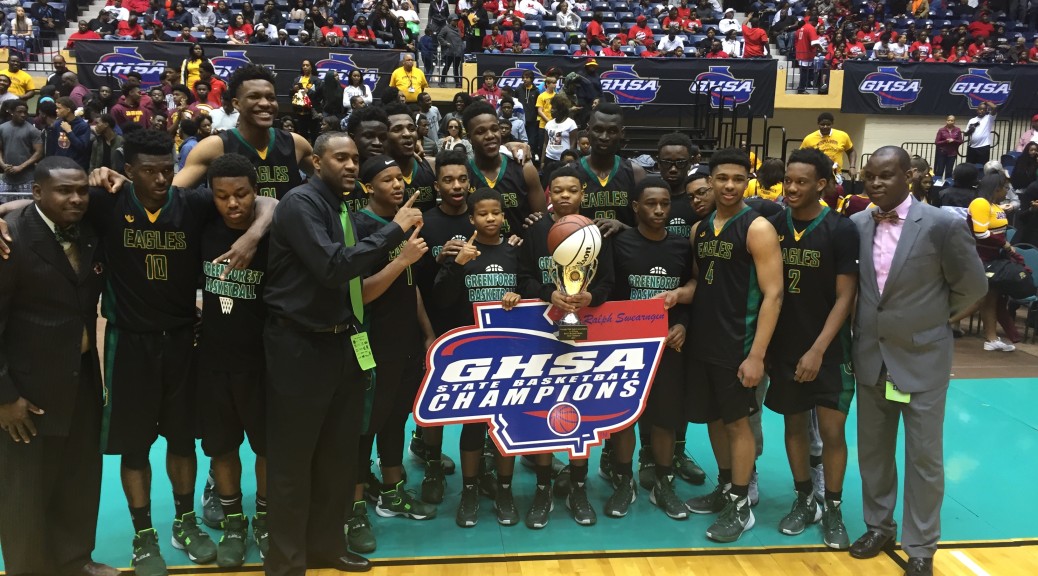 Following a disappointing 96-81 championship loss at the hands of St. Francis last year, the Eagles were prepared to slow down five-star McDonald’s All-American and Arizona-commit Kobi Simmons in order to end the Knights’ quest for a three-peat. Behind a dominant defensive performance and a relentless attack from New Hampshire signee John Ogwuche, first-year head coach Larry Thompson and the Eagles captured their second state title in school history, 78-66 in the Class A-Private state championship.

Ranked nationally throughout the year and the owner of the No. 1 ranking in the state the entire season, Greenforest (30-2) made sure it wasn’t going to have a letdown against No. 2 St. Francis (23-8), who came in winners of 10-straight by an average margin of victory of 28.7 points. Greenforest’s size advantage was apparent early as 7-foot junior Ikey Obiagu swatted a shot and came away with a dunk before Precious Ayah, a Miami (OH) signee, added a rim-rocking jam of his own to race out to an intimidating 6-0 lead.

At the end of one, the Eagles led 12-7. Simmons was held scoreless. Obiagu was a difference maker after being a complete non-factor in last year’s loss. The big man fouled out in the fourth quarter but scored six points, grabbed seven rebounds and blocked six shots while on the floor.

Block No. 4 for Ikey pic.twitter.com/U3XEkbLkvM

Greenforest went up 17-8 after Ogwuche found Justin Forrest for an And-1. At the 4:53 mark Simmons finally found the bottom of the net, sinking two free throws to make it 19-13. Simmons did much of his damage from the line as the Eagles focused their game plan around stopping the highly touted recruit, holding him to 8-of-25 shooting; 12-for-18 from the line worth 31 hard earned points.

After Ogwuche pitches ahead to Justin Forrest for an "And-1" pic.twitter.com/5BrtwWbKhD

“That was the game plan,” said Thompson. “We knew he was going to get touches but we didn’t want those touches right on the three-point line. 35-feet out so we could run a second guy at him because I face-guarded him all night. I didn’t want him to get comfortable on that wing and do what he does best, score the basketball. So we had to make him uncomfortable.”

Kobi is 2-of-13 from the field 12p pic.twitter.com/lEO4fwnYKH

As much as Simmons struggled in the first half (9 points on 1-9 FG), the Knights kept it close. Wallace Tucker drained a three to close the lead to 26-24 with 1:06 left. Ogwuche hit a back-breaking jumper at the horn to build the Eagle lead to 34-25 at the half.

The Eagles came out guns a’ blazing in the third quarter to take a 41-27 lead after Obiagu hit a layup and Ogwuche buried two threes. The senior burned St. Francis for 28 last year in the finals and did it again this season, torching the Knights for a game-high 27 points and five assists connecting on a whopping 14-of-23 free throw attempts while assaulting the rim.

“Wow. What can I say that he didn’t do today? Justin [Forrest] had foul trouble. Jandan [Duggan] had foul trouble. John wouldn’t take no for an answer. He wasn’t losing that basketball game. He put us on his back in the second half [16 points] and willed us to victory. Kid wanted the ball. New Hampshire is getting a heck of a guy next year.”

The Knights trailed by as many as 16, down 51-35 in the third before entering the fourth quarter down 57-45 after Simmons and Abayomi Iyiola traded buckets.

Greenforest was the team to beat all year long but now that the Eagles have the trophy to go along with their great resume, the target is undeniably placed on their back heading into next season.

“That was the goal. We were here last year on the wrong end of it, feeling bad. Guys worked all year. It’s an incredible feeling to beat St. Francis. First class organization, first class program.”