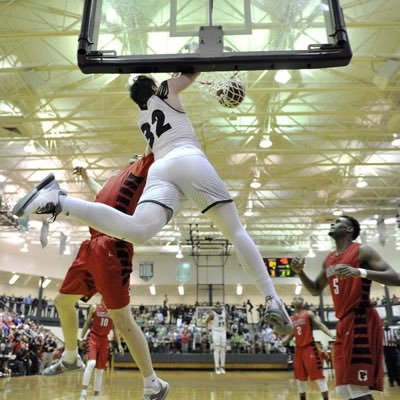 This place is PACKED.

In front of a sellout crowd at home, No. 3 McIntosh (28-2) survived No. 6 Gainesville (21-6) to advance to the Elite Eight for the first time in school history as a program-changing senior class played its final game at The Tosh. It was only fitting that over the emotional roller coaster of a season which included Isaac Kellum’s crosstown transfer from neighboring Fayette County High School to be red-flagged causing him to miss the first 13 games of the season, that his presence late in the fourth quarter along with the rest of a battle-tested senior class and a finish you had to see to believe, would lift the Chiefs to a date with No. 5 Riverwood at Columbus State on Friday.

Even with the electricity in the air, an imposing obstacle stood in McIntosh’s way in the form of the D’Marcus Simonds-led Gainesville Red Elephants. Simonds, a Georgia State signee, and the rest of Hall County’s finest came out firing. After Wofford signee Dishon Lowery got the Chiefs on the board with a physical move inside against Bailey Minor, the Red Elephants began to spread the Chiefs out on the perimeter and started knocking down open looks created by Simonds who finished with four assists.

The break-neck pace resulted in Lowery picking up his second foul just seconds after throwing down a vicious one-handed slam on Minor. Gainesville held a 19-8 lead late in the first thanks to three three-pointers – two from Harry Oliver – but Will Washington sparked a 4-0 run to end the quarter trailing 19-12.

In the second quarter Gainesville sophomore Xavier Bledson entered the game for Coach Benjie Wood and made an immediate impact. He drove the lane and went behind the back to KJ Buffen for a flush before later receiving a pass atop the arc, ball faking causing his man to fly by and calmly sinking one of his two triples in the frame, giving Gainesville a 30-20 lead.

As Bledson was making plays off the bench, the capacity crowd slowly started to quiet as a raucous Gainesville following cheered on the Red Elephants. Gainesville took its largest lead, 37-24 midway through the second before Furman signee Jordan Lyons drained one of his three deep balls in the game to bring the deficit back to 10.

Washington, Lyons and Kellum combined to score 23 of McIntosh’s 25 points in the quarter as the Chiefs entered the half down 46-37 after Simonds pumped in nine points in the quarter while the Red Elephants drilled six threes in the opening 16 minutes. Eight players scored for Gainesville in the first half causing headaches for Coach Jason Eisele who at the moment looked as if he had finally run into a team that could match his own’s firepower.

The first three minutes were crucial coming out of the break. Either Gainesville was going to step on McIntosh’s neck and not let them back in the game, or the Chiefs would find one last way to go out with a bang in front of the Peachtree City faithful.

The Chiefs opened with a quick 4-0 spurt sparked by Washington’s theft of Simonds near midcourt, closing the lead to 46-41. After the two teams exchanged buckets, Coach Wood called for timeout while the home crowd roared in full throat.

McIntosh continued to crawl back in the game, but Simonds did everything in his power to thwart the comeback, catching back to back alley oops from Messiah Dorsey with a layup sandwiched in between.

Washington netted six points in the first four minutes to draw McIntosh within striking distance before it was Lyons’ turn to swoop in for two quick acrobatic finishes to give the Chiefs their first lead since 2-0, 54-51 with 4:11 remaining in the third.

Back and forth the two teams battled. Simonds rejected Washington on a fast break.

Soon after, Lyons splashed a three to tie the game back at 58 followed by a Washington steal and two-handed throw down on a fastbreak to make it 60-58 in favor of McIntosh. The Chiefs pushed the lead to 63-58 with 26 seconds left when Lowery gobbled up one of his game-high 15 rebounds and outletted a perfect ball to Washington for an And-1 layup; Washington exploding for 13 points in the quarter and a team-high 31 for the game.

But of course, Gainesville, who had battled its own share of adversity all season long, quickly tied the game at 63 with a Dorsey layup at the buzzer after a steal.

Messiah Dorsey lays it in at buzzer pic.twitter.com/Xb47gpDtJA

The fourth quarter will become folklore in the McIntosh history books and a bitter pill to swallow for Gainesville.

Again, both teams battled trading bucket for bucket with highlight finishes galore. Buffen gave Gainesville a quick lead on a putback dunk making it 65-63. Over a minute later Lyons connected on back to back hoops to regain a 70-69 lead. Every time it looked like one team would take a comfortable lead, the other squad’s star would take over. Simonds poured in 13 of his game-high 34 points in the final quarter scoring at will while attacking the rim.

At the 3:23 mark, Buffen fouled out with six points and seven rebounds with Gainesville trailing 74-73. Kellum sank both free throws after the foul pushing the lead to three points with just over three minutes separating each team from an Elite Eight appearance.

Gainesville edged back ahead on consecutive baskets via Simonds, highlighted by a dunk making it 77-76.

On the right block Lowery felt pressure in the post and kicked out to Kellum in the corner for a potentially momentum shifting three-pointer making it 79-77 with 2:24 left, Kellum’s 12th point of the game. Gainesville tied it back up at 79. Washington streaked to the hoop and laid off a pass for Lowery for an easy finish regaining McIntosh’s lead at 81-79. Bledson picked up his team-leading fifth assist off the bench coming off an inbound to Michael White for Gainesville’s only three-pointer of the second half, the Red Elephants back on top 82-81 with 1:11 remaining.

Washington snaked his way into the lane to snatch the lead back and after a Gainesville miss and a Lowery rebound, the big man was sent to the line for a 1-and-1 with 36.9 seconds left and McIntosh up one. Lowery nailed the first, but the second hung on the rim and rolled off the front lip as if a gust of wind blew it ever so slightly causing it to fall astray, setting up the wildest finish of the GHSA season.

Simonds quickly tied the game at 84 with 21.9 left. McIntosh moved the ball up court and took a timeout with 8.4 remaining. The following play, the ball was deflected out of bounds with 5.2 seconds left, giving McIntosh a chance to throw it in underneath Gainesville’s hoop.

With the best passer in school history taking the ball out, Gainesville somehow lost track of 6-foot-6, 215-pound senior Chase Walter in the corner. Walter darted into the paint as Simonds vacated the area to account for Lyons popping out to the top of the key. As he did that, Minor forgot to check his rear view mirror and Walter snuck in behind him, received the pass from Washington and stuffed in a two-handed slam with 1.1 seconds left while taking the foul from Minor, a gym-shaking And-1.

The crowd erupted, the McIntosh players went nuts and sound of the whistle was not at first heard. As everyone tried to regain their composure to figure out what just happened, valuable seconds ticked off the clock during the chaos. The three-point play and whistle occurred with what looked like 4.2 seconds left.  The referees gathered and had a decision to make. Put time back on the clock or leave the Red Elephants with 1.1 seconds.

The crew decided to stick with the 1.1 ruling, meaning Gainesville would need a miracle after Walter sank the free throw to make it 87-84. Gainesville whipped a pass to Dorsey just inside mid-court for a last second heave. The senior’s shot looked on target but fell a few feet short as the Red Elephants season ended and the standing room only crowd celebrated.