A talented Riverwood program looking to establish itself as a playoff regular in Class AAAAA got off to a great start by beating rival Holy Innocents’ in an exciting affair. The Bears entered ranked No. 6 in Class AA and had to travel all of 0.9 miles to make it to Riverwood. In my preview of the game, the center of attention was split between big men Brent Duncan of Holy Innocents’ and Kohl Roberts of Riverwood. In the end, a particular X-factor I singled out helped keep the Bears in the game while Duncan struggled inside.

Riverwood held a 13-12 lead after the first period and drilled three three-pointers, an aspect of the Raider offense that wasn’t necessarily a strength in 2014. Charnchai Chantha provided a major lift off the bench for Coach Buck Jenkins’ team, hitting three treys on the night and finishing with a team-high 13 points. While Chantha and the rest of the guards were cooking on offense, Roberts picked up his second foul at the 6:35 mark of the second period with the Raiders leading 13-12 still. He would sit the remainder of the half and enter the break with just two points.

The Raiders extended their lead with Roberts on the bench and went on an 8-0 run to make it 21-12 before Cole Smith would score the Bears’ first points of the second quarter at the 2:54 mark and would go on a personal 5-0 run to draw closer. Holy Innocents’ cut the lead to 21-20, but Isaiah Gaddy, who’s play and energy while Roberts was on the bench was paramount to victory, drilled a three at the buzzer to take a 24-20 lead into the half.

Much like the second, the Bears hit another early dry spell to open the half while Roberts began to dominate inside. He scored seven of his 11 points in the third and finished the night with seven boards.  The Raiders went on a 16-5 run to go up 40-25 and had Holy Innocents’ on the ropes as entering the final quarter it was a 47-31 advantage for the host Raiders.

In the fourth quarter, Jules Erving took over. Three and-ones in the period helped spurt a 10-0 Erving run all by himself as he drew the Golden Bears within seven at 47-40 with under five minutes to play. Erving went off for 11 of his game-high 19 points in the final frame and willed the Bears back into the game.

Roberts however, would silence the run with a coast-to-coast drive inside and began matching Erving play for play with incredible skill, blocking shots and leading the charge down the court. Roberts’ bucket stunted Holy Innocents’ momentum and Coach Terry Kelly’s team would never get closer than six points, 52-46 with 33.6 seconds remaining.

Turning Point: With the lead cut to 47-40 with under five minutes to play, the Golden Bears had all the momentum behind Jules Erving’s play. It was the veteran big man who was saddled with foul trouble in the first half that would make one of the biggest plays of the game. The 6-foot-6  Kohl Roberts blocked a shot, led the fastbreak and hit Elijah Johnson who was rejected by Erving, but was rewarded the two points after the block was determined a goaltend.

Highlight of the Night: Jules Erving’s putback slam ignited the crowd and helped spark a personal 10-0 run in the fourth quarter that clawed the Bears back into the game.

My Take: I knew Riverwood had a horse inside, but I wondered what they could do from the outside. It was baptism by fire for Coach Jenkins’ bunch as Kohl Roberts hardly made an impact in the first half due to foul trouble. Elijah Jenkins, Charnchai Chantha and Elijah Johnson did a wonderful job of controlling the tempo and swinging the ball around the perimeter for open looks. The Raiders hit seven big threes on the night. The unsung hero for me was Isaiah Gaddy, who’s athleticism took over defensively. Gaddy finished with six points on two deep balls (one at the buzzer) and also added four rebounds, two steals and four blocks. Roberts is deserving of Division-One looks. He might not be as athletic as some other top flight athletes, but he understands how to use his body and is extremely strong. His ball handling skills are underrated as he was not afraid to speed the ball down the floor and find the open man. On the Holy Innocents’ side of things, Cole Smith proved deadly from deep and finished with 13 points. Ibrahim Shabazz started out strong with five first quarter points but did not score again. Both Harrison Cobb and Richard Surdykowski hit the boards well. Jules Erving showed that he is dripping with potential. Brent Duncan struggled inside, trying to dunk everything close, but would get stripped or blocked at the rim. He scored the Bears’ first two points of the game and didn’t score again until 33.6 seconds left. It was a tough opener for him, but I’m confident he will be able to bounce back and the Golden Bears should be just fine. 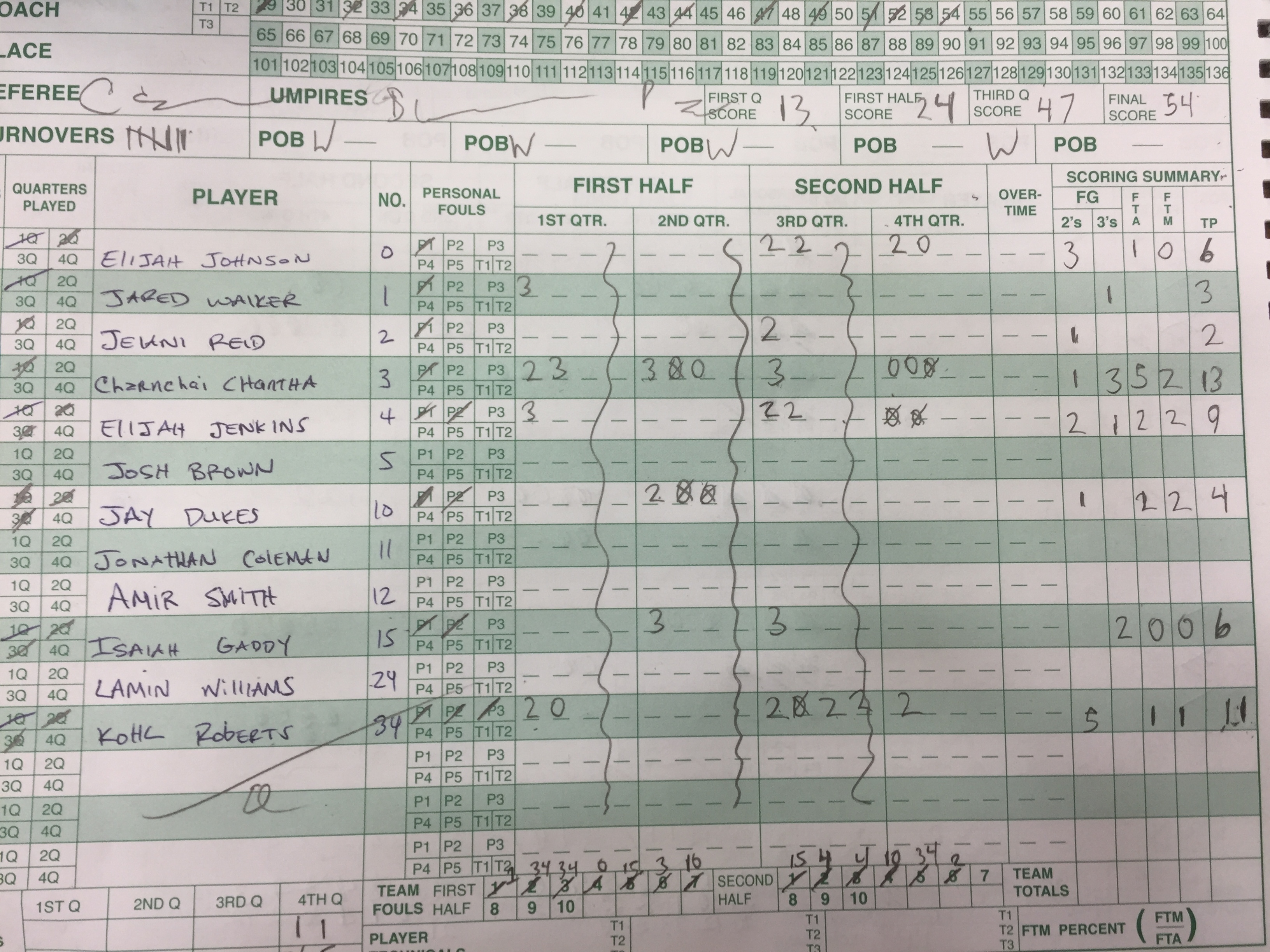 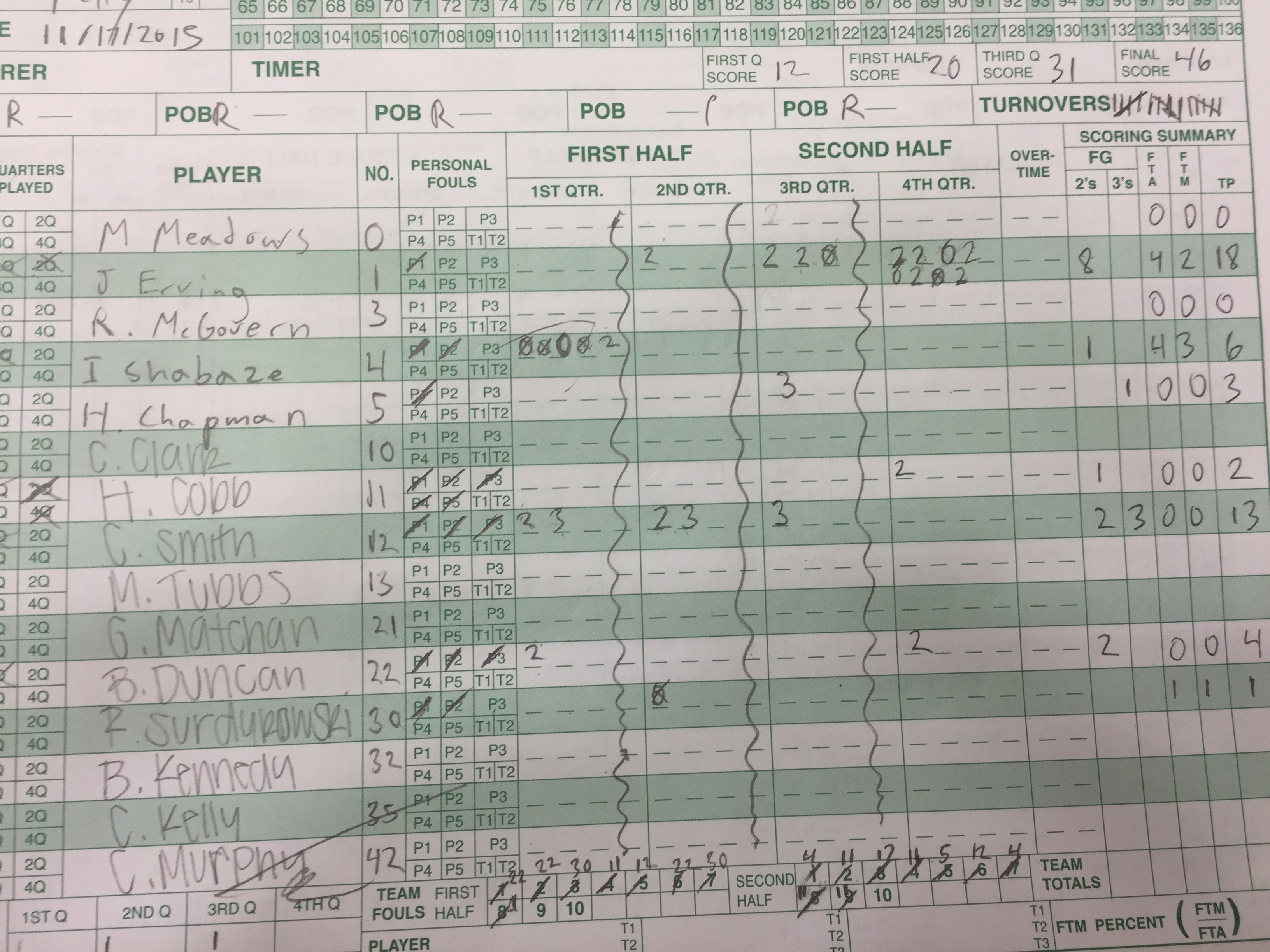