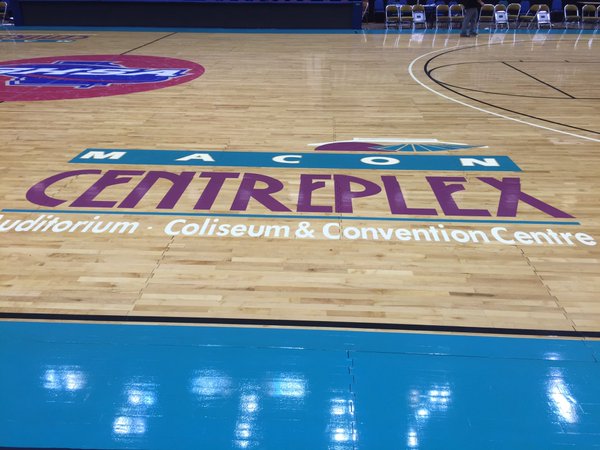 The Macon Centreplex must be put to bed and the GHSA needs reformation. The 2015-16 state championships were held this weekend with some of not only the state’s best players and teams participating, but some of the nation’s most highly regarded programs and college prospects.

So tell me why the GHSA has decided to treat the sport of basketball like the red-headed step child and put together another sloppily run event?

Team buses being charged $20 to park. Yes, TEAM buses. The teams PLAYING in the event itself were trying to be swindled to pay to park at their own state championship game. Embarrassing.

Not as important as the action on the court, but what about the lack of WiFi or cell phone service in the “building”? Extremely difficult for fans and media to stay connected to those not trapped in the prison without bars. How about the lovely foam padding on the back board that was sagging off during the first night? Luckily someone had the sense of mind to tape it up for Day 2, but it’s not like they knew they were going to be playing games there all weekend right? How about some foresight and preparation to make sure the facility is in tip-top shape?

Of course they won’t be able to fix all the cracks and miss-matched pieces of wood on the court, but it’s not like that matters. Remember, this is basketball, not football. The nice dirty diaper left under one of the seats in the building is also a great atmosphere setter for fans so they know they are in one of the nicest facilities in the state, ready to watch some great basketball!

Something tells me tiles for a portable basketball floor are supposed to fit better than this. #ThisCantBeSafe pic.twitter.com/7hSM0wRXgm

Tape on the rims also makes everything cozy. Speaking of cozy, how about on Thursday night when half the lights in the gym weren’t turned on? If you wanted to catch a nap, go sit in the top row of the coliseum. Dark as night up there and you won’t be able to hear anything except Charlie Brown’s parents as the PA system was a garbled mess.

Security was on its toes too as a photographer, who had a slight seizure in a scary moment, wandering onto the court in the middle of the game. Did security rush out to stop him? Nope. It was the referee having to direct him off the court and hold him there for a few seconds before security finally came onto the floor to make sure he wasn’t a threat to any of the players or coaches.

In the middle of the game, this happend… Gotta love Macon pic.twitter.com/UevfGGCtKQ

Do you think the GHSA/Georgia Dome would allow a fan to mindlessly walk on the field in the middle of play in the football championships? I surely doubt that. Security would guard the sidelines like a hawk because they know what is at stake in the game and they understand people’s safety is paramount.

And of course, would they play football on a non-regulation sized field? No you say? So then why the hell did basketball play on goals that were not at the correct length?

Interesting that the backboards are off line at the Centreplex. Hoop is too far back. No space underneath. 🙄🙄🙄 #GHSA pic.twitter.com/f8SU3qFoKM

@KyleSandy355 Chat with WBHS Coach the day before their 1 point loss on a missed free throw. pic.twitter.com/VF7V0tFdy3

GHSA Executive Director Gary Phillips had this to say:

“Only one coach even mentioned a possible problem, and my basketball staff watched the games closely and did not notice any appreciable effect on the shooting or the play of any of the teams. Some of the teams even shot extremely well from both the floor and the free throw line. But, overall, it looked like typical championship play.

“While this certainly was not an ideal situation or one that we wanted to have happen, we think the conditions were fair for all the teams. And, more importantly, it was the same for all the teams. We have plans to make sure this never happens again, but we have no plans to change anything that happened this week in Macon.”

What players are looking at when they shoot a free throw in Macon today. @CraigSagerJr @KyleSandy355 pic.twitter.com/NOaE48DAF5

Get the heck out of here.

Looked like typical championship play? Well that’s tough to judge since no one from the GHSA watches a game until the final month of the season and probably can’t remember the outcomes of last year’s games anyways.

Here are the cumulative shooting percentages for both the boys and girls games and you tell me if these look like usual numbers:

I’m sorry, but that looks a little low to me. There was some great defense being played, but when free throws are a foot or two longer, so is the three-point line. You couldn’t even drive baseline or grab a rebound inside because you were two feet out of bounds while doing so.

The point is, it should have never come to this. The Centreplex is a dump and it’s not just me saying this. Ask players, coaches, fans. Georgia has premier talent. Why not let them play on a premier stage?

Is this the Centreplex or a 5-star resort?!? CRIPES! pic.twitter.com/f1W1zUnAgW

Macon is a “neutral site” and in the middle of the state you say? Why don’t they play the state championships in football there? Sorry, but the Dome isn’t sold out so I don’t want to hear seating as the main issue. Why can football play in the state capital while basketball needs a map for people to find where it is? And look at home many teams are from the Metro Atlanta area that you are making travel just to help out a handful of teams. Again, it didn’t matter during football season, why should travel matter now?

If you won’t change the city of location then you better find a nicer venue in the area but who knows if anything will come of it. The GHSA has shown their utter disregard for the importance of basketball by not bothering to fix the basket error for the final day citing it would take an hour to do and would delay games. I guess they forgot that they can do it in the morning or late at night? But who cares, this is basketball.

Incompetence needs accountability and it is time for some changes. Georgia Tech, Philips Arena, the Gwinnett Arena and others all are venues that have opened days peppered throughout March, so how about we end this “March to Macon” and display our state’s best in an area where people will actually see them and not in an area where there is a blatant disregard for quality.