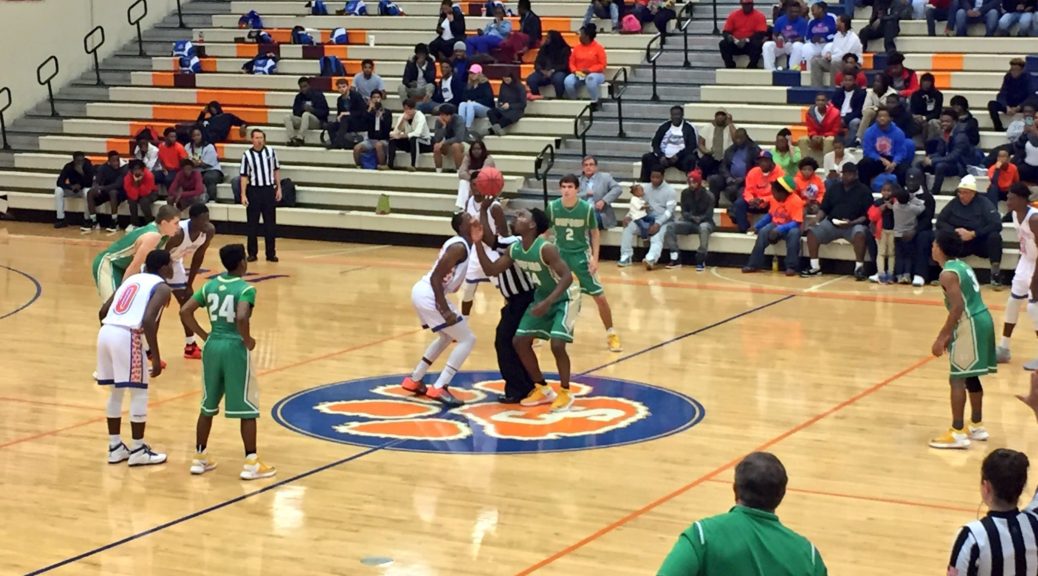 Coming off of a 59-54 overtime loss at Duluth, two-time defending Region 8 champion No. 3 Cedar Shoals was looking to get back on track. Standing in their way was new Region member, No. 1 Buford who suited up for the first time as the top ranked team in Class AAAAA.

Over the next 32 minutes, the two state powers traded blows until Buford came away victorious after a late mental error by the Jaguars.

A fast pace opened up the action as Alex Jones pushed the Wolves offense down the floor finding open men. He made sure to get powerful forward Marcus Watson in the mix early on, but Charleston Southern-signee Phlan Fleming lifted the Jags in the first quarter, gliding to the basket for six points.

Buford held a 16-11 lead after David Viti worked the glass for an And-1 and helped the Wolves finish the first quarter with a 20-15 lead.

In the second quarter starting point guard Jai’Vanni McDavid and reserve Damarrea Lowe got loose. The two sliced and diced, Lowe scoring all six of his points in the frame and McDavid netting eight of his 14 in the frame for Cedar Shoals.

As the two teams went back and forth, the one constant all night for Buford was Watson. The strong 6-foot-6 forward attacked the basket and punished the slighter of build Jaguars trying to defend him. He posted 12 points and seven rebounds in the first half and finished the game with 25 points and 13 boards.

The heavyweights entered the half deadlocked at 31, but Cedar Shoals had reason for optimism as key pieces Stavion Stevenson, AJ Jones and Snipe Hall combined for just seven points in the opening 16 minutes.

Before the Jaguars could get their footing, Jones hit Donell Nixon for the third of his six threes to open up the third quarter. Nixon, standing only 5-foot-8 on a good day, peppered Cedar Shoals from beyond the arc the entire game, the Jags losing sight of the little man as he floated on the perimeter dropping in 18 of his game-high 26 points in the second half.

Hall began to heat up for the Jaguars after a quiet first half and scored five straight to tie the game at 36, but in the blink of an eye Buford poured in a 12-0 run to take a commanding 53-40 lead, the spurt keyed by a Jones assist to Viti and then Jones and Nixon trading triples.

Up 13, Watson grabbed a rebound and tried to ignite a fast break but threw an errant pass into the chest of Stevenson who laid up an easy hoop, sparking a Jaguar run of their own. Cedar Shoals closed the third quarter on a 7-0 surge and entered the fourth quarter down 53-47.

The Jaguars ripped off 10 straight points to close to within three and eventually took the lead 60-57 as Hall and McDavid attacked Buford’s smaller guards. The 20-4 run had the home crowd in a frenzy as the Jaguars forced turnovers and picked up the tempo.

After Viti split a pair of free throws, the Jaguars somehow left Nixon open for another three, the Wolves regaining a 61-60 lead with 3:53 to play. Fifty-seven seconds later, Watson grabbed a miss and led the break, passing up to Jones. Jones took one dribble before dumping the ball off to Watson for a slam on a 2-on-1 fast break, one of Jones’ dazzling 12 assists on the night making it 63-60.

Hall answered however with an And-1 tying the game at 63 with 1:58 remaining, three of his 14 second half points. Just over 30 seconds later, it was Nixon again supplying a dagger from deep to give Buford a 66-63 lead.

The Jags were able to get a stop and raced down the court for a chance to either tie or cut it to one, but Bobby Miller came out of nowhere to poke the ball away from behind to give possession back to the Wolves.

Having to foul, Cedar Shoals sent Nixon to the line where he sank two attempts to go up five. With time ticking down, AJ Jones put on an array of moves in the corner to get free and splashed a step-back three to breathe life into the Jaguars, cutting the lead to 68-66 with 21.2 seconds left.

Nixon was sent to the line for a 1-and-1, but inexplicably as he attempted his first free throw, the Jaguars had six men on the floor, resulting in a technical foul. Nixon was awarded with four free throws and buried them all as he went 6-for-6 from the line in the fourth quarter and as a team the Wolves finished the game 18-of-22 from the stripe, clinching a wild Region 8 road victory.

No. 1 vs. No. 3 lived up to the hype albeit a sour ending to the game. Alex Jones was masterful at point guard for the Wolves. Pound-for-pound he is one of the best point guards in the state and I can fully endorse he is the best passer I’ve seen in the state of Georgia over the past two seasons, ranking in the top echelon with Will Washington formerly of McIntosh. Close to the group is also Xavier Bledson of Gainesville. Jones’ court vision is elite. He can drop dimes on the best defenses in the state. Donell Nixon was absolutely lights out from deep. Cedar Shoals had to hold their breath whenever he attempted a shot from beyond the arc. He may have missed one or two tops. Nixon was simply automatic when left open and had ice water in his veins at the line in the fourth.  Of course possibly the most important due to his X-factor ability, is Marcus Watson who moved in from North Carolina. He is a physical presence attacking the hoop but also showed the willingness to attempt threes, hitting one. As exciting as his two-handed flushes were, I was most impressed by the forward’s free throw shooting. He went a perfect 8-of-8 from the line. He has D-I written all over him. He and Nixon are just sophomores. Scary. Even scarier? David Viti and Jones are still juniors and senior Sahil Patel isn’t even playing due to a knee injury. And by the way, the biggest play of the game bar none? Bobby Miller’s chase down steal on the fast break. That was HUGE.

Cedar Shoals could have laid over and died when Buford stunned them with a lightning quick 12-0 run, but the heart of a winner can’t be taken for granted. The Jaguars are some junkyard dogs that don’t fold when games get tough. Last year it was Jerrick Mitchell powering the offense at the point and now this year it was Jai’Vanni McDavid, a junior, that did it all for Coach L’Dreco Thomas. The Jags don’t have the D-I sex appeal that other programs have, but their players play hard. McDavid finished with 14 points, 5 rebounds and 5 steals. Damarrea Lowe, who I loved at the Miller Grove Shot Clock League, gave the Jaguars a spark in the second quarter and is an exceptional guard off the bench that could start for most teams. AJ Jones and Snipe Hall were quiet in the first half but loud in the second. Jones scored nine of his 12 points in the fourth while Hall carried the group throughout the final 16 minutes. Phlan Fleming got off to a quick start, looking smooth getting to the cup but then faded off until he hit a big three late in the third quarter. Stavion Stevenson had a quiet night inside with just four points. The Jags are yet to hit their stride but have all the pieces in place to make another run to the Final Four. Region 8 will be a dog fight between the two statewide powers.