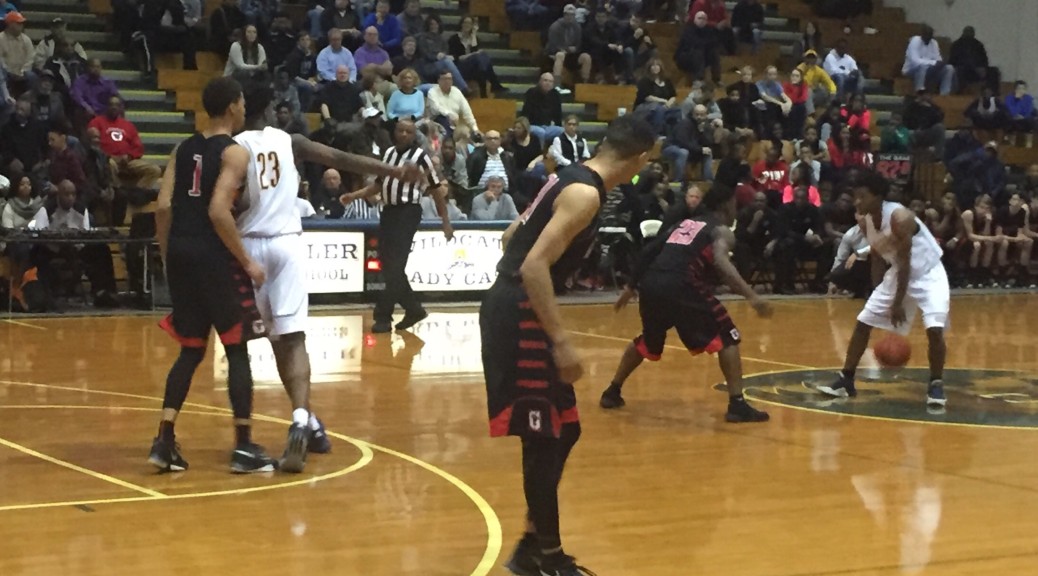 A controversial double-technical spoiled what was an outstanding game on Martin Luther King Jr. Day, as No. 3 Wheeler held off No. 4 Gainesville 82-69.

Gainesville (11-4) entered with just one actual loss and two via forfeit at Lanierland while Wheeler (14-5) strolled in with five straight wins. The litmus test that followed was as stiff as any in the state could face; the feisty Red Elephants at the six-time state champs, highlighted by last season’s 6A title team.

Wheeler entered the game without Cam Jordan at forward, leaving much work to do for the supporting cast. The Wildcats got everything and more from Makhai Eastmond and Kenny Aninye. Eastmond scored 13 points – nine in the first half – while Aninye netted 14 and grabbed six rebounds in his new found starting role. The 13-point final score was not a reflection of how the game unfolded however.

Georgia State signee D’Marcus Simonds started the three-point barrage by hitting Messiah Dorsey to open the game. The Red Elephants sank five threes in the opening period, two apiece via Michael White and Dorsey. Gainesville would finish with seven triples in the first half, but only added one more to the tally in the second half.

While the Elephants were bombing from deep, Darius Perry and unsung hero Makhai Eastmond kept the Wildcats afloat. Perry scored seven of his game-high 21 in the opening period while Eastmond hit two threes to help the ‘Cats head into the second quarter down 19-18.

Wheeler opened the second quarter on a quick 7-0 spurt and at the 6:12 mark now up 25-19 after taking their first lead of the game with 7:11 to play, Simonds picked up his third foul. The Wildcats extended their run to 16-to-4 before Simonds checked back in, the Elephants now trailing 34-23 with 3:50 remaining in the first half. Everything seemed to click whenever Simonds was on the floor and while Georgia Tech signee Romello White took a breather on the bench, Gainesville began to attack the basket. Tae Turner, who scored all 10 of his points in the first half, drove for an And-1 and cut the Wildcat lead to 36-30 with 2:06 left.

Momentum swung back into Wheeler’s favor when Perry drilled a straight away three at the buzzer to give the host Wildcats a 43-36 edge heading into the half.

HALF No.3 @WheelerHoops 43 No.4 @goredelephants 36 Darius Perry delivers a dagger from deep. He has game-high 12p. pic.twitter.com/MGpW9vVHss

With Simonds back on the floor, Gainesville made another push. He threw down a dunk in transition then added another bucket in the open floor to make it 47-44 before picking up his fourth foul 30 seconds later at the 4:31 mark.

Aminu is tough on the glass pic.twitter.com/oYjgNso3GW

The pesky Eastmond hit a jumper to stabilize things for Wheeler and would spark an 11-5 run to open up a 58-49 lead with 1:29 to play in the third. Then Simonds checked in. The 6-foot-4 guard willed his team back into the game. Within seconds of re-entering, Simonds picked up an assist, hitting Dorsey for a three and then picked Eastmond’s pocket for a layup to bring the score to 60-54. With seconds remaining and Wheeler holding for a last shot, Simonds played the passing lane, picked off a pass and exploded for a thunderous two-handed jam right before the horn to close the gap to 60-58 entering the fourth. His return to the floor ignited an 11-0 run and gave the Red Elephants all the momentum early in the final period as Gainesville had finally caught up to the Wildcats after Simonds came away with another theft up front and boomed home another slam.

On the next possession, Wheeler was sent to the line. The crowd and Simonds still amped up about the dunk, during the free throw attempts on the other side of the court Eastmond and Simonds were jawing. Simonds, known for his fiery play and emotions, finished the back-and-forth with Eastmond and began walking up to the other side of the floor to get ready for the second free throw. While Simonds approached the play, Eastmond followed close behind… a little too close for the referees as they blew a double-technical. With the game tied at 60 with 7:30 remaining and in the midst of an 11-0 run, Simonds was fouled out on the tech.

Simonds’ final line in limited action read: 14 points, four rebounds, six assists and five steals. With the playmaker fouling out, Gainesville had to turn to Dorsey and Michael White. The two combined for nine points in the quarter, but Gainesville would be outscored 22-to-9 with Simonds fouled out.

Anyine scored five consecutive points to push Wheeler’s lead to 71-67 with 2:54 remaining before Romello White finally began to wear down the smaller Elephant frontline. He scored back-to-back And-1s and sparked a 14-2 run to end the game.

Romello has had the size advantage. Just got a hoop inside. pic.twitter.com/11WGSk29eN

My Take: Gainesville looked as if it were going to live and die by the three-pointer early on in the game but the Red Elephants kept coming even with D’Marcus Simonds saddled with foul trouble. A lack of elite size inside hurt Gainesville, who used a frontline of 6-foot-5 and 6-foot-6 to try and counter Romello White’s legit 6-foot-8. Sophomore KJ Buffen, who is more of a three, battled valiantly alongside fellow sophomore Bailey Minor against White. Buffen showed flashes offensively with his 12 points, but struggled from the line going 4-of-11 including 0-for-4 in the fourth quarter. Michael White and Messiah Dorsey stretched the defense with their shooting and are great pieces around Simonds. Tae Turner played well with 10 points in the first half, but went scoreless in the second half. Minor blocked four shots, but was never able to establish himself offensively on the low block. Simonds was the best player on the floor today with his explosiveness and quick hands. His plus/minus numbers were through the roof. You take the good with the bad with the caliber of player he is. Some people might classify him as a hot-head with his demeanor on the court, but I liked his emotion and didn’t think any of it was over the top. To be blunt, the referees really botched the double-technical. It didn’t look as if any stern warnings were given and they blew the whistle on a costly interaction which took place in the heat of the moment. Gainesville deserves its top five ranking and will be a scary team to deal with in the AAAAA state tournament.

Wheeler found a way to win without Cam Jordan. As good as Simonds was, Perry was just as good but without the flash. He consistently got big buckets for the Wildcats and went 8-of-8 from the line. Game-ball might have to go to Makhai Eastmond. He is the weakest link for Wheeler but he stepped up big time and played one of his best games, hitting two big threes in the first quarter while Gainesville was on fire and later on baiting Simonds into his fifth foul. Kenny Aninye also played a great game and picked his spots when to attack. His 5-point spurt in the fourth helped give the Wildcats the lead for good. Romello White slammed the door shut with his size as Wheeler began to pound it down low. White posted back-to-back And-1s in the fourth, with the first coming the hard way, cleaning up a miss and powering up strong. He scored 10 of his 15 points in the fourth quarter and finished 5-of-8 from the line for the game. Al-Wajid Aminu didn’t have a ton of jaw dropping plays, but boy does the North Florida signee have a motor that doesn’t quit. He is always around the ball when it comes off the rim and is a glue guy that does the little things on defense. He finished with 11 points and 10 rebounds.