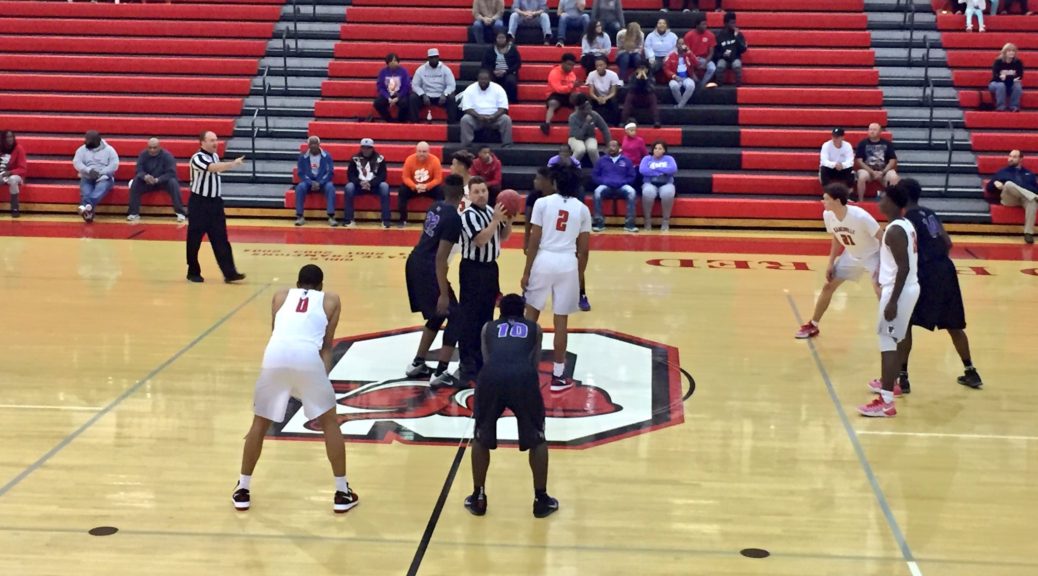 It didn’t take long for the 2016-17 GHSA season to give us a doozy of a matchup, albeit still just a scrimmage. Class AAAAAA Preseason No. 2 Gainesville hosted Class AAAAA No. 2 Miller Grove as the Wolverines took to the floor for the first time without familiar face and seven-time state championship winning coach Sharman White leading since the program’s inaugural season in 2005.

The Miller Grove machine piloted by Rasul Chester looked like it was ready to keep clicking, jumping out to a quick 8-0 lead against the hosting Red Elephants behind two Jalen Mason threes. Gainesville got off to an inauspicious start, Kajuan Hale blowing a wide open layup off the tip and struggling with turnovers, but the Elephants quickly put the slow start behind them and began to gain their footing thanks to their potent junior class.

Jarred Rosser got Gainesville on the board at the 5:33 mark and Bailey Minor chipped in the first of four three-pointers on the night to steady Gainesville. Miller Grove stifled the Elephants early, altering shots at the rim. 6-foot-7 junior Kevin Paige swatted away six shots on the night and pitched in a double-double with 11 points and 11 rebounds. A bucket along the baseline gave the Wolverines a 16-7 lead at the 1:30 mark of the first quarter, Miller Grove humming along.

Gainesville ratcheted up the pressure with their full court press and saw Miller Grove start to breakdown. The Wolverines were hampered with early foul trouble, 10 to 2 in the first quarter and Gainesville capitalized, closing the quarter down 18-16.

The length between Jarred Rosser, Jarrel Rosser and KJ Buffen disrupted Miller Grove. The Elephants consistently trapped the first pass and continued to harass the Wolverine ball handlers in the half court as well. The end result was a 31-to-5 Gainesville run that swung into a 38-21 advantage.

Hale started to assault the basket with his quickness. He scored seven points from the line in the second quarter while Minor punished Miller Grove for leaving him open in the corners, dropping in 14 of his game-high 20 points in the first half.

As the turnovers forced by the Gainesville press and the fouls continued to pile up, the flustered Wolverines unraveled, picking up two technical.

Senior Tae Hardy, an explosive scorer who will be counted on to pour in points, was held scoreless by Hale and the rest of the Gainesville defense before his first hoop at 2:16 in the second quarter, Miller Grove down 43-25.

Tae Hardy has been quiet. 2:30 left in the first half and he still hasn't scored. Trailing 41-23. pic.twitter.com/iCIlcVVYer

Giving the Wolverines a pulse was Lorenzo Anderson. The junior guard tossed in seven of his team-high 18 points in the first half.

Traditionally a strong three-point shooting team, Miller Grove’s only deep balls came in the first minutes of the game via Mason as the likes of Hardy and George Wilson struggled to find the range. Miller Grove limped into the half down 48-27, Hardy unable to connect on a tough lay-in at the buzzer.

But as any proud program goes, the Wolverines didn’t go down without a fight in the second half. Gainesville led 52-29 with 5:55 remaining in the third quarter before Paige sparked life into the Wolverines. The big man met Buffen at the rim and rejected a dunk attempt, igniting the fast break. Hardy turned it into an And-1 and missed the free throw, but that was all the microwave needed to will his team back into the game.

Hardy went off, scoring 12 of his team-high 18 points in the frame. The Wolverines chipped away with an 18-to-7 run to bring the game to 59-47 with 50 seconds left, but Austin Long banked in a straight away three and Miller Grove picked up their fourth technical of the game.

Brent Kelly followed up a Mike White miss at the buzzer and all of a sudden, a once narrow 12-point game was ballooned back up to 67-49 entering the fourth.

Wolverines cut it to 12 but lose composure. Brent Kelly put back at buzzer. Tae Hardy 12p in Q pic.twitter.com/arISjCM9r5

It’s only logical for Miller Grove to be a little down this year, but even after tonight’s performance I don’t think the Wolverines are a team to overlook. Joshua Jackmon should return by January after tearing an ACL in the offseason. His leadership from the bench was apparent tonight. Miller Grove would have loved to have the senior out there on the court. But even without the defensive ace, they played aggressive pressure defense with their guards in the half court early on, but once fouls became a problem and Gainesville was able to dictate tempo with their full court defense, everything changed. Tae Hardy was kept in check with two points in the first half. He tried to put on his cape in the third quarter, but too many turnovers and emotions for the entire team deterred their comeback. Miller Grove has talented guards, but aside from Hardy, the simple fact is they haven’t played big time meaningful minutes at the varsity level. This was a good test for them against a strong Gainesville team. The talent is there, but it will take time for the Wolverines to put it together. The lack of a lead guard that could clear out and break the press all by himself hurt Miller Grove. I’m not sure whether or not that’s a lack of expertise ball handling or just great Gainesville length on defense. The two bright spots throughout the night for Miller Grove were juniors Lorenzo Anderson and Kevin Paige. Anderson did a very nice job in the open floor and was able to finish at the cup. He looks like a guy that could emerge. He came off the bench and took a ton of minutes away from sophomore Maurice Harvey who hardly saw the floor after starting. Not positive whether it was foul trouble, injury or just getting lost in the shuffle, but Harvey didn’t tally a single stat when he was on the floor. Paige is a guy that has gotten better every time I’ve seen him. He didn’t play a whole lot down the stretch during Miller Grove’s state title run last year. I got my first glimpse at him over the summer and he has come a long way. Not just a big space eater anymore, Paige showed a great motor flying in for rebounds and turning back six shots on defense. His double-double was a pleasant surprise. Miller Grove doesn’t really run any set plays for him and let him get the ball off the glass. If he develops some post moves, he could be an interesting piece come his senior year.

Well, well, well. Gainesville has all the pieces you want to be considered a serious state championship contender in Class AAAAAA. Five players cracked double figures with two more on the verge. I’ve said it once and I’ll say it again: Bailey Minor is a college basketball player. I cannot fathom how teams let him drift to the corner unguarded for open threes. Not only did Minor can four deep balls, he showed a nice baby hook in the lane and collected seven rebounds and three blocks. KJ Buffen, Jarred Rosser and Jarrel Rosser are long glasses of water. Jarrel played atop Coach Benjie Wood’s press and made it nearly impossible for the Miller Grove guards to get past him when he would double team with Kajuan Hale and others. The Rossers and Buffen play above the rim. Buffen showed an all-around floor game with a couple smooth glides to the basket. He picked up six rebounds and five assists in the win. Hale had a shaky start to the game but he picked it up once Gainesville’s defense started to translate into offense. He’s a quick guard that has good court vision. He alongside Xavier Bledson will be sure to dish out some highlight dimes this season. Mike White came off the bench and played with a wrapped hand. Once he’s healthy, he brings another strong wing athlete that can shoot it. Definitely can’t forget about the play of Austin Long. The epitome of a role player, Long did good things when he was on the floor and hit a huge three to stymie Miller Grove’s third quarter push.