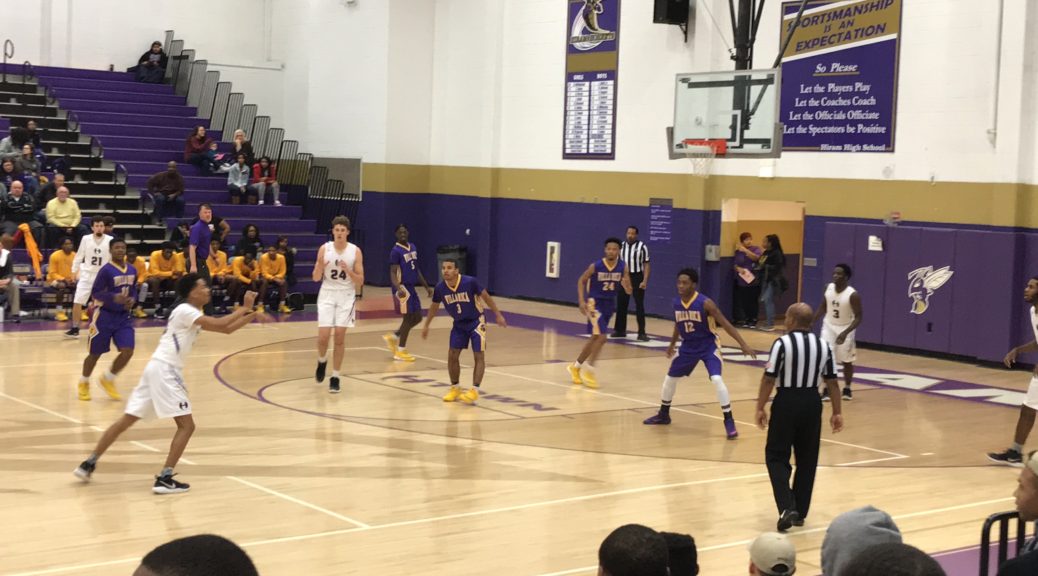 The last undefeated team in Class AAAAA is in action on the road.

With Region 7-AAAAA nearly all sewn up, lone Class AAAAA unbeaten No. 7 Villa Rica traveled to Hiram with their perfect 17-0 record in tow. After dropping in the Week 10 Class AAAAA poll, the Wildcats had an opportunity to pass the eye test and earn yet another road win. Instead, the Hornets (12-7, 6-3) stung Villa Rica (17-1, 10-1) and handed the Cardiac Cats their first flatline of the year, 63-57.

Hiram jumped out to an early 12-3 lead with 1:26 remaining in the first quarter. 6-foot-8 junior center Nathan Presnell hurt the smaller Wildcats inside. The football quaterback set the tone early with seven first quarter points including a put-back slam to get the crowd into it.

Villa Rica was able to compose themselves and clawed back into the game on an 8-0 run to close the quarter. Caleb Smith finished through contact for an And-1, as did JJ Franklin, but both missed their free throw attempts. Franklin was able to grab the carom off his miss and added a lay-up to effectively cap off a four-point play, cutting the Hiram lead to 12-11 after eight minutes.

Threes from Raphael Rogers and sophomore Arshard Crepsac expanded Hiram’s lead to 26-18 at the 3:37 mark of the second quarter. Just when it looked like the Hornets would pull away and push their lead into double digits, Villa Rica would answer back. Latrell Swanigan scored eight points in the second quarter and gave the Wildcats their fourth And-1 opportunity of the half, converting on the free throw to cut the lead to five at 26-21.

Hiram carried a 37-27 lead into the half, led by Presnell’s 11 points and Crepsac’s three threes. Darius Johnson scored eight of his nine points in the frame to give Coach Darius Hodge’s team some cushion.

Crepsac knocked down his fourth three-pointer of the game to give Hiram a 42-31 advantage at the 5:45 mark.

With the game slipping away, Coach Jason Robinson turned to senior guard Javonte Hart. After a quiet two-point first half with no field goals made, the 5-foot-11 playmaker began to go to work. Hart sparked an 8-0 run, fueled by his two threes and an assist.

Javonte Smart drills his second three of the quarter. He’s pouring it on. Hiram needs to slow it down and get it into @nathanpresnell5 @TGeorgianSports #sportalNews pic.twitter.com/L5RWcc6Qha

As Hart came to life, so did 6-foot-6 junior Micah Hodges. The Wildcat used his length on the offensive glass and scored five of his 11 points in the quarter.

The quarter ended on Hart’s 10th point of the stanza, scoring on a buzzer beater to bring the deficit to 48-44.

Wildcats might have just stolen momentum with this Javonte Hart hoop at the buzzer on a broken play. 10 points in the quarter for him.@TGeorgianSports #sportalNews pic.twitter.com/wqvoQGQbKY

It looked like momentum was finally swinging into Villa Rica’s corner, but the Wildcats were never able to seize a fourth quarter lead.

Jayden Henry finished on an And-1 off a put-back to grow the lead to seven points and then Presnell found Khalil Baker on a high-low feed to make it 53-44 with 5:57 to play.

Slowly, the Wildcats started to inch closer but were burning clock in doing so. Hart drove and dished to Franklin for a three to make it 56-52 at the 47.3 mark. After a Johnson five-second call, the Wildcats regained possession, but subsequently turned the ball back over on a travel.

With Hiram leading 59-55 with 17.8 seconds remaining, the Hornets threw the ball away on the inbound and Hart came away with the steal and was sent to the foul line. Hart split the free throws and Crepsac was fouled and hit two free throws to seal Villa Rica’s fate, the lefty going 6-of-6 from the line for the game, 4-of-4 in the fourth quarter and finishing with a game-high 18 points.

I was expecting a very competitive game and that’s exactly what I got. I think this week’s Spielin’ & Dealin’ hit the nail on the head with Villa Rica, so there’s no need to beat a dead horse. Javonte Hart was impressive and nearly willed his team to victory, finishing with 15 points, 6 rebounds, 6 assists, 3 steals and 2 blocks. He made winning plays and took advantage of Hiram’s smaller/less physical guards. One thing Villa Rica has going for them, is that they are very balanced, seeing four players crack double figures. At the same time, I’m not sure they have a true “go-to guy” that they can put the ball in his hands and he can get them a bucket whenever they need it. Hart was the closest thing to that tonight, but outside of Region 7, the competition is much different and much tougher. No. 1 Buford was in the house scouting – it’s imperative for anybody in the region to avoid the Wolves. Villa Rica doesn’t have much size outside of 6-foot-6 Micah Hodges, who showed flashes in the paint. Wings Latrell Swanigan and JJ Franklin hit two threes apiece.

Nathan Presnell should be on college programs’ radars. The 6-foot-8 junior averages 15 points and 9.4 rebounds per game. He is the quarterback of the football team. He is a good athlete with nice footwork in the low post. If he focused all his time into basketball, he could be a guy that receives D-I interest. He has a little current Georgia Tech Yellow Jacket and former South Forsyth star Evan Cole in his game, but he’s not as refined. He was comfortable taking 15-footers, although his shot was flat tonight. He was active on defense, not just blocking shots but getting deflections and saving loose balls. In a state that’s often been starved for true size in the post, Presnell could be an option in 2019. Sophomore Arshard Crepsac caught my eye as well. The sophomore is 6-foot tall and possesses a pretty lefty stroke that was on point. He showed his mettle going 4-of-4 from the line late in the fourth quarter as well. He has some smooth qualities but will have to be able to get to the hole more, as on Thursday, all his points came from beyond the arc or the foul line. Khalil Baker hurt the smaller Villa Rica frontline at times too. He’s not as polished as Presnell in the post and didn’t look like much of a threat when on the baseline from 10-15 feet, but Baker worked hard on the glass and had a nice left-handed hook on a duck-in seal off a high-low. Baker is a guy who’s not afraid to mix it up in the paint and can scratch out some good minutes.