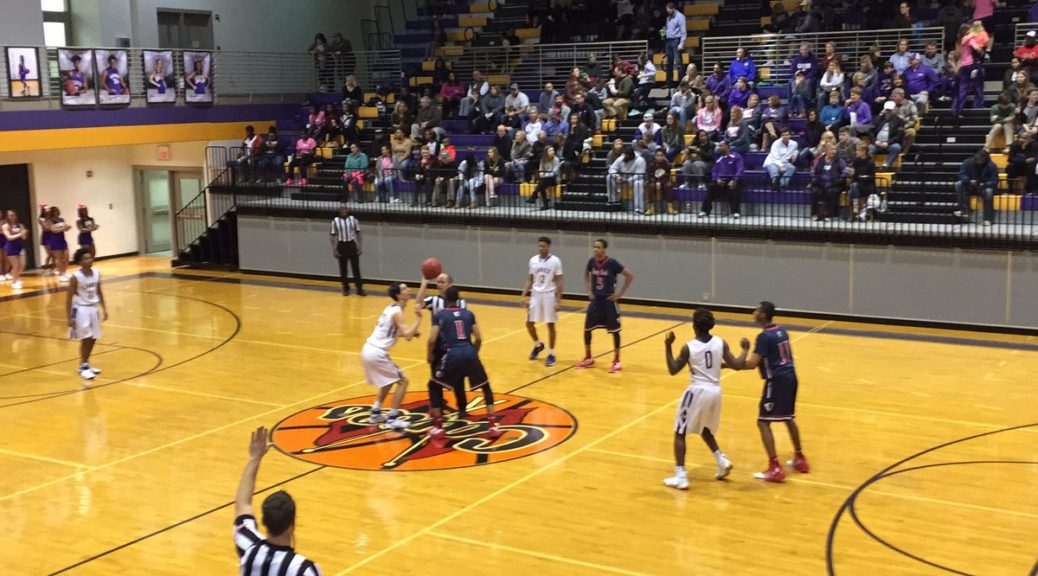 The Patriots opened the game with one defensive mission in mind: stop Jaylon Pugh. The left-handed junior guard poured in 23 points in an 86-80 loss against Sandy Creek back on Jan. 10. KJ Wilkins and others switched off face-guarding Pugh and held him to three points in the first quarter.

Sandy Creek took an 11-8 lead off a Jarred Godfrey steal and assist to Eric Williams and led 19-14 after one quarter.

Chris Porter came off the bench and sank two threes in the first half to help Sandy Creek grab a 26-19 lead at the 5:59 mark, but Cartersville began to chip away thanks to heavy Patriot foul trouble. The Hurricanes got into the double bonus with 5:54 left and surged ahead, taking 40-33 advantage into the half after a 21-7 run. Pugh keyed the attack, scoring 11 of his game-high 26 in the frame including back-to-back threes late.

In the third quarter, Cartersville’s onslaught continued, as did the foul calls on Sandy Creek. Just 2 minutes and 6 seconds into the second half, the Patriots already saw a 5-to-1 foul discrepancy. Forward Isaac Gridley started to find baskets around the rim as Sandy Creek hesitated to body up the post. He scored nine of his 15 points in the third quarter while TJ Horton sliced and diced the Patriot defense.

Horton, one of Cartersville’s many football players on the roster, netted nine of his 20 points in the quarter, a majority of them coming from downhill charges to the rim while breaking Sandy Creek’s press.

As the Hurricanes were searching for the knockout punch, Wilkins played rope-a-dope. The senior guard scored 10 of Sandy Creek’s 19 points in the period as the Patriots entered the fourth quarter trailing 62-52.

Down 67-54 with 6:48 left in regulation, Sandy Creek’s press finally cracked Cartersville. Wilkins and 6-foot-7 senior Evan Jester fueled the comeback. Wilkins scored 12 of his team-high 24 points in the quarter while Jester added 11 of his 22.

Sandy Creek sparked an 8-0 run capped by a Jester slam dunk, but the questionable officiating bit the Patriots again. A referee came screaming into the play to T-up Jester for “hanging” on the rim, resulting in Pugh sinking two free throws to push the lead back to seven at 69-62 at the 6:05 mark.

Fun finish in store, especially with this guy having a whistle. pic.twitter.com/LymvitcGmh

The tide was stemmed momentarily, but the Patriots kept pushing on. Cartersville clung onto an 80-78 lead with 57.8 seconds left after the Patriots closed in on a Williams put-back. Jester came away with a steal and lay-in to knot the game at 80 and the Patriots forced another turnover to take over possession with 49.8 seconds remaining; Jester pleading to Coach Anthony McKissic to hold for one shot after Sandy Creek called timeout.

The Patriots attempted to hold for one shot but lost possession, handing the ball back to Cartersville and sending JKobe Orr to the line with 5.3 seconds to play after a loose ball foul.

Orr missed both free throws and Kameron Miller’s half court heave was off target, sending the game to overtime.

In overtime, Wilkins began to cramp less than two minutes in. Miller fouled out, one of three Patriots to do so, with 1:57 left. Pugh pushed the lead to 89-86 at the 1:30 mark. Jester got a bucket and a foul but missed the free throw with 29.9 seconds remaining and Cartersville up 90-88. Pugh deflected a late three-point attempt and Trase Fezzia sank three free throws to ice the game, Cartersville going 27-of-42 from the line while Sandy Creek shot 19-of-27.

It sucks for the players, but the story of this game was the officiating. Sandy Creek didn’t get many calls throughout the game but when the technical foul was assessed to Evan Jester, it was pretty much the last straw and from that point on, you knew it would take a miracle for Sandy Creek to pull this one out. Aside from the abhorrent officiating, Cartersville’s tough-nosed guards did what they had to do. Jaylon Pugh cemented himself as a real deal guard and one of the best in North Georgia. He sank three three-pointers on the night and his lefty touch was deadly from all over the floor. He played closer in overtime with six points. TJ Horton played a whale of a game, especially in the third quarter. He thrived in the open court and made good decisions with the ball. Cartersville’s physical guards gave Sandy Creek some fits. Trase Fezzia was an emotional leader on the floor and his free throws late were huge. Isaac Gridley balanced the Hurricanes offense with a great spark in the third quarter after scoring just two points in the first half. Perignon Dyer had seven points at the half but was kept in check in the second half. With all their key pieces except for Fezzia set to return next year, Cartersville will be a stingy competitor in Class AAAA for at least another year, especially at home.

Sandy Creek was up against it tonight but hats off to them for even forcing overtime. Evan Jester was quiet in the first half with eight points and one rebound but turned it on in a big way in the fourth quarter. Eric Williams rebounded at a high clip and gave the Patriots some much needed second chance buckets. KJ Wilkins was phenomenal in the second half, hitting threes and burring mid-range jumpers en route to netting 22 of his 24 points after halftime. It’s a shame that he cramped up in overtime. He did not score in the extra period. Sandy Creek’s quality depth was definitely tested tonight. Chris Porter shot very well in the first half and little man Kameron Miller is a bundle of energy. The 5-foot-6 guard is an aggressive on-ball defender but he even flashed in a major way with his creativity with the ball, constantly getting into the lane and hanging in the air to find open perimeter shooters.