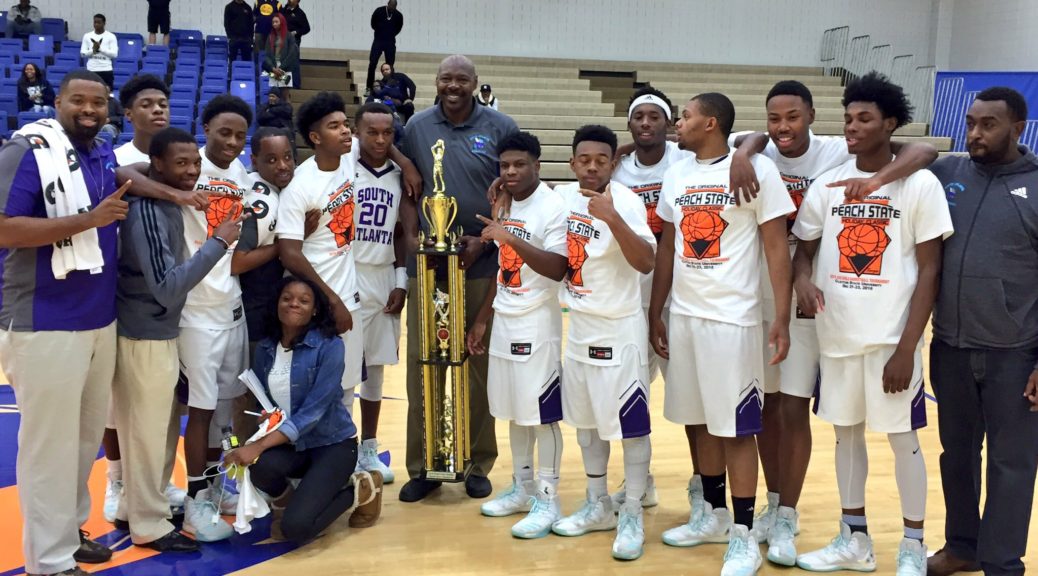 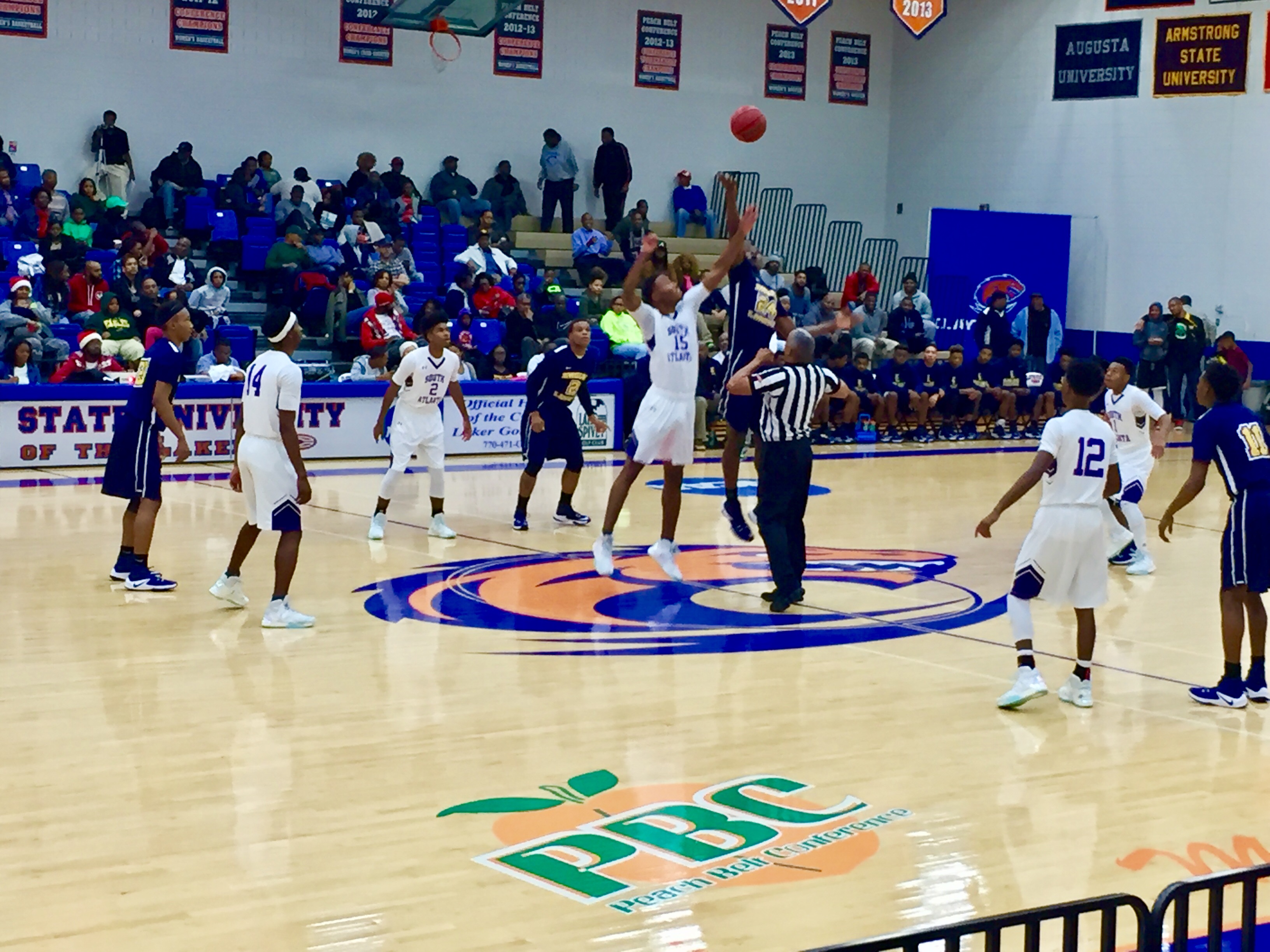 The finals of the Peach State Classic Championship featured Class AA No. 1 South Atlanta (12-1) and Class AAAAA No. 2 Eagle’s Landing (8-2). Both teams fought their way to the title game by knocking off ranked teams throughout their path.

South Atlanta opened up a quick 8-2 lead behind two Devonta Pullins threes and raced out to a 20-10 lead after one. The Hornets used an active defense and 10 of Pullins’ 13 points on the night to get off on the right foot.

A reason for the Eagles’ slow start was that 6-foot-8 North Carolina A&T-commit Mohammed Abubukar didn’t touch the ball in the opening eight minutes. In the second quarter Coach Elliott Montgomery and the Eagles made it a point to get him the ball. On the first possession of the quarter, Abubukar earned a trip to the line and sank both free throws.

The inside-outside duo of Abubukar and Brandon Thomas helped Eagle’s Landing weather South Atlanta’s early scoring storm. Thomas drilled a three to make it 28-19 at the three minute mark and with 1:42 left it was 30-21.

Right before the half, the Eagles got the ball to Abubukar again and he was able to convert to make it 32-24 with the Hornets still on top.

South Atlanta stepped on the gas to begin the third quarter, using a 7-0 spurt keyed by Pullins’ third triple of the game and Tyler Thornton inside to regain a commanding 39-24 lead.

Jalen Stegall hits Devonta Pullins for his third 3 of the game to open the 3Q. pic.twitter.com/atiYkQVq1V

With the game starting to slip away Abubukar sparked the Eagles, powering a 9-0 run highlighted by the big man collecting a steal and going coast-to-coast for a tough lay-in. Thomas drained another three to make it 39-33 with 2:27 left in the third.

Abubukar drove for a dunk and then completed an And-1 to cut the lead to five, but the Hornets ran off the final 50 seconds of the clock and received a Dondre Barnes layup to head into the fourth up 45-38.

Hornets run down the final 50 seconds and get a late Dondre Barnes layup. pic.twitter.com/MK1o94VZ8e

The Eagles’ surge continued in the final quarter, using a 7-2 run to close the lead to 47-45 at the 6:21 mark when Tarrence Evans scored his first two points from the line. With Eagle’s Landing in finally striking distance, the Hornets responded and made sure it would be as close as the Eagles were able to claw within.

South Atlanta ripped off a 14-2 streak over the final six-plus minutes to seal the game. It began with Barnes nailing a three and Jalen Stegall adding a jumper. Thornton capped South Atlanta’s 12 unanswered points with a one-handed jam to put the exclamation point on the championship.

South Atlanta has to be considered the favorite in Class AA to win it all. In fact, in this topsy-turvy season with parity at an all-time high, out of all my current No. 1 ranked teams in the state I am most confident in the Hornets. Wins over North Clayton (60-56), Class AAAAA No. 4 Fayette County (69-57) and Class AAAAA No. 2 Eagle’s Landing are as good as it gets, especially in Class AA which has seen other top programs struggle against tough competition out of the higher classifications. The majority of the Hornets have been playing together for years with a strong cohesion and a pedigree of winning which seems like it’s ready to come to fruition with a state championship. Devonta Pullins got South Atlanta off to a hot start with his three-point stroke, but it was far from a one-man show. Jalen Stegall and Dondre Barnes added 9 points apiece while Tyler Thornton was named Tournament MVP after posting 20 points, 12 rebounds and 4 blocks. The 6-foot-8 unsigned lefty power forward should be on some schools’ radar. Thornton is comfortable facing up and has a nice turnaround jumper out of the low block. His motor is steady and he is active on the glass and blocking shots. He will be a nice late addition for whatever program sees him as a fit.

Eagle’s Landing’s slow start was too much to overcome. Not getting the ball to Mohammed Abubukar at all in the first quarter was a mistake. The big man nearly carried them all the way back as he posted 15 points. Mo likes to put the ball on the floor and create from the high post, using a multitude of spins to get free in the lane. He needs to make sure he doesn’t get out of control when trying to attack. I would have liked to see him get more paint touches on the low block to see what he can do there instead of relying on him to create everything starting from 15-feet out. Brandon Thomas knocked down four threes, one in each quarter. He’s a sweet shooter when he’s open but he needs to be able to make more happen off the bounce and create his own shot. Christopher Hood added on 10 points and rebounded the ball well. Tarrence Evans was too quiet with just two points on the night. He is usually a strong option on offense. Zane Walker was a tough rebounder inside for the Eagles. The undersized forward brings a football mentality to the glass and I thought he gave Coach Montgomery some quality minutes.

One thought on “No. 1 South Atlanta stings No. 2 Eagle’s Landing with 14-2 close to capture Peach State Classic Championship”