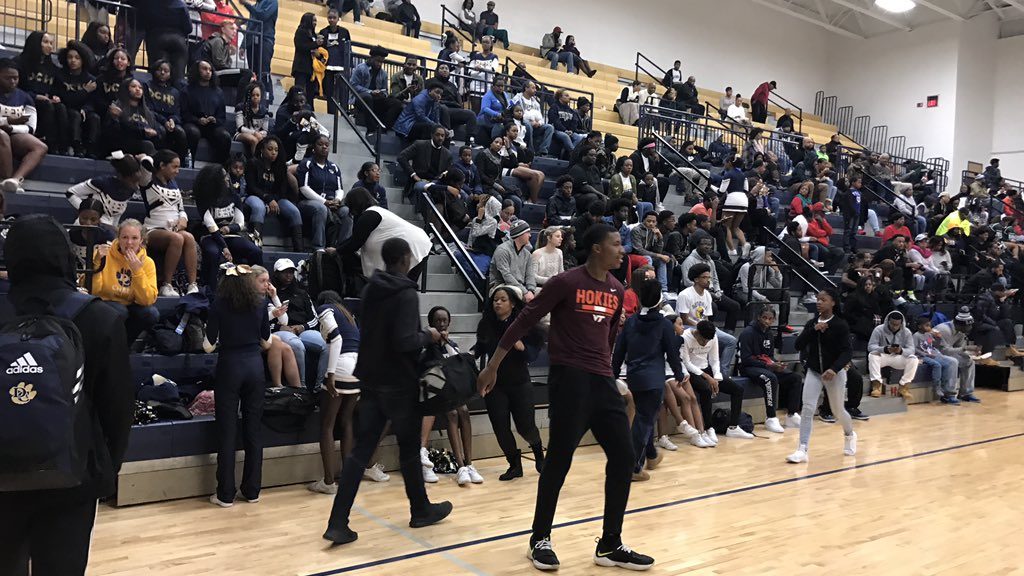 On occasion, a big loss can do more good for a team than harm. Such was the case back on November 28, 2017 when the defending Class AAAAAA state champion Langston Hughes Panthers took the Douglas County Tigers to the woodshed in a 78-43 win on their home court in Fairburn. Since then, Douglas County has reeled of 10 consecutive wins, including the championship of the Tucker Christmas Shootout. Tiger Head Coach Hollis Bethea watched his team grow over the past month and the rematch with the Panthers on their court would be a good barometer of how far the No. 4 ranked team in AAAAAA had come.

Panther Head Coach Rory Welsh knows how to prepare his team for a championship run and has the hardware to prove it from last year’s championship. His team has only lost once since that late November blowout win over the Tigers. The fact the contest was a Region 5 game made it an even juicer matchup. In an evening that would see the Panthers (12-3) best player, Virginia Tech-signee Landers Nolley get ejected for bumping an official, Douglas County (11-3) seized the moment to tie the game only to see the Panthers steady themselves for a late 9-0 run that sealed the 78-67 win. It gave the Panthers a two-game lead over the Tigers in the region standings.

Langston Hughes opened the night in a tight man-to-man, in your face defense, but the Tigers would respond quickly. Guard Rickey Clark hit a jumper for the opening basket and forward Ernest Randle had a big blocked shot to jump out to an 8-5 lead. However, the one-time, brief UGA-commit Nolley scored his first points on a deep NBA distance three-pointer for the tie and then took over, hitting three more threes before the end of the first with the Panthers up 19-14.  Nolley also had a crowd shaking dunk in the first quarter when he stole an inbound pass on a full court press. Coach Welsh utilizes Nolley in the front of the press, his wingspan creates challenges for the offensive team and he got several steals as the game progressed.

Not to be outdone, Tiger Jeremiah Smith got a steal himself and created excitement for the home crowd with a dunk on the other end to start the second quarter. Midway through the second, the Tigers were down by five but Langston Hughes slowly began to expand their lead. With the Tiger defense focusing on Nolley, Tyrel Morgan and Josh Butts contributed to a 17-8 Panther run to close out the half with them up 40-26.

At this point, Coach Bethea began to see answers to how much his team had grown. Down 14, the Tigers could have cashed this one in, but they came back scrappy. Malik Battle hit a three to serve notice this was not the same team that lost by 35.  The game changed suddenly at the 4-minute mark. The Panthers had their largest lead at 15 when Ernest Randle hit a three for Douglas County. After a foul, there were words exchanged between Nolley and a game official which seemed to irritate Nolley, who attempted to walk away but slightly bumped the official as he passed. He was immediately ejected and in the aftermath, Douglas County was awarded six free throws. In a cruel twist of fate, all the free shots were missed, each one to the delight of the visiting Langston Hughes crowd, which were making themselves heard.

After a star player exits, both sides need to recalibrate their game. For Douglas County, the Panther press was not as intimidating without Nolley in the front, so maneuvering the inbound pass was less difficult and that created easier scoring opportunities.  The Tigers jumped at the opportunity and went on to outscore the Panthers 23-11 in the next eight minutes to tie the game up at 62.  A moment that stood out in the Tiger resurgence was a real-man offensive rebound by Clark and the put- back, he seemed to just will himself to the rebound and score.

For the Panthers, the opposite was in effect, their offense revolved around Nolley scoring or distributing from a double team and Coach Welsh suddenly needed someone to step up.  It was almost as if the tie game issued Langston Hughes a wakeup call as Papa Samba led the Panthers on a 11-0 run that would put the game away. Clark finally broke the run for the Tigers with an offensive rebound and put-back, but the damage had been done.  Panther Armani Bolston would hit five consecutive free throws down the stretch for the final 78-67 margin.

Afterwards Coach Welsh was proud of the way his team responded to adversity. “We needed someone to step up and we have a bench full of selfless guys, the ejection caught us off guard, but I am proud of how we responded and how we put them away at the end. This team is full of players who sat and watched last year’s championship run and now they are getting their chance. They are taking advantage of it.” When asked where this year’s team is compared to last year’s team in early January, he said, “we are a better defensive team this year, these guys have been waiting a long time to prove themselves, and now they are.”

The Panthers will have to regroup quickly as they will be without Nolley for the next two games based on GHSA rules. It will provide them more opportunity to jell as a team and development supplemental scoring opportunities. In the long run, it may make them better, which should be a scary proposition for the teams in AAAAAA. Douglas County has improved from earlier in the year and the results prove that. Coach Bethea has stated that he believes they still haven’t played their best basketball yet. While winning the regular season region crown has probably passed, the next potential game between the two teams in the region tournament could be very interesting indeed.