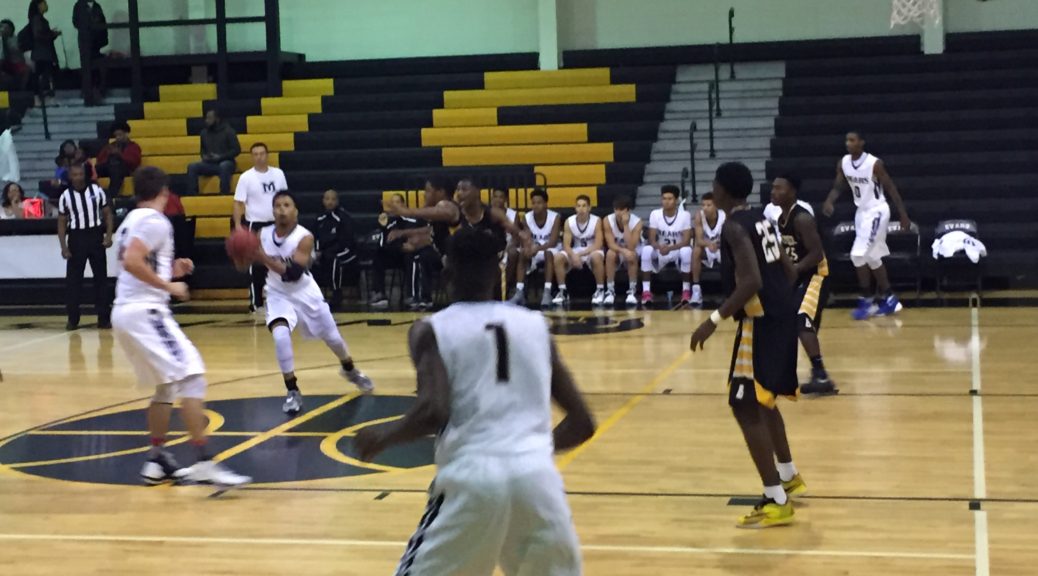 Coming off of a 76-43 win at Evans, the Mountain View Bears set sights on their next Augusta foe in the Evans Tip-Off Tournament, Class AA No. 7 Butler. The Bears led wire-to-wire, using five threes in the first quarter to gain separation and hold off a scrappy Bulldog bunch, 64-48.

Butler, without Christian Robinson and Head Coach Cervantes Boddy, who arrived at the 6:20 mark of the second quarter, fell behind early as Miles Long drained four threes and finished with 14 points in the frame. To make matters worse, the undersized Bulldogs saw strong man Will Lambert pick up two early fouls and head to the bench at the 3:09 mark, Butler already down 8-2.

Defense leads to offense. Spencer Rodgers cans a 3 off the Jalen Hayes assist.

The Bears took a 22-6 lead into the second quarter but the Bulldogs found life once Boddy arrived to the sidelines. Butler’s quick guards ramped up the press and started to cause havoc, Mardrez McBride leading the way with five points in the frame. Butler closed to within 29-25 at the 2:34 mark riding a 19-7 run but Spencer Rodgers helped Mountain View regain control scoring seven of his 14 points in the second quarter as the Bears entered the half up 35-28.

Butler continued to hang around in the third quarter, surviving a Rodgers steal and jam, countering with a Jerry Leverette three ball.

Spencer Rodgers gets the steal & the flush but Jerry Leverette answers with a 3. pic.twitter.com/bXNlg23pr5

At the 4:25 mark of the third quarter, Butler closed the gap to 41-39 on a McBride floater, but it would be as close as the ‘Dogs would get.

Mountain View carried a 47-42 advantage into the fourth quarter and proceeded to finally land the knockout punch. The Bears outscored the tiring Bulldogs 17-6 in the final quarter as Uchenna Nwagbara beat away at the smaller Butler frontline. Nwagbara, only pushing 6-foot-4ish on a good day, scored 10 of his 12 points in the final eight minutes. He came away with two back-to-back blocks (five on the game) which led to buckets for the Bears.

Butler’s DeAndre Barton scored 11 points in the game but was held to just two in the fourth quarter as the Bulldogs couldn’t keep pace with the Bears.

The absence of Cervantes Boddy to begin the game and Christian Robinson being out for the entire game really hurt Butler. Robinson scored 16 points in their season opener and is a tenacious defender that was sorely missed. I’m not sure why Boddy was late, but once he arrived the Bulldogs picked up their intensity tenfold and really started to push Mountain View. A sour first quarter and fourth quarter bookended a game in which Butler never could get over the hump. They will be a tough team in Class AA. With Robinson playing, he is another solid guard to help out. Butler’s press didn’t force too many turnovers but it sped the game up. Will Lambert’s foul trouble kept Butler’s lone big guy from ever establishing himself (scoreless). Lefty Mardrez McBride has some wiggle to him and played well.

Miles Long has been great to start the year for Mountain View and he had his flamethrower on him early with four first quarter triples. The cohesion of the group was apparent as they all fed off each other. Uchenna Nwagbara was great down the stretch on both ends of the floor but the unsung hero was Kevin Kayongo. He finished with three points, all in the fourth, and collected 10 rebounds, two assists and one block.