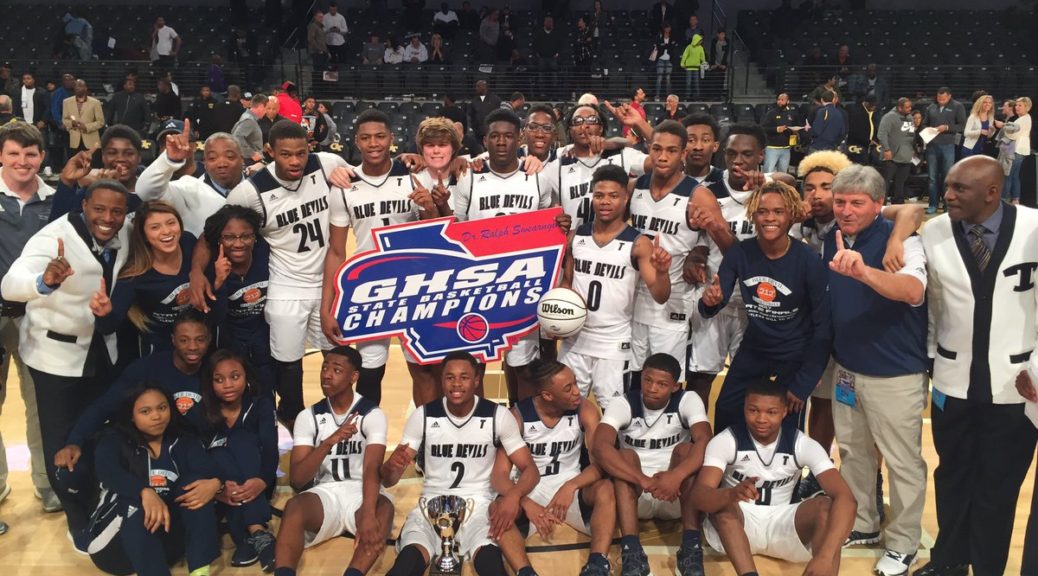 In a year where “super teams” were en vogue, little old No. 6 Tift County (29-2) decided to spoil the party and not only shock the landscape of Georgia high school basketball, but the entire nation as the Blue Devils emerged out of the “Group of Death” to escape a frantic rally from No. 4 Norcross, 55-52.

Tift County bucked the odds and quietly loomed in South Georgia as the 2014 state champions patiently waited for their shot at the big boys while smashing its way through Region 1. When they arrived at McCamish Pavilion, it was only fitting that the 3-hour trip would end in the Blue Devils completing the state’s greatest and most improbable state championship run in GHSA history.

Tift opened the game like they did against so many other victims, jumping out to a quick 4-0 lead but Norcross quickly eased ahead and gained a 13-9 lead after one. Norcross grabbed its largest lead of the game at the 7:21 mark up 18-9 after Dalvin White netted his second three of the game. The Blue Devils looked to be in control as Tift County’s 6-foot-6 Virginia Tech-signee PJ Horne found it difficult to bully his way around the basket like he did against Newton (25 points) and McEachern (17 points) in the Elite Eight and Final Four. After a first possession offensive rebound and putback, Horne saw his halftime line read: 1-7 FG, 0-3 3PT, 3 rebounds, 3 turnover and 2 points.

With Tift County’s workhorse neutralized by 6-foot-9 Louisville-signee Lance Thomas and 6-foot-8 Georgia-signee Rayshaun Hammonds, the Blue Devil guards lifted Coach Eric Holland’s team. Football standout junior Rashod Bateman scored 10 points in the first half, hitting two threes to bring Tift County to within 21-19 at the half, Tift mucking the game up exactly how they needed to to beat a high-octane team like Norcross. Tift wore their workman blue collar warm-ups and stripped them off to shirts with the phrase “no buckets” across their backs pregame, and were able to back up their tough-nosed defense once the ball tipped.

Both teams shot 33% at the half, not what the casual fan was expecting. But nobody expected Tift to be here in the first place. In the third quarter, Horne slammed home a dunk – the final points of his high school career as he finished 2-of-12 from the field with only 4 points and 5 rebounds. At the 1:37 mark Norcross’ Hammonds picked up his fourth foul on a charge and was sent to the bench. With Hammonds out, Bateman quickly drained another three, finishing with four on the night, taking a 32-24 lead in the process.  Norcross closed however and entered the fourth quarter trailing 32-29.

While Hammonds sat on the bench, Thomas started to come to life. He knocked down a turnaround jumper off a post catch and then added a baseline shot to give Norcross a short-lived 33-32 lead with 5:47 to play.  The Blue Devils quickly ran off eight straight points to go ahead 40-33 and then fouled Hammonds out of the game with the score the same with 3:22 remaining; Hammonds finishing his career with 8 points on 2-of-11 shooting and 8 rebounds.

Possessions got shorter and shorter as Tift continued to grind away at Norcross to go ahead 42-33 before Thomas hit a three. Micah Johnson, going to Alabama State, would not let his Tift County Blue Devils squander a lead, even though it got hectic.

Norcross slowly inched closer and closer as Tift tried to pile on the dirt on the Blue Devils’ grave, but White and Jordan Goldwire along with Thomas gave Norcross a pulse. From down 49-40 with 1:18 left to play, the Blue Devils trimmed the lead to 49-44 with 51.9 left, then to 51-47 with 42.7 remaining and down to 53-52 with just 10 seconds remaining as JoJo Toppin completed an And-1 dunk to send the crowd into a frenzy.

Just when it looked like Cinderella’s glass slipper cracked or the carriage was on the verge of turning into a pumpkin, Johnson continued to supply the dagger as Norcross would foul. Tift County shot 24-of-26 from the foul line – 21-of-22 in the fourth quarter – with Johnson scoring a game-high 24 points going 16-of-18 at the stripe and scoring 17 points in the frame. At just 6-foot, Johnson also collected 9 rebounds and 4 assists, with just one turnover. Bateman ended his night with 18 points as Tift’s guards got the better of Norcross’.

Dalvin White led Norcross with 15 points while Lance Thomas had 13 points but only 4 rebounds as the smaller Tift County Blue Devils outrebounded Norcross 31-28 and held the bigger Devils to 16 points in the paint.

PJ Horne spoke with me after the game: 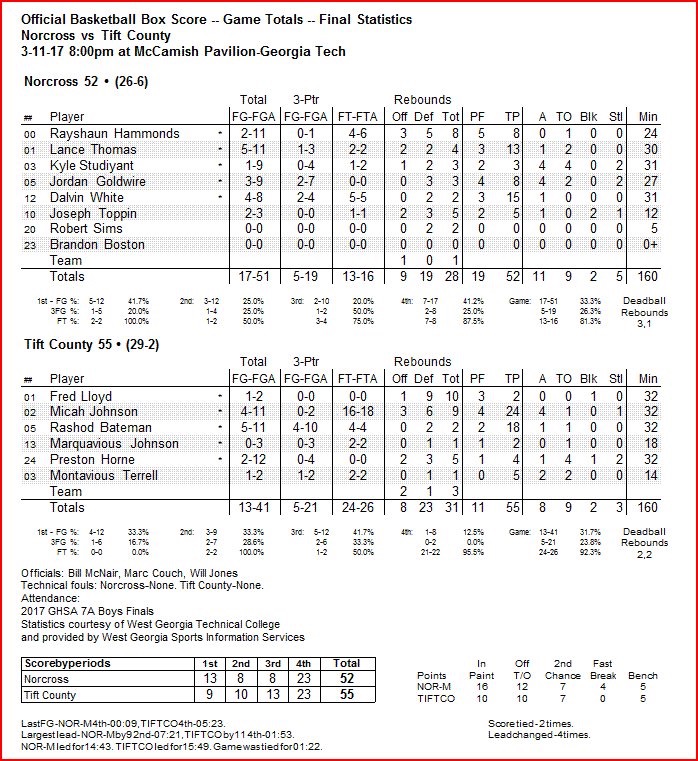