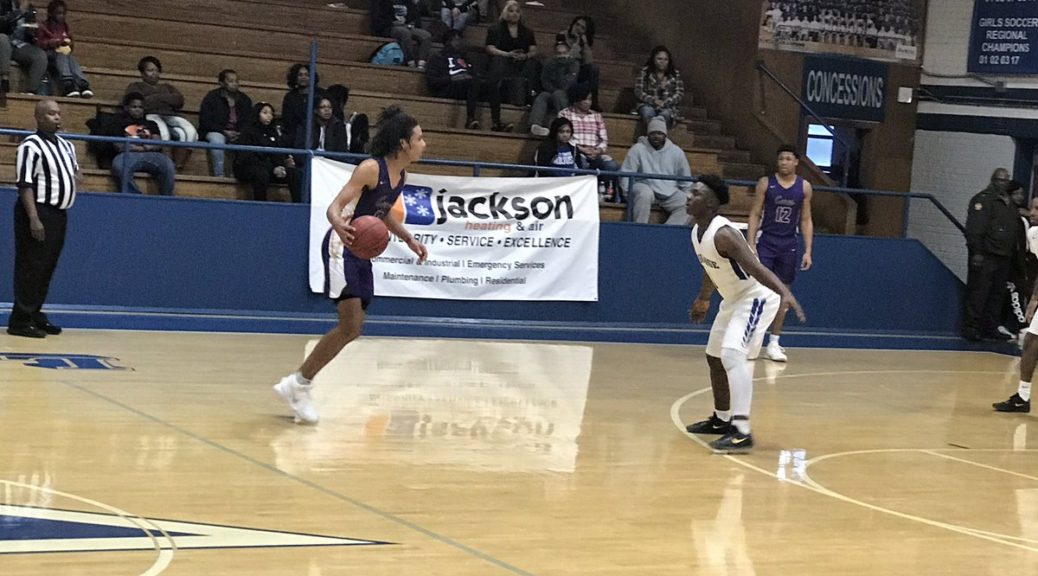 January 6, 2018 (LaGrange, GA): Region 5-AAAA is one of the most competitive regions in the state, two teams are in the current Top 10, with No. 3 Sandy Creek and No. 9 Cartersville while three others are very good; Cedartown, Troup County and LaGrange. It is also one of the most geographically diverse as well, as there are some serious road trips that accompany region play.  The Cartersville Hurricanes had one of the road adventures Saturday afternoon as they drove over 200 miles roundtrip to LaGrange to face the Grangers in their historic gym.

LaGrange (10-6) had gotten off to a slow start to the season, but Head Coach Mark Veal guided them to a five-game winning streak as they prepared to enter the trenches of region play. Cartersville (10-2) is led by senior, Furman-signee Jaylon Pugh and Head Coach Mike Tobin is putting together the pieces to make a serious run for the region crown. The Hurricanes defeated Central-Carrollton on Friday night, which meant his team would spend six of the next 28 hours on yellow buses. LaGrange lost on the road Friday night at Cedartown as well, so both teams came into the game a bit weary from the road. While the extra travel may have sapped some of their energy early, Cartersville overcame a 13-point fourth quarter deficit to get a huge road win and take an early lead in the region.

The Grangers knew that to stop Cartersville, you had to stop Pugh, so they played a box-and-one defense on him and tried to prevent him from getting the ball in open space, they were making things busy for him with relentless pressure. Their strategy was successful, as they held him scoreless in the first half. LaGrange jumped out to a 14-11 lead to end the first quarter, highlighted by a Bo Russell three and solid defense. Perignon Dyer picked up the scoring slack for the Hurricanes, he scored two three-pointers to keep things close.

Russell got help from his supporting cast in the second quarter, Daz Williams and Jordan Ogletree led a balanced attack for LaGrange while Cartersville got two more threes from Dyer to keep it at 34-29 at halftime.

When Russell hit a three-pointer to start the third quarter, it appeared that the Grangers were prepared to deliver the knockout blow and with 3:45 remaining in the third, Russell hit a smooth runner in the lane to put them up 16 points, but the Hurricanes were pesky and would not go away. Senior TJ Horton took it on himself to keep the game close and with 1:38 remaining, he scored on a nice drive to the basket and made a free throw to cut the lead to nine.

The anatomy of a comeback is always interesting to watch and then replay in your mind. In a game that LaGrange had controlled almost throughout, had led once by 16 and now led by nine with a quarter remaining, Earley Sanders committed an offensive foul that seemed to give the Hurricanes renewed energy.  Pugh broke free of the defense set to stop him and scored two baskets early and when Horton hit a three with 6:32 remaining, the Hurricanes were now only down by six. LaGrange called a timeout so Coach Veal could summon renewed energy that had faded in the start of the fourth, but Cartersville had already stolen the momentum.

After Russell hit one of two free throws, the Grangers had a three point lead and tried to ice the game by spreading out to a four corner set at the 2:50 mark. That strategy backfired as the Hurricanes would close the game out with a 12-5 run down the stretch, led by Horton and Pugh going to the free throw line repeatedly, they would go a combined 8-of-11 from the charity stripe as the clock joined the Hurricanes as the Grangers’ biggest enemy.  In the end, the Hurricanes outscored the Grangers 22-9 in the fourth quarter with Pugh contributing 11 of those down the stretch for the 64-60 final.

For the Hurricanes, it was quick turnaround, after a five-minute postgame meeting with Coach Tobin, the team grabbed seven boxes of pizza and scampered back to the buses for the two-hour ride home. Coach Tobin offered, “We had a tough stretch with these two games back-to-back on the road and their defense picked us apart early, but we played our game and caught some momentum in the fourth quarter. This was a huge road, region win for us. TJ picked us up tonight and carried us for that victory. We have another tough game on Tuesday as we get Sandy Creek, but it will be at home. We are looking forward to that.”

It will be a night that LaGrange will look back on as a missed opportunity. It is tough to lose a lead at home, especially when your star player, Russell, scores 27 points. They will try to get back on the winning page on Tuesday against their county rival Troup County, which is just ahead of them in fourth-place in the region. After the loss to Cartersville, it just became a must win for them.