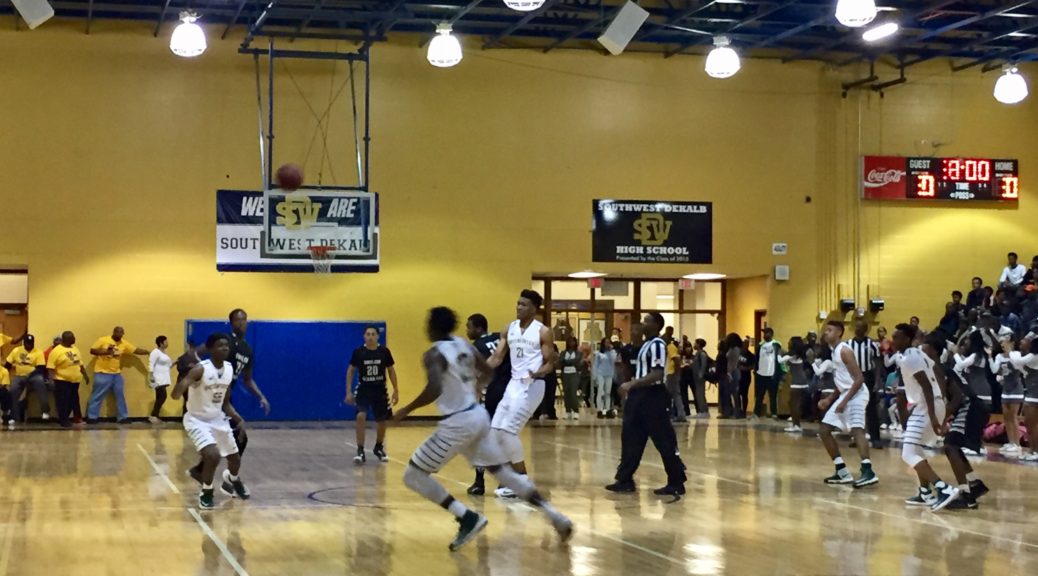 Opening day of the 2016-17 season saw Southwest DeKalb Showdown III host Class A-Private No. 1 Greenforest vs. Class AAAAAAA No. 7 Shiloh, annually two of the state’s most stingiest defenses. Greenforest’s offense would be put to the test without leading scorer Justin Forrest available to play.

The Generals rushed out to an early 7-2 lead behind Brian Coffey and Greg James but Greenforest’s bench instantly made an impact and helped the Eagles close the quarter up 8-7.

Greg James gets @ShilohAthletics on the board with a 3 pic.twitter.com/bsklawvka7

Abayomi Iyiola and Mohammed Abdulsalem combined for six quick points to steer momentum back into Greenforest’s corner in a low scoring defensive struggle.

In the second quarter, Greenforest got the slight separation it needed when Michael Evans drained a three and Terrell Sanders followed by banking in a deep ball, giving the Eagles a 16-9 edge. With Forrest out, Coach Larry Thompson had other guards step up. Evans scored all five of his points in the first half while Dougherty move-in David Quimby made his presence known right away, dropping in 13 points on the night.

At the half Shiloh trailed 26-18. Greg James kept the Generals afloat with seven of his game-high 22 points in the second quarter. He and Coffey combined for 17 of the team’s 18 points at the half.

In the third, Iyiola kept Greenforest ahead and had the Shiloh defense scratching its head as the lanky 6-foot-9 forward poured in mid-range jumpers.

Quimby made it 35-18 at the 4:20 mark of the third when Jandan Duggan found him on a baseline alley-oop. The Generals however would answer with a mini 9-4 spurt keyed by a James three at the buzzer, his fourth of five triples.

James opened the fourth with another three to bring Shiloh within 39-30. The Eagles and Generals continued to trade stops and buckets, while MTSU-signee TJ Massenburg began to make a difference. After a quiet first three quarters, the long-armed big man rose up for a thunderous putback dunk to make it 41-33 with 4:45 remaining and the pro-Shiloh crowd in full throat. But like they did throughout the entire game, Greenforest would thwart any type of Shiloh momentum, pushing the lead back to a 10-point deficit at 45-35 with three minutes left.

Shiloh would cut the lead back down to 47-40 with 56.4 seconds remaining, but would have to start playing the foul game where Duggan beat them from the line, hitting all four attempts and scoring six of his nine points in the final quarter.

Greenforest is still the team to beat in Georgia. Their Dec. 3 matchup with Wheeler should be an instant classic and the winner will get bragging rights as the state’s true best. Even without Justin Forrest, the Eagles didn’t skip a beat. The addition of David Quimby will loom large throughout the year as a guard that can get his own shot and take some of the burden off Forrest once he returns. He, Jandan Duggan and Michael Evans combined for 27 important points tonight. Inserting Abayomi Iyiola into the game off the bench really helped Greenforest take off. When he’s hitting jumpers consistently, the Eagles are difficult to beat. He had a team-high 14 points and 12 rebounds. Ikey Obiagu had an emphatic loud block in the opening seconds of the game against Brian Coffey but he was quiet outside of that, even though he did collect four blocks and seven rebounds. He went 1-for-8 from the foul line and finished with five points. His offensive game is still a work in progress and his explosiveness and ability to log major minutes night-in and night-out is still in question. He had a hard time gathering himself on fastbreaks when the Greenforest guards tried to lob him alley-oops. If the offense and mobility never fully comes around, he can still hang his hat on his rim protecting which will prove to be extremely valuable at all levels.

Only three players scored for Shiloh tonight – the three D-I players. Brian Coffey looked quick with the ball and could get into the paint but when facing 6-foot-8 through 7-footers, there wasn’t much he could do in the paint. The same goes for everyone that plays Greenforest, so Coffey had to rely on the mid-range. Greg James was great for Shiloh, hitting five threes. If he wasn’t on, it is scary to think what the score could have been. The VMI decommit also chipped in 10 rebounds. He is definitely someone that LM schools should look at to provide a boost on the perimeter; after last night’s showing it’s hard to fathom why no one has jumped in on him yet. TJ Massenburg battled valiantly but did have a hard time going at Ikey Obiagu, having his shot blocked a few times. It would have been nice to see him use his soft touch from beyond the arc to draw Greenforest’s bigs away from the basket to create driving lanes for Coffey and James, but I only remember him attempting one.