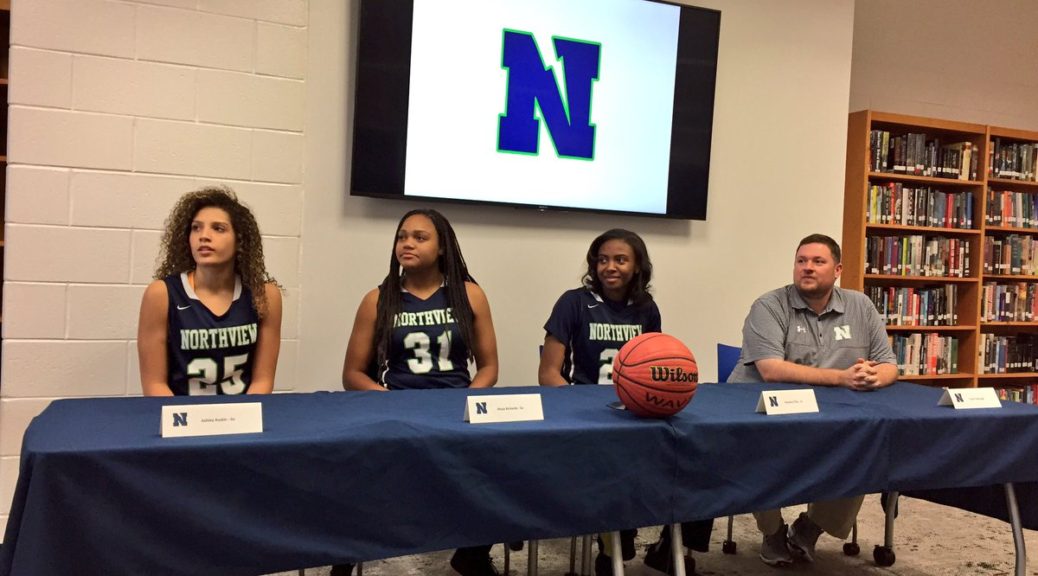 Lady @Cambridge_Hoops looking to establish some new rivalries in their new region. 4 starters back. pic.twitter.com/PIHu3jDpQL

Does winning a state championship in softball carry momentum over into basketball season: “Absolutely winning breeds winning. Audrey [Smith] was part of that softball team. We are cheering for all the teams at Cambridge and there has been some success in the Fall and are looking to keep moving forward in that direction.”

On playing in a difficult region: “I told them someone told me that we were picked to win the region this year so they are so psyched and hyped up, they really don’t know who’s on the other teams. They are just so excited.”

On freshman Sitra Newton: “I’m expecting great things out of her. She still has a lot of things she needs to build on, grown on, but she’s a leader already as a freshman and I’m excited to see her on the court and get in and help lead this team.”

No. 5 @WestlakeHoops is looking to build off last year's deep playoff run. pic.twitter.com/JV8B9ha12G

Is a young Westlake team ready to live up to expectations as Preseason No. 5: “I really think they are especially in their heart. In their heart they are ready. Sometimes that doesn’t always manifest on the floor but sometimes it does. Since they are so young, I will find out real soon. I do believe that they are. We had a real good summer.”

@CoachDomville has a good group that could sneak into the postseason. A lot of continuity. pic.twitter.com/g68J74MH2t

What did your team learn from last year’s state playoff berth: “I think the biggest thing was getting those extra practices. I don’t think a lot of people expected us to go to state, we ended that game on a 17-0 run. That was a North Forsyth team that was kind of a skeleton in our closet so to speak. To tell you, those Forsyth schools were always tough for Centennial to beat. And playing a team like Norcross at Norcross, for them to see that environment and again to set the expectations that this is where we are supposed to be.”

On Alayna Ford, Sienna Gore and Marissa Gore: “Alayna has really worked on her game over the offseason. She had a good summer on the AAU circuit and really expanded her game to be able to go inside and outside. Sienna is a little bit of a throwback in the sense that she doesn’t play AAU, she’s in the gym all of the time. Her and her sister are together literally all of the time. They are great kids, they work hard and they are fun to coach.”

Coach Kirk Call has won a ton of games at Parkview. He looks to recreate the success at @johnscreekhoops pic.twitter.com/rP6Iyogvbm

How to recreate the success he had at Parkview: “It’s very challenging. I’ll be the first to tell you we had a lot of great players at Parkview. The best thing about that group is they bought in. They played for each other. I’m a big proponent of that if you care more about the person next to you than yourself you’re going to be successful. Step 1 to getting that process done is understanding the fact that I’m not out here for myself, I’m out here for my teammates and as long as I’m focused on doing something for my teammate and making everyone else better, that comes back around and works for me when they are creating a play for me.”

What to expect from sophomore Croix Bethune: “I’m looking at her and [Gogo and Juju Maduka] as leaders for our younger kids and for the kids who had little experience last year. I’m hoping with some of the players we got coming up that we can take some of the pressure off her as well from last year, scoring-wise and sometimes ball handling-wise as well. Really for her, the plan is for her to lead by example.”

What did you learn your freshman year that you can use going forward: “Really working hard, but not going overboard and to save some of my energy. The seniors that just graduated, having them to help me last season and having these players to help me.”

On this year’s game plan: “Our game plan is to go out and play their basketball that I teach the girls every night from fundamental basics to executing. That’s basically our game plan.”

No. 10 @NHSMessenger has never won a Region championship. That might change this year. pic.twitter.com/Fqdu78XGes

Is the team ready to handle the pressure of being ranked No. 10 in the state: “One of the things I stress to them with all the accolades; it’s still just on paper. We haven’t played a game yet. Preseason rankings don’t count, they don’t get us anywhere so we need to make sure that we can rise to expectations that people are setting for us. I think we snuck up on people the last couple of years with the way we played but now we have to embrace the target. People are going to be coming after us night in and night out and we have to rise to that level each night.”

Ashlee Austin: “There’s a lot of new stuff: new region, new players but we are going to just keep playing our game and do what we can do.”

Shannon Titus: “We need to just have fun. I think when we are too hard on ourselves we make more mistakes and when we have fun we share the ball; we will be just fine and play our game.”

Maya Richards: “I think a lot of pressure, you can get wrapped up in the pressure so easily that when you’re actually playing, you just have to play basketball and not worry about your parents or school, you got to worry about playing the game and enjoy it.”

What changes in Year 2 after a successful freshman season:

Richards: “I think we’ve both improved from last year and we played AAU together so I think AAU has really helped us. AAU plus summer basketball, we’ve grown as people and players.”

On Shannon Titus’ role one the team and goal for her senior season:

Titus: “I think I just need to give it everything I have both offensively and defensively. I set a record [steals] but I can keep setting records and beat my own record. I guess I’m pretty hard on the younger players just to get them in track because they can goof off a little bit, just to help them and guide them on the right path.”