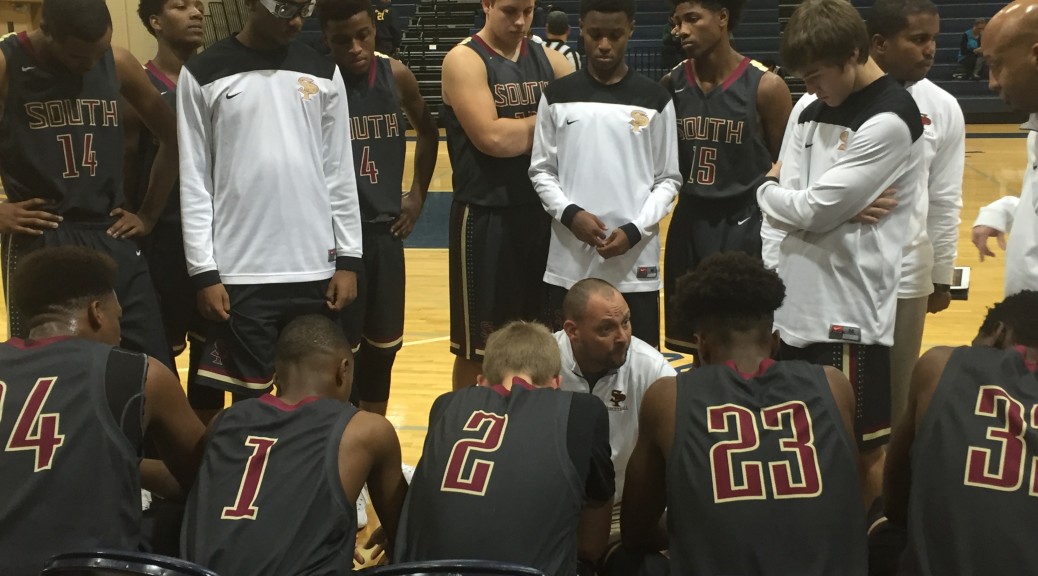 Game 1 of the SEBA Showcase at Pope High School pitted two programs with differing identities. South Paulding, coming off a disappointing loss to No. 4 Allatoona the night before, wanted to get back into their groove and run a free flowing offense. Blessed Trinity preferred to slow things up and use a methodical pace on offense and a grind-it-out style on defense.

To begin the game, it looked as if South Paulding’s athletic lineup paced by Kane Williams, was going to run roughshod through Blessed Trinity, taking a 12-0 lead behind a trapping press. The Titans didn’t score a basket until John Michael Bertrand, who scored a team-high 16 points, scored with 1:25 left in the opening period and netted all four of Blessed Trinity’s first quarter points which resulted in a 14-4 hole entering the second.

Things slowly began to change after the Titans shook off a sluggish first eight minutes. Blessed Trinity began getting to the basket and drawing fouls. The Titans got as close as seven points in the second quarter but still trailed 29-21 at the half after sinking 10-of-15 free throws.

Though they let their foot off the gas pedal, the Spartans still felt like they were in control, especially with the big first half of Williams. He finished with 13 points, seven rebounds, three assists and four steals in the opening 16.

Coach Patrick Hughes made the proper halftime adjustments for Blessed Trinity and much like they did in the second quarter, the Titans slowly crept closer and closer to South Paulding. Ja’Cori Wilson picked up his fourth foul with 6:33 to play in the third and the Spartans’ lead down to 31-29 after CJ Abrams completed a three-point play.

While the 6-foot-7 Wilson sat, the South Paulding lead continued to dwindle before Blessed Trinity took its first lead of the game, 35-33 with 3:45 left in the third quarter. The Titans outscored South Paulding 20-10 in the frame to take a 41-39 lead into the fourth, thanks to seven points off the bench from Abrams, who ended the night with 11.

Blessed Trinity extended the lead to their largest of the game at 43-39 less than a minute into the fourth. Suddenly sensing the game was in jeopardy, Coach Gil Davis’ Spartans began to respond, using its trapping defense to force turnovers. Wilson finally checked back in with 5:29 left and trailing 45-43. While Wilson struggled to find any rhythm, it was big man Anthony Brown who stepped up. Brown blew a couple bunnies in the first half, before Williams fed him for a game-changing slam with two minutes to play to give the Spartans a 51-47 lead.

With 26.3 seconds remaining, Blessed Trinity found itself with the ball down 52-49. But the Titans were unable to get a good look as DJ Jackson forced Jackson Svete into a huge turnover. Blessed Trinity had one last opportunity after a Spartan turnover, but were unable to convert on a three with 13.3 seconds left, handing to the ball back to South Paulding who would sink a pair of free throws to close out a 54-49 win and avoid blowing a big first quarter lead.

My Take: South Paulding came to play and looked hungry after a poor showing on Friday night, but after they took a 12-0 lead, it looked like the Spartans lost focus and didn’t take the Titans as serious as they should have. Blessed Trinity began wearing away at South Paulding by making them play long defensive possessions and be patient while the Titans sliced and diced their way to backdoor cuts and screens leading to layups. John Michael Bertrand played well for the Titans with 16 points. Kyle Swade hit some big shots and finished with 12, but it really was backup guard CJ Abrams’ big third quarter that got them back into the game.

South Paulding turned to Kane Williams late in the game and he was the difference maker, coming away with all the plays. His running mate Ja’Cori Wilson picked up too many silly fouls and left all the work on Williams’ plate. He along with Anthony Brown made sure to get the Spartans back in the win column. Brown struggled to finish inside at times, but the burly big man’s soft hands helped him take over down low on his way to 17 points and 13 rebounds. If Brown can be that effective inside with Williams and Wilson performing like they are capable of, the Spartans will be very dangerous throughout the season. Blessed Trinity’s style of play and discipline will keep them in every game they play this year. Class AAA is wide open, giving the Titans the chance to play spoiler for a lot of other teams come state tournament time.