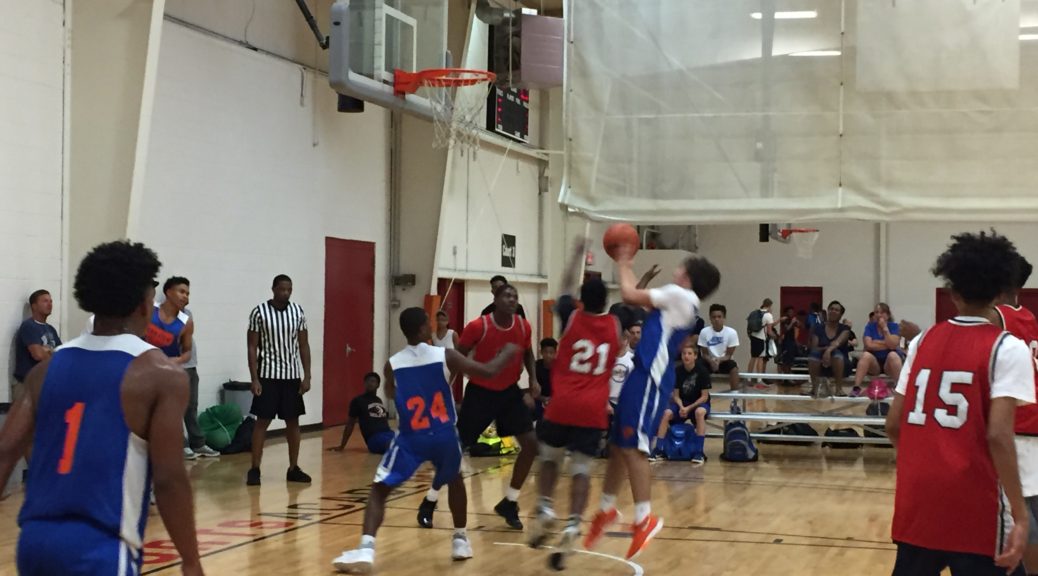 Up until the regular season starts, Suwanee Sports Academy is home of the High School Fall League spanning from Week 1 (Aug. 20) to Week 8 (Oct. 15). 16 varsity teams take to the court along with two AAU programs, creating a competitive atmosphere. A handful of teams are in early contention to crack the Top 10 in their respective classifications for the 2016-17 season, making the SSA Fall League an intriguing stop during the dog days of summer. 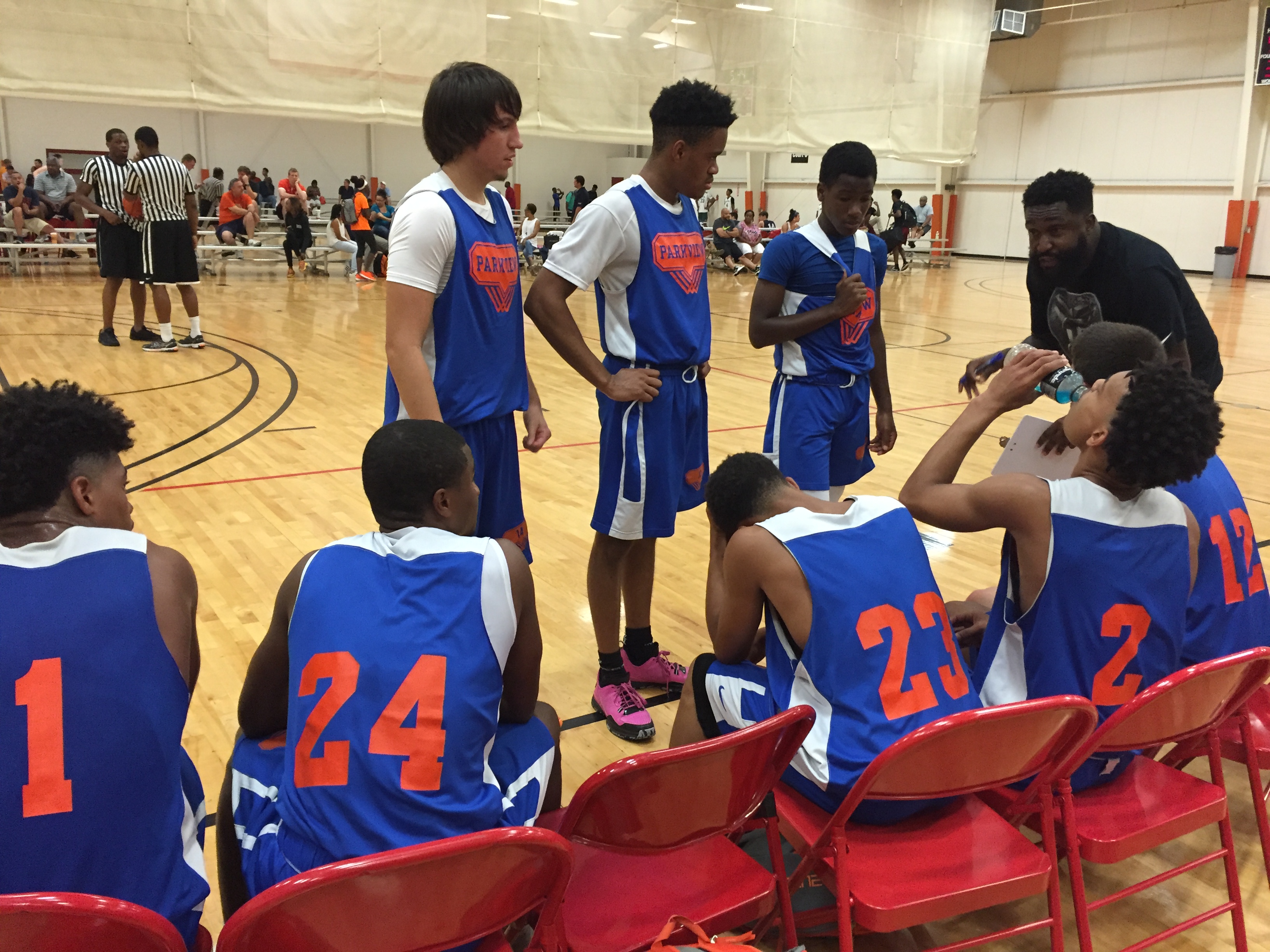 Two teams with high expectations that could really sneak up on the state met in Week 2. The Panthers were without 6-foot-7 sophomore Ahmir Langlais and 6-foot-5 freshman Toneari Lane who were both at North Florida Elite Camp where they picked up scholarship offers. Even without two of their brightest young talents, the Panthers still managed to lead coast-to-coast and knock off the Cougars.

Parkview entered the fourth quarter up 11 before Alexander’s Damion Howell began to hurt Parkview’s smaller interior, the beefy 6-foot-7 big man collecting six of his eight points in the quarter. The Cougars clawed to within four before Parkview leaned on last year’s leading scorer, junior Cam Chavers to carry them to the finish line. Chavers netted six of his team-high 14 points in the final frame. The Panthers’ backcourt harassed the Cougars into turnovers which led to easy hoops. (Jr.) Justin Spencer scored 13 points followed by (Jr.) Myles Joseph and (So.) Jamiel Wright scoring 11 apiece. As a team, Parkview knocked down nine threes, which should stretch defenses out to allow Langlais space to maneuver inside this upcoming season.

Alexander showed flashes of being a dangerous team in Class AAAAAA with their lineup of (Jr.) Grant Howard, (Sr.) Rod Rapley, (Sr.) Zeek Copeland and sophomore Cameron Armstrong surrounding senior Damion Howell inside. Howard provided the most consistent outside shooting, able to pull up off the dribble and drain from deep. He hit four three-pointers en route to a game-high 16 points. Rapley added nine points and Howell, eight. The Cougars’ aggressive guard play will be at its best when configured into Coach Jason Slate’s system. 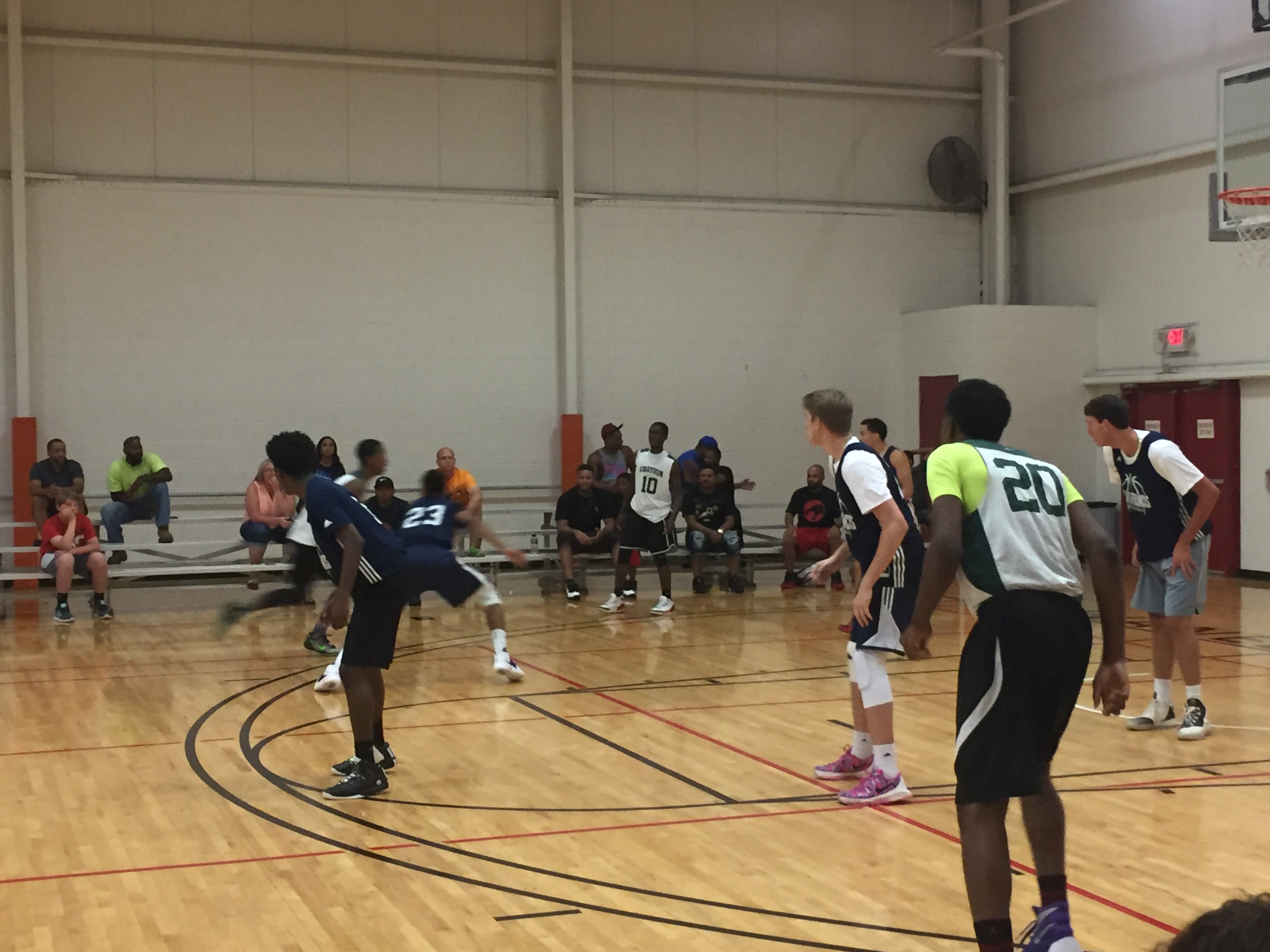 Junior Travis Anderson caught fire in the fourth quarter, scoring eight points and rallying the Rams to a 40-39 lead after trailing 39-32 to enter the final period. The game was tied at 45 with 1:59 left, both teams matching baskets. A silly late foul with 14 seconds remaining put St. Francis senior guard Wallace Tucker at the line. Tucker, who scored a game-high 18 points, sank the two-for-one free throw to give the Knights a two point lead. Anderson had one last chance to either tie or win the game, but the ball slipped out of his hands and a thunderous dunk by Dwon Odom sealed the deal.

Plenty of new faces will be front and center for St. Francis this year. None will be more heavily tracked than freshman guard Dwon Odom. The 6-foot-2 mega-athlete made his presence felt during the travel circuit and enters high school ball as a ballyhooed prospect. Odom stuffed the stat sheet with 10 points, six rebounds, one assist, five steals and three blocks. As elite an athlete as the youngster is, he must craft his shot over the next four years. All 10 of his points came on fast breaks; three of them dunks. Once he gains more confidence in his jumper Odom has a chance to be a very special player.

Now asked to be the leader, veteran Wallace Tucker played the best game I’ve seen him put forth. He did a number on the physically smaller Grayson guards and cleaned up when sent to the foul line, scoring eight points via the charity stripe.

For Grayson, Anderson really turned it on when the game got competitive in the fourth quarter. Incoming freshman Deivon Smith didn’t play a whole lot. The little guard is crafty and has a nice future ahead of him. He hit a game-winner at the buzzer to beat Odom’s Atlanta Celtics earlier in the offseason, giving the two guards a little history. It was a downer not being able to see each other matchup more.

Outside of Anderson, 6-foot-4 senior post Kyle Butts impressed. He is a strong rebounder that gives Coach Geoffrey Pierce a lot of effort inside. He finished with six points and 10 rebounds. Another senior, Aaron Rowe, brings some depth to the wing after moving in from Parkview. He had five points and five rebounds. Terrell Greene scored six points from the perimeter to go with his two steals. The Rams were missing starting center, 6-foot-6 Kenyon Jackson inside who is currently in football season. 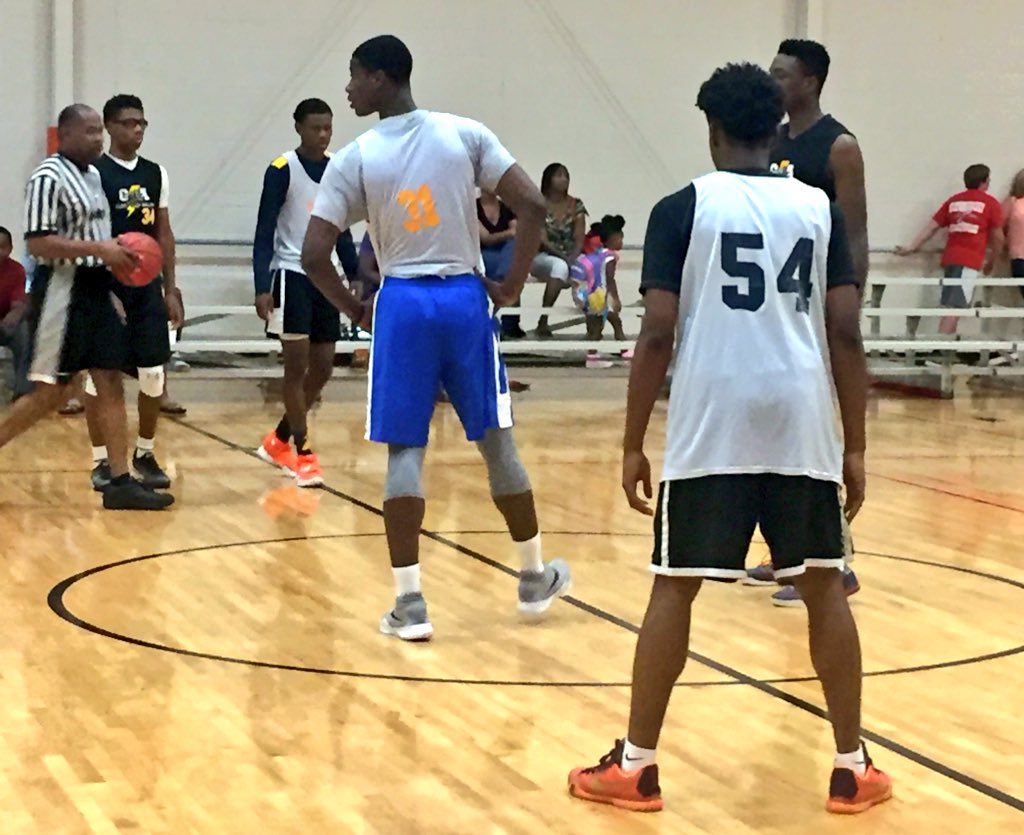 A pair of transfers helped the Eagles over a talented AAU team. 6-foot-8 senior Mohammed Abubakar led the way with 13 points. The big man from Hamilton Heights, TN was aggressive, getting the ball and attacking the rim from the high post. He even knocked down a three. Junior sweet shooter Brandon Thomas moved in from Locust Grove to hit three threes for nine points. Lengthy sophomore CJ Hood pitched in 12 points and was active on defense and the glass rebounding the ball.

Behind guards Justin Quick and John Mills, the Falcons pushed the Cougars to the brink. Quick, a junior, led all scorers with 16 points. Senior Dalton Gerdts buried three threes and finished with 11 points but missed on a game-tying three at the buzzer. Mills, a senior, added 12 points while fellow starting senior guard Brannon Clark was not in attendance. Once again, Grant Howard supplied the offense for Alexander with 11 points. Zeek Copeland and Rod Rapley both went for seven points. 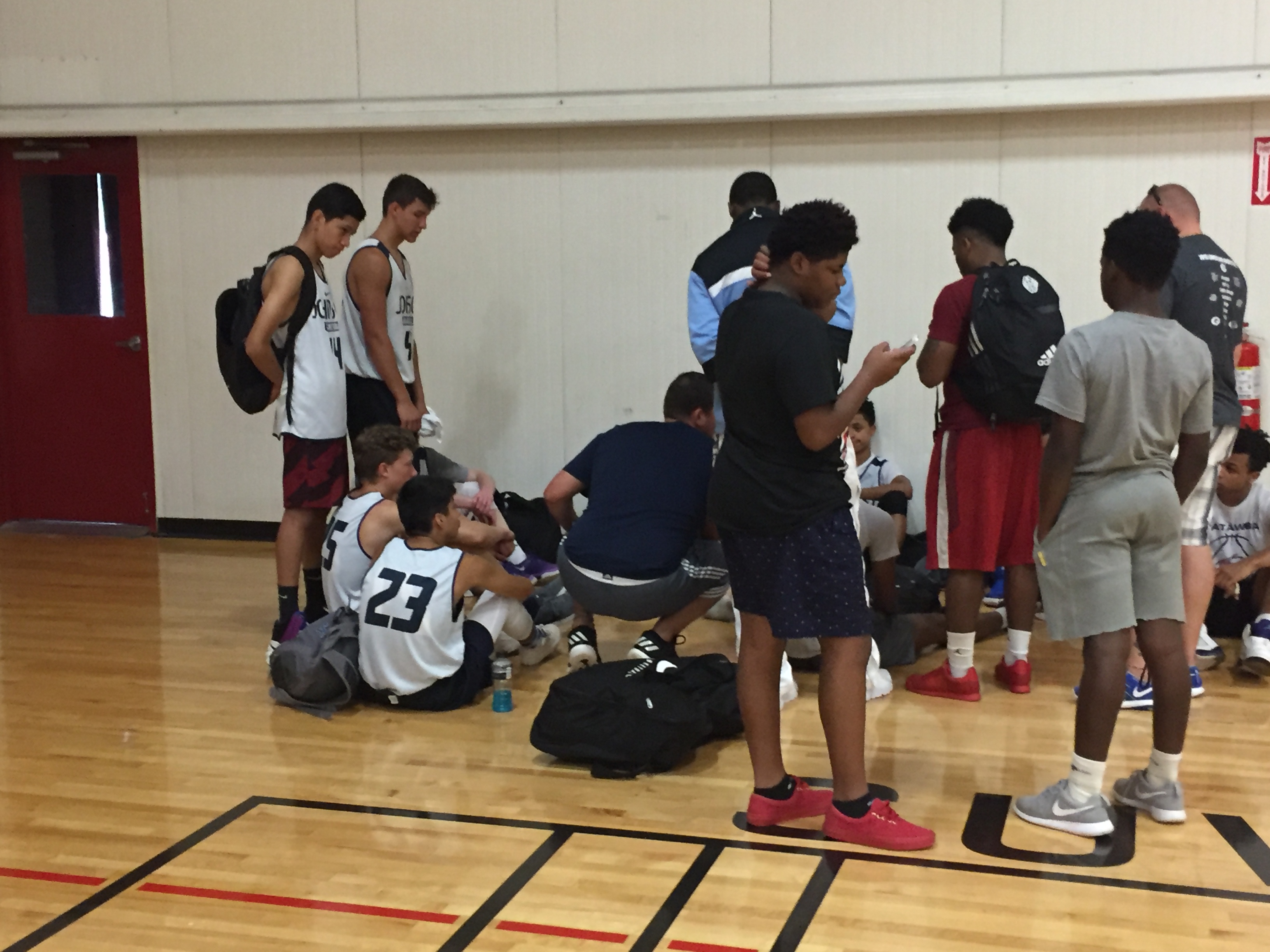 The Knights rallied from down double digits to force overtime where they surged past the Bulldogs. Senior forward Dwayne Wilson posted a double-double with 25 points and 10 rebounds. 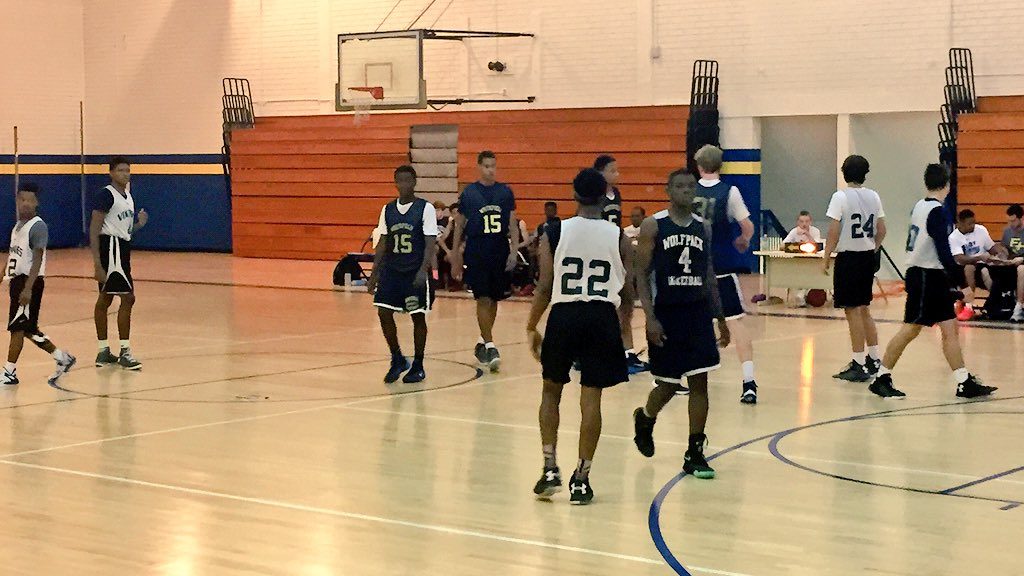 A school-best 24-5 record last season wasn’t enough to save Pete Goggin’s job, meaning Keenan Temple takes over the reins at Johns Creek. Temple has learned under the tutelage of Eddie Martin while at Norcross and most recently Scott Bracco at Lambert with a head coaching stop for three years at Parkview sandwiched in between. Coach Temple inherits a team that loses its top five scorers and looks to be in-line for a down year, but not so fast.

The Gladiators jumped out to a 10-0 run and never looked back. A big reason why Johns Creek cruised to victory?  Rising sophomore guard Neil Ilenrey. The 6-foot-2 guard got his feet wet at the varsity level last year, making a few short appearances. In Year 2, he looks ready to take control of the team. Ilenrey poured in a game-high 16 points to go along with his four rebounds and four assists. He knocked down three deep balls and got in the lane when he needed to.  Ilenrey looked like the real deal and should explode onto teams’ radar this season with the major increase in role and playing time.

Senior Andre Taylor provided 12 points off the bench from an off-guard position. He scored in bunches and provided a nice lift whenever Ilenrey caught a breather on the sidelines. Inside, seniors Alex Ruoff and Topher Sullivan hurt the smaller Knights. Ruoff posted eight points, eight rebounds and two blocks while Sullivan chipped in eight points.

Johnson-Gainesville’s guard play failed them at times, struggling to find open baskets for teammates and allowing Johns Creek’s full-court press to take them out of their rhythm. Dwayne Wilson and Will Richter were the only two players to score more than four points. Wilson, a 6-foot-5 senior, netted 15 points, five rebounds and three blocks. When he touched the ball on offense close to the paint, good things usually happened for the Knights.

Richter, a 6-foot-2 junior guard, will bring shooting to the Johnson backcourt. He hit two three-pointers and finished with 12 points and two assists. On a team that is streaky from beyond the arc, Richter will be heavily relied upon to stretch defenses and allow Kylan Curry and Marcus Jones space to drive and kick while also giving Wilson room to score inside.

5-foot-10 senior Issac Hernandez came off the bench and sparked Johnson-Gainesville with his energy. The cross country standout finished with four points, two assists and two steals. Though he won’t keep scorekeepers busy with his scoring, if Hernandez can bring the same intensity he brought off the bench on Wednesday all season long for Coach Tim Slater, he could play a valuable role this year.

East Hall came into Etowah boasting the youngest roster at the Showcase hands down. Coach Joe Dix loaded his roster with a majority of freshmen with a few sophomores sprinkled in. Imre Earls, a highly touted eighth grader, even saw some playing time. Dix didn’t have much of a choice but to throw his boys into the fire as junior sharp-shooter Luke Cooper broke his ankle during the first day of practice.

Even though they were shorthanded and lacking in experience, the Vikings played hard till the final horn, losing to Milton and Whitefield Academy in competitive games. Luke Holtzclaw was a bright spot in their low-scoring loss to the Wolfpack. The sophomore stroked three threes and finished with a team-leading nine points to go with his three steals.

Senior Mahki Brown collected four points and nine rebounds. The 6-foot-4 post was a double-double threat a year ago and will be asked to anchor the paint and give the Vikings some more offense now that Tylor Brown has graduated and Markese Jackson has decided to forgo his senior season on the hardwood and focus solely on becoming a D-I football receiver.

Whitefield Academy’s Isaiah Hart was East Hall’s main target defensively. The senior guard that averaged 20.1 points per game in 2015-16, was held to six points, five rebounds, three assists and two steals, which helped the Vikings stay within striking distance. Sophomore guard Noah Dryden seems poised for a strong season in the backcourt along with Hart. Missing was 6-foot-7 Tyson Jackson who was not in attendance.