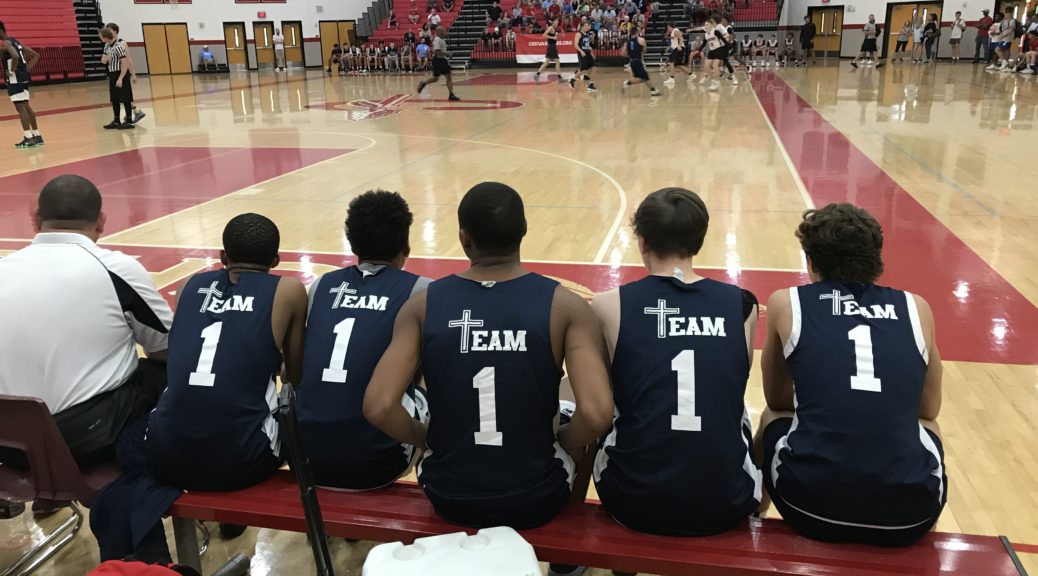 2021 5-9 PG AJ White came out guns a blazin’, drilling three threes in the first half to give the Cougars an early lead that they would never relinquish. White’s shot was on point, finishing with 16 points going 5-of-9 from the field and 3-of-3 from deep. It’s easy to see why White is regarded as one of the smoothest guards in the 2021 class.

2019 6-6 PF Grant Van Beveren posted 12 points (5-10 FG) and 9 rebounds. Outside of his standard productive play in the paint, never trying to do too much, Van Beveren shined as a vocal leader for his young team, encouraging and coaching on the floor and on the bench. With schools like Brown already showing interest, Van Beveren should see his recruitment steadily heat up over the course of his senior season.

First Team All-Region 4-AAAAAAA selection 2019 5-foot-10 PG Miles Herron really struggled for Roswell. He went 0-of-5 from the field and scored all 6 of his points from the line in a two-for-one setting. While his offense was off, Herron brought with him an aggressive on-ball defense. Herron moved his feet very well and used his physical frame to funnel ball handlers. He fought over top of screens and did a good job of not giving up on plays.

Class 7A Freshman of the Year Update

2021 6-4 CG Taihland Owens (Cherokee) put up 14 points in a lopsided loss against Mt. Bethel. Owens looks the part of a blossoming D-I guard. He has the height and physical frame, he can shoot the ball fairly well (hit two threes) and he can get to the basket. As Owens continues to refine his game and mature, don’t be surprised to hear his name as Cherokee County’s next D-I product.

The Eagles, two-time defending GICAA state champs, will have something to say about the GHSA Class A-Private state title next year. With a solid foundation of a three-man core, the Eagles should immediately become a contender in A-Private.

Mt. Bethel is anchored inside by 2020 6-8 PF Jordan Meka, who has the wingspan and bounce to end up being Georgia’s best rim protector in the state. Meka had a slow start in Game 1 against Walton, turning the ball over four times in the first half and failing to score, but in the second half and in Game 2, Meka showed why he is a High Major recruit. In a 52-46 win over Walton, Meka scored all 10 of his points in the second half (5-8 FG). He collected 12 rebounds, 1 assist, 1 steal and 3 blocks. In a Game 2 blowout of Cherokee, Meka impacted the game from the opening tip, finishing with 17 points, 9 rebounds, 1 assist, 1 steal and 3 blocks.

Meka runs the floor with grace and can put the ball on the deck in spurts when attacking the basket. He had great energy on defense and contested every shot in the paint. On offense, he showed a smooth lefty hook on the baseline to score over a smaller defender. Meka has all the tools to become bona fide star in the GHSA.

The second-head of the non-stop front court is 2019 6-5 SF Stanley Eze. Eze oozes potential. He completely dominated in both games thanks to has constant attack of the offensive glass. Eze plays extremely hard and has a motor that doesn’t quit. He gets off the ground quick with his second leap. Against Walton he had 21 points (9-12 FG; 1-1 3PT), 3 rebounds, 1 assist, 2 steals and 2 blocks. In the nightcap, Eze went for 16 points, 9 rebounds, 2 steals and 1 block. The relentless forward is always looking to get to the rim where he can finish with either hand. His athleticism and activity along with Meka can make the Mt. Bethel interior one of the most exciting offensive/defensive tandems in the state.

The point man of the attack is 2019 6-3 PG Coleman Boyd. Boyd and the Eagles like to get out and run, which is where Boyd is most dangerous. With his big frame, Boyd chooses either to take it all the way to the basket or float lobs to Meka or Eze. Offensively, Boyd didn’t have his best night shooting the ball. Against Walton he had 13 points (2-6 FG; 1-5 3PT), 3 rebounds, 2 assists and 2 steals. He scored 7 points and had 2 rebounds, 2 assists, 1 steal and 1 blocks against Cherokee. A few times on the night Boyd attacked the basket hard but ended up forcing the issue and taking a tough shot. When in control, Boyd can distribute the ball well and create open looks for his teammates.

Mt. Bethel’s big three should be able to compete with anybody in Class A-Private. They have some quality role players who will have to hit shots in big games. Their Region 6-A battles with St. Francis could end up becoming one of the state’s best new rivalries.