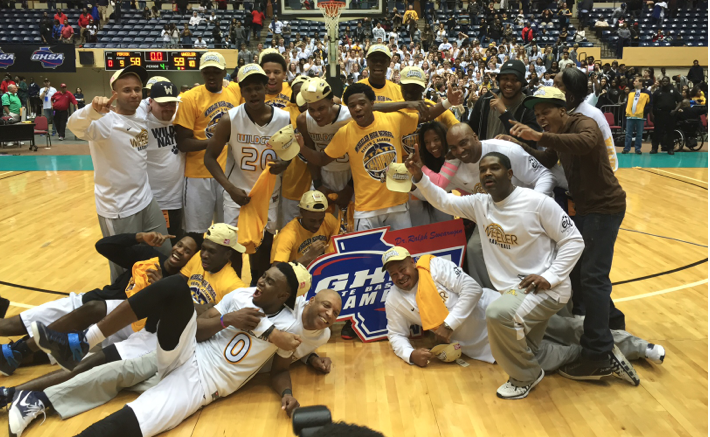 Shiloh gets the nod as my No. 1 team heading into the 2015-16 season. Four transfers join recent Georgia Tech-commit Josh Okogie to form a favorite in the state of Georgia. The three-star forward averaged 21 points and 7 rebounds and now has electrifying guard Darnell Rogers (George Washington), steady ball handler Khalil Richard (Siena), shooter Greg James and big man Thurman Massenburg all joining the party over in Snellville. Don’t forget about senior guard Malik Chandler, who adds depth and is coming off a season in which he was the team’s third leading scorer at 9 points per game. The Generals were 28-4 last season and suffered their only in-state loss to Pebblebrook in the state semifinals, 57-47.

Sliding in at No. 2 is Norcross, who comes off a quarterfinals appearance (80-62 loss to Pebblebrook) and a 27-4 season. The Blue Devils continue to reload and unlike most of the teams in the top 10, the annual powerhouse did not turn to the transfer scene to land its top players. Junior forwards four-star Rayshaun Hammonds and three-star Lance Thomas bring versatility and a matchup nightmare for the rest of the deep Region 7. Sophomore guard Dalvin White is mature beyond his years and senior guard Chris Curlett has been through the rigors of playing in the state’s highest classification and is battle-tested. But it is a newcomer who might be able to return the Blue Devils back to the peak of the mountain top. Freshman guard Kyle Sturdivant can handle the rock, get to the basket and pull up on a dime and can the mid-ranger jumper. Coach Jesse McMillan will have another extremely dangerous team that can beat opponents in a multitude of ways.

If you are looking for a team that will have the biggest turnaround this season, look no further then Westlake. The Lions were 13-15 last season and lost to McEachern in the opening round of the state tournament. Region 3 has transformed into a gauntlet and the best region in the state in terms of top four teams. The Lions are No. 3 with the additions to an already talented roster. The offense will revolve around Langston Hughes transfer Chuma Okeke, a four-star junior forward who averaged 22.8 points and 8.3 rebounds as a sophomore. Ronald Bell, a tough-nosed three/four man also is joining Westlake after starring at North Atlanta.  These two pieces will join a slew of talent: senior guard Raquan Wilkins, junior guard Daniel Lewis, sophomore guard Jamie Lewis and junior 6-foot-9 power forward Michael Durr, who is tabbed as a four-star talent.

It’s never easy to not rank Wheeler No. 1, but the Wildcats will have to prove they can win without Jaylen Brown. They should have no trouble however, with four-star point guard Darius Perry running the show his junior season. Perry took a backseat to Brown (Cal) and Shembari Phillips (Tennessee) last season, but now will be asked to be a focal point of the offense. He will have help thanks to a trio of long and athletic transfers. Senior 6-foot-8, four-star forward Romello White, has landed back in Georgia. White already has committed to Georgia Tech and improved by leaps and bounds while at IMG Academy in Florida last year. Reikan Donaldson is a rangy athlete who joins the Wildcats after playing his freshman season at Calvary Day in Savannah. Lastly, Al-Wajid Aminu, younger brother of NBA player Al-Farouq Aminu, transfers in from Florida as a 6-foot-6 wing that has just committed to North Florida. Returning is Cameron Jordan, another big guard who will be asked to take a bigger role this season. The defending champs finished 30-3 in 2014-15 and have a chance to be even better defensively this upcoming year.

No. 5 Milton has really redone its roster and was one of the most active teams in terms of player movement this offseason. Coming off a 17-12 season with a first round exit at the hands of Alpharetta, Coach Matt Kramer will attempt to compete with Wheeler for the Region 5 title. The Eagles will be anchored inside again by 6-foot-8 four-star Harvard-commit Chris Lewis. The big man will have plenty of talent surrounding him for his senior season. Junior guard Kendrick Summerour has transferred in from Kell and is a slick, And-1 type ball handler with the ability to get to the rack. Sophomore Justin Brown averaged double digits from his guard position at Northview last season and 6-foot-8 power forward Kyrin Galloway comes over from Buford to pair with Lewis inside and provide the Eagles with some elite length in the paint. Alex O’Connell, a junior, could be a potential X-factor for Milton. He averaged 7.7 points last year, but has continued to grow in the offseason and his stock has begun to explode. ACC schools are already in the hunt for the knock down shooter.

No. 6 Pebblebrook was last year’s state runner-up after a controversial foul call gave Wheeler a 59-58 victory. The Falcons were 27-6 and had one of the most talented rosters in the state. Gone are center Derek Ogbeide (UGA) and guard Ty Hudson (Clemson), but Jared Harper (Auburn) is still here and so are huge additions JJ Smith from North Carolina and Collin Sexton from Hillgrove. The three make up possibly the strongest 1-2-3 backcourt punch in the state. Harper averaged over 20 points per game last year, while Sexton was Hillgrove’s leading scorer and top playmaker. The game changer here is JJ Smith, a four-star junior guard that stands 6-foot-4. Smith has freakish athleticism and can do everything on the court. Last season as a sophomore he averaged 19.4 points, 5.9 rebounds and 3.8 assists per game. If Coach George Washington can find some role players to help out this big three, the Falcons could easily soar back into the state championship.

No. 7 Collins Hill tailed off after a hot start last season. The Eagles began 15-2 after a 13-game winning streak, but faltered the rest of the way going 3-6, finishing 18-8 and missing out on the state tournament. Senior guard/forward Kai Lambert returns after scoring 12.2 points per game and grabbing 8.8 rebounds. He will have some talented new faces around him in sophomore power forward Chris Parks (Lanier), senior forward and transfer from Duluth, AJ Cheeseman (New Orleans-commit) and Towers High School transfer, small forward TeShaun Hightower. These three give Coach Ty Baumgardner some much needed strength and length. Cheeseman averaged 11.4 points and 7.1 rebounds at crosstown rival Duluth, while Parks chipped in 8 points and 5.2 rebounds and Hightower poured in 12 points a night at their respective schools. Collins Hill also has some quietly steady guard play that comes from juniors JD Ozoh and Max Clark.

A young team that might be beginning its climb back to the pinnacle of the basketball scene is No. 8 Berkmar. The Patriots finished 13-15 in 2015 and played well against Norcross in round one of the state tournament before bowing out, 62-49.Three juniors make up a talented backcourt that could sneak up on teams if they haven’t done their due diligence. Al Durham returns after averaging 14.2 points and 5.6 rebounds. Zach Cooks slides over to man the point guard position after seeing plenty of time at Norcross and Jay Estime is a knockdown shooter that joins the Patriots after averaging 10.7 points at Peachtree Ridge. Durham and Estime both have designs on becoming division one players. Another transfer, Robert Hill, a Duluth transfer, is a big body at 6-foot-8 but he must become eligible first to make an impact. Berkmar’s strength will lie in its guard play and depth. Leroy Jones IV and Lane Foster both will see big minutes in the backcourt and will be asked to guard top perimeter players.

No. 9 Newton might have been a sleeper to some teams last year, but not anymore. The No. 4 seed finished 22-9 and knocked off defending champion Tift County in round one of the state playoffs 52-49, before stunning Dacula 58-54 in round two and falling to Wheeler in the quarterfinals 72-54. Coach Rick Rasmussen is one of the best in the business and picked up career win No. 200 late last season. Guard play is the name of the game with this bunch. Junior guard JD Notae can score in a variety of ways while the same can be said about senior Jaquan Simms. The one player to keep an eye on is freshman guard Ashton Hagans, who has been nothing short of impressive. He will be counted on to contribute right away and give the Rams one of the scariest three-headed backcourt monsters you might not have heard of. Newton had a great offseason and ran its summer record up to 25-1 at one point.

Depth, length and heady guard play is the story for No. 10 Lambert. The Longhorns were banged up at the end of last season and were dumped by Hillgrove in the Sweet Sixteen, 73-59, but still managed a school-record 24-6 season. Senior guard Tanner Hall returns after being named Forsyth County News’ Boys Basketball Player of the Year. He averaged 15 points, 4 assists and 4 rebounds and has garnered attention from low-major division one programs. Hall can stroke it, get to the basket and find the open man. Senior 6-foot-7 forwards Ross Morkem and Connor Mannion are usually the beneficiaries of Hall’s passing and much like Hall, both have a chance to play at a high level in college. Junior Andrew Melms came on strong last year from his guard position and gives Coach Scott Bracco a very nice duo running the offense.