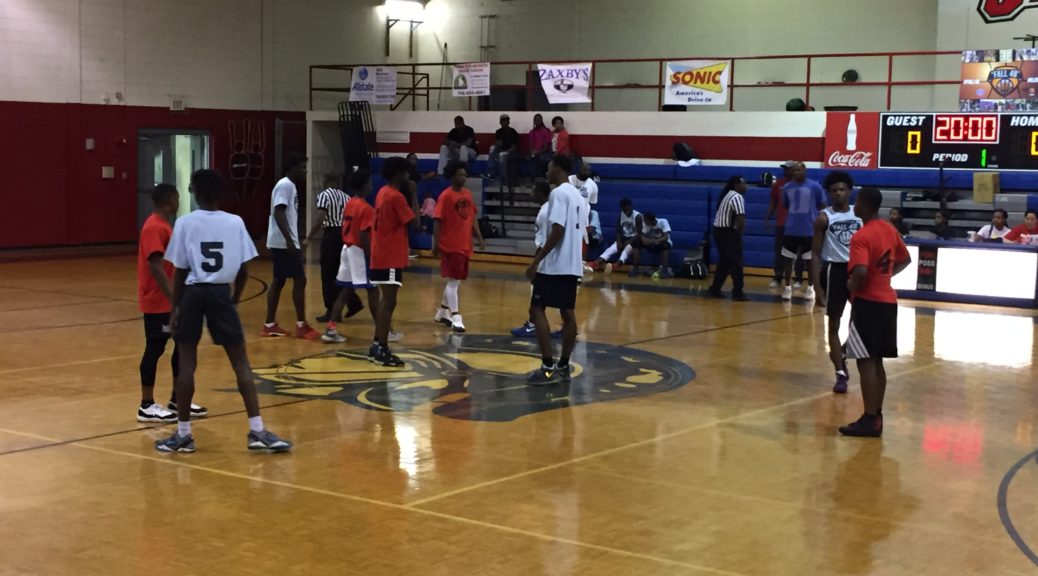 William Avery’s Fall 48 Invite featured some of the CSRA’s top players with a few of the surrounding areas’ standouts sprinkled in. While there was no cell service in the gym to recap the action live on Twitter, I was still able to take some quick notes. Many players will be broken down into further detail on this week’s Spielin’ & Dealin’ Podcast.

The Augusta Chronicle’s reigning Player of the Year, Aquinas’ Tre Gomillion, looked like he didn’t miss a step. Just a week removed from receiving clearance to return to action after meniscus surgery, the 6-foot-3 shooting guard had coaches in attendance turning their heads with his new trimmed down look, improved outside shot and his trademark explosion to the basket. The 2016 Class A-Private All-State Second Teamer registered 20 points, five rebounds, three assists, one steal and one block in his usual stat sheet stuffing fashion. Gomillion attacked the basket and finished around the rim with power. More importantly, he went 2-of-4 with his jump shot, hitting a three to open up play. His communication on defense and ability to clog gaps as a help defender was also a big improvement from last year.

Timmy Sellers, Tim Williamson and Tre Whitehead played on separate teams, but will join forces at Glenn Hills on what should be one of the area’s best teams and a threat to make a deep run in Class AA.

Sellers, 6-foot-8 with a South Carolina State offer, didn’t get many post touches but showed nimble footwork when working the baseline with a propensity to finish on the other side and use the rim to shield defenders. He finished with six points, eight rebounds and one block. His final hoop of the game came on a coast-to-coast drive after snagging a rebound off the glass. That kind of versatility should make him a popular name among Low Majors his senior season.

Williamson, who transfers in from Hephzibah for his senior season, is a 6-foot-4 guard that can help out on both ends. He put up 17 points, eight rebounds, two assists and one block in a balanced game. Williamson is best at getting to the lane, but he also knocked down a few outside shots including a three. His length makes him an intriguing defender on the perimeter.

Whitehead, a 6-foot-5 sophomore, has one of the highest ceilings in Augusta. The athletic slasher has a nice feel for the game which helped him post 10 points, eight rebounds, one assist and one steal in a track meet. If Whitehead can develop a three-point shot, he has a chance to pick up some Division-I interest before all is said and done.

A slew of Braves joined the fun from Milledgeville and did not disappoint. 2019 shooting guard Donte Justice was in attack mode from the opening tip, showing that he is wired to score. The football standout is quick off the bounce and hunts his shots. He drilled four three-pointers en route to a loud 23 points, four rebounds and three assists.

2018 guard Brenden Robertson scored 10 of his 13 points in the second half. Known for his effort and motor, Robertson wore down his opponents adding eight rebounds, three assists and two steals. He is someone that smaller college programs should check into.

Junior point guard Torez Hicks had 11 points, two assists and three steals in his outing. Hicks wasn’t as flashy scoring the ball as his teammates were, but Hicks brought energy and clearly took pride in his defense. It isn’t often that you see a point guard set up to attempt to take three charges in a showcase camp. Little things like that are what win ball games and hopefully get you noticed by college coaches – I know I took notice.

Donald Henley Jr. (2018) of Laney and Richard Crawford III (2019) of Greenbrier looked good. Henley is small in stature (5’9”) but the tough point man has jets. He can race down the floor and create offense for himself and others. He tallied nine points, four rebounds, three assists and one steal in a win. Crawford was smooth in his game and did a little bit of everything, totaling 11 points, four rebounds, four assists and two steals. Crawford has a sweet jumper and knows when to pick his spots. He gives me reason to believe that Greenbrier should be much improved this season. 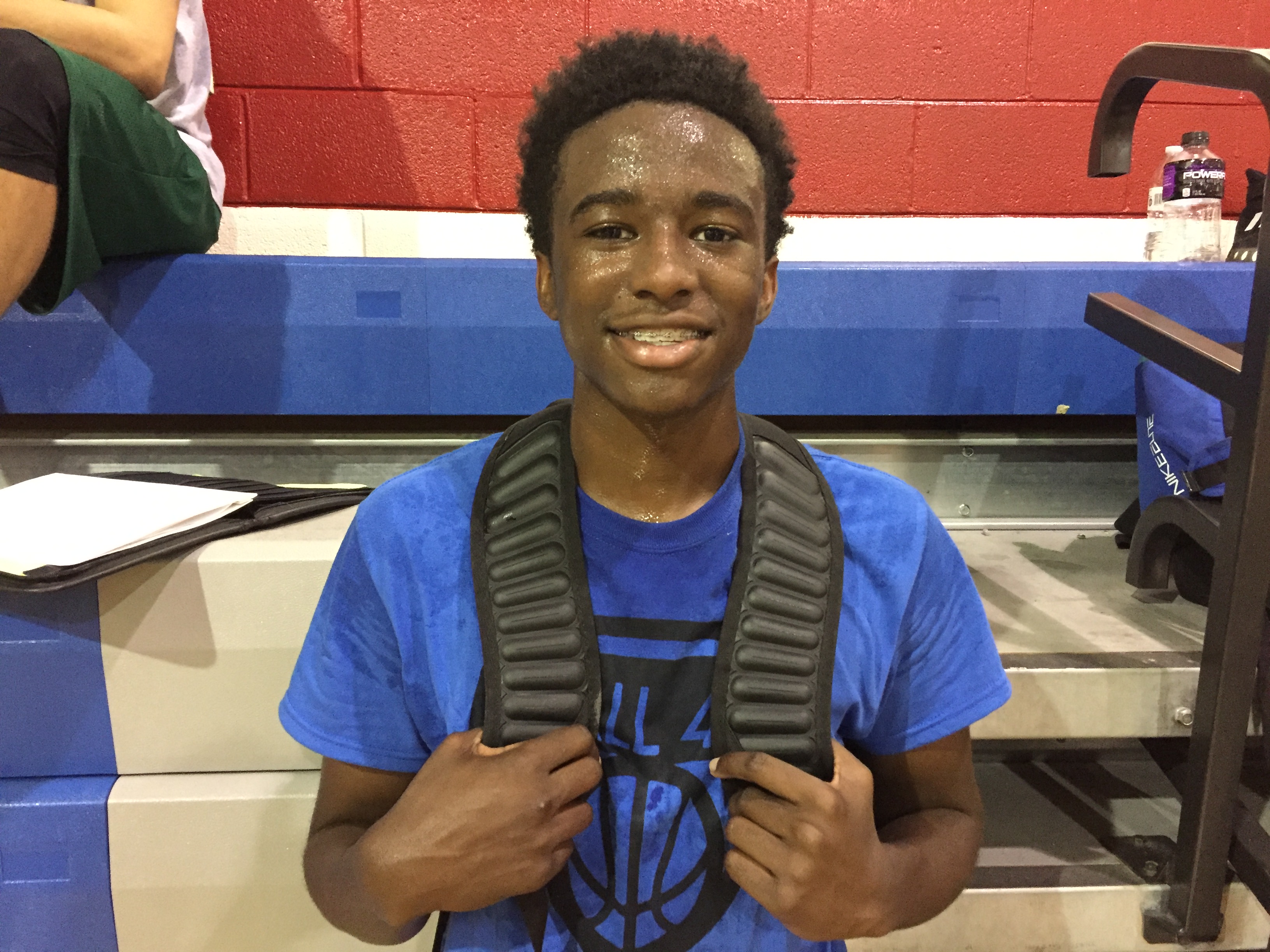 Many of the aforementioned players from the Fall 48 Invite have been regulars on Sandy’s Spiel, but one player who hasn’t seen the publicity yet and now has earned it, is Grovetown senior point guard Eric Graham II. The 6-foot-1 guard was one of today’s best performers. He scored the first 11 points of the game for his team and finished with 18 points, three rebounds, five assists and one block. The 6-foot-1 guard isn’t overly intimidating with a nice smile full of metal but the senior showed he has some bite to him.

Graham played with patience and composure and was crafty and reliable with the ball in his hands. He knocked down contested jumpers, including three from distance. Graham isn’t a player that will ‘wow’ you, but he was on the top of his game in front of Augusta State and a handful of other schools. It was a good first step to get himself on the radar to play at the next level and if he can be a leader on a team that won just 5 games a year ago and help the Warriors to the postseason, his career should be deemed a successful one.