***Click on one of the two links above to listen to the podcast. The file was too big to post on wordpress — that means it was a JAM PACKED episode!*** 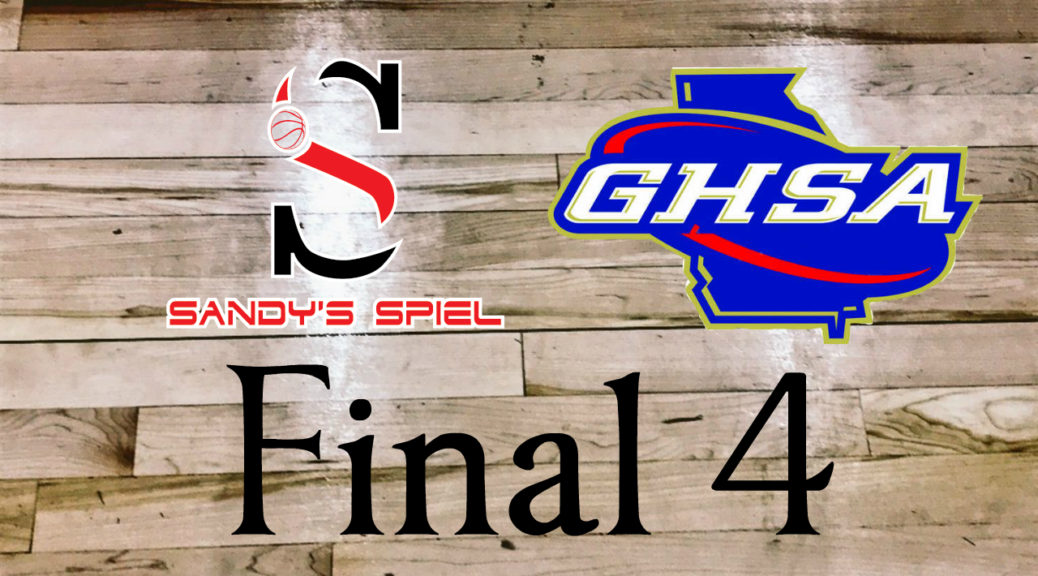 R4 #1 Lovejoy 70, R7 #1 Northview 42: Northview shot 22.2% in the first half as the Wildcats controlled the tempo from the opening tip and ran the Lady Titans out of the gym. Genesis Bryant scored 14 of her game-high 18 points in the first half to set the tone. Kayla Brown double-doubled with 16 points, 12 rebounds and 2 blocks. Anaya Boyd collected 11 points, 5 rebounds, 7 assists, 5 steals and 2 blocks while J’Auana Robinson netted 10 points. Northview was led by Ashlee Austin’s 17 points, 6 rebounds and 3 steals. Eden Sample had 11 points.

R2 #1 Spalding 58, R1 #1 Carver-Columbus 51: With Corriana Evans sidelined with foul trouble most of the game, Coach Tykira Gilbert’s guards lifted the Jaguars to an upset of the No. 1 ranked team in the state. Aniaya Jester collected 15 points, 4 rebounds, 2 assists, 2 steals and 2 blocks battling against Carver-Columbus’ size. Kiana Banks added 13 points, 9 rebounds, 2 assists, 3 steals and 3 blocks. Evans scored 6 of her 8 points in the fourth quarter in a three-minute span.  The Tigers received 13 points from Mariah Igus and 9 from Alycia Reese. Janya Love-Hill finished with 11 points, 7 rebounds and 5 assists while post Olivia Cochran totaled 8 points, 17 rebounds and 3 blocks.

R5 #1 Langston Hughes 69, R4 #2 Jonesboro 49: Virgina Tech-commit Landers Nolley poured in 27 points and 6 rebounds to lead the Panthers to a state title defense next week. Tyler Smith had a loud 11 points — all in the fourth — with a handful of powerful dunks. Tyrel Morgan added 10 points and 7 rebounds.  Jonesboro was powered by Jamari Smith’s 20 points, 16 rebounds and 3 blocks. Miles Black netted 11.

(FRIDAY At Fort Valley State)
R8 #1 St. Pius X 66, R3 #1 Baldwin 61: The Golden Lions held off the Braves in a classic. Up 58-57 after a Brenden Robertson free throw, Baldwin saw the game slip away in the blink of an eye. Everett Lane came down and buried one of his seven threes to regain a St. Pius lead and on the ensuing inbound, Niko Broadway came away with a steal and dished to Troy Stephens who missed the first layup but got his own rebound and finished with a foul. Stephens missed the free throw but the Golden Lions went up 62-58 and restored order. Lane finished with 25 points and 3 blocks while Stephens posted 11 points and 4 rebounds. Patrick Snipes scored 8 points, Broadway 7 and Zach Ranson 6 while Matt Gonzalo handed out 8 assists. The Braves were powered by Robertson’s 16 points and 5 rebounds off the bench. Baldwin trailed 13-1 before Robertson and 6-foot-6 Justin Webb made an impact off the pine. Webb scored all 7 of his points in the second quarter. Donte Justice finished with 12 points and 5 assists. Region 3 Player of the Year Rodney Walker added 11 points and 8 rebounds.

R2 #1 Upson-Lee 52, R5 #1 Sandy Creek 51: 62-Straight.  No.1 Upson-Lee clawed their way to the long awaited rematch with No. 2 St. Pius in the state title game at McCamish Pavilion. Upson-Lee trailed 37-30 at the half to an upset-minded No. 3 Sandy Creek team that received 11 second quarter points from 6-foot-4 point guard Jarred Godfrey to pave the way. Godfrey scored 16 of his team-high 22 points in the first half, scoring over the smaller Knight guards. Unsung hero Jacorey Smith led Upson-Lee at the break with 10 points, finishing with 14 on the night.
Sandy Creek nursed a slim lead almost the entire third quarter, withstanding a nine-point frame from MTSU-signee Tye Fagan. Zyrice Scott came away with a steal and a layup just before the horn to give the Knights their first lead of the second half at 43-42.
Upson-Lee pushed their lead to 49-44 at the 5:26 mark, but a minute later Cameron Traylor picked up an intentional foul, sending Godfrey to the line where he sank both attempts. Still with the ball, Godfrey made it a 4-point possession when he nailed a jumper, cutting the lead to 49-48. Julian Alexander sank a three at the top of the key to knot the game up at 51 with 2:34 to play. Sandy Creek had a chance to go ahead, but Fagan elevated to swat a layup attempt out of bounds.
With 30.3 seconds remaining, Fagan split a pair of free throws to give the Knights a 52-51 advantage. Following a defensive stand, Traylor was sent to the line with 8 seconds left. Traylor missed the front end, giving the Patriots one last opportunity to race the ball down. TJ Bickerstaff ran into Travon Walker and didn’t get the whistle as his fading shot fell off the mark. Fagan finished with 23 points, 6 rebounds and 3 blocks while Walker tallied 11 points, 13 rebounds an 4 blocks. In the loss, Bickerstaff posted 11 points.

(FRIDAY At Columbus State)
#4 St. Francis 83, #8 Holy Innocents’ 54: The Knights built up a 40-18 halftime lead and never looked back. Dwon Odom had 20 points followed by Sam Hines’ 16 and Chase Ellis’ 11 while Caleb Snyder tossed in 10. Matt Meadows ended his career with 26 points for the Golden Bears. Josh Smith netted 17.

#6 Aquinas 47, #2 ELCA 41: Daniel Parrish scored 12 points and Tre Gomillion added 11 as the Irish clamped down on ELCA for the second time this season. Jamaine Mann had 13 in the loss. Mekhi Cameron scored 10.

#3 Wilkinson County 61, #2 Central-Talbotton 60: Raequan Smith shocked the Hawks with a last second layup to send the Warriors to another title game.