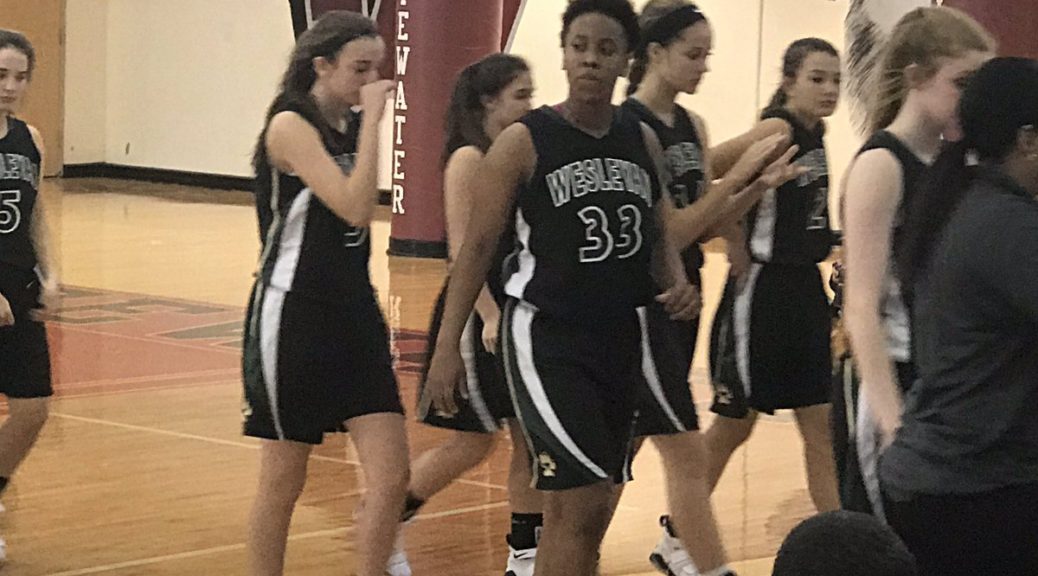 FAYETTEVILLE, Ga – In girls high school basketball, the holiday tournaments give teams the opportunity to play against competition from other classifications and parts of the state, it is a good gauge of where they are and what they need to work on before region games heat up in January.  The Fayette County Lady Tigers, who advanced to the Sweet 16 last year in Class AAAAA, have gotten off to a strong start and got the chance to face one of the most storied ladies’ programs in the state, the No. 2 Wesleyan Lady Wolves. Under the leadership of Head Coach Jan Azar, Wesleyan has won 12 state championships in the past 16 years.  The current edition is led by the talented senior duo of point guard Amaya Register who is signed to Old Dominion and Furman-signee Sutton West, but an otherwise young supporting cast. While the Lady Tigers (8-2) played Wesleyan even through the first quarter, emerging star sophomore AC Carter dominated on the offensive and defensive sides of the court and led the Lady Wolves (6-1) to an impressive 83-58 win.

The opening tip of the game gave a glimpse what was to transpire as West easily tipped the ball out to Carter who had an easy lay-up for the opening score. West would score on their next possession to go up 4-0 less than one minute in and a sudden feeling of a blow-out wafted overhead, but Lady Tiger senior forward Rikkelle Miller knocked down a three to answer, which seemed to settle her team down. Miller hit another three-pointer at the end of the first quarter to tie things up at 20. An otherwise impressive first quarter by the Lady Tigers did have one negative, the sharpshooting Miller picked up two quick fouls, the second one only three minutes into the game, it would significantly affect the way Fayette County Head Coach John Strickland rotated her in and out to protect her.

The Wolves struck quickly to start the second half, they went on a 9-0 run over the first 3 minutes. Register and Carter scored during the run that put the Lady Wolves up for good. The Lady Wolves may have stars, but their roster is strong from top to bottom and minutes are spread out.  When West sat down in the second quarter, Sophomore Izzy Larsen got productive time and scored off an offensive rebound and put back. Another sophomore, Lauren Hill, hit a three from the top of the key and Register followed suit. Fayette County senior guard Trinity Brown, who had the task of answering the Wesleyan press all game, kept the Lady Tigers within striking distance, she slashed to the basket on two occasions for lay-ups to keep her team close. At the half, the Lady Wolves were up 40-31.  After the 9-0 run to start the quarter, the Lady Tigers matched points the rest of the half.

The third started like the first, Carter hit a triple on the first play. It was the start of a surgically precise third quarter where the Lady Wolves operated at will. They hit six three-pointers in the quarter alone, Carter and Register with two each, and Nicole Azar and Hill also getting one. Maegan Barkley was a bright spot in the second half for the Lady Tigers, she made an athletic steal at mid-court and a drive for the basket plus the foul to keep Fayette County within reach at 58-45.

By the fourth quarter, the game was decided. It was an opportunity to showcase some skillsets and get some younger players some playing time. Carter impressed the crowd with a strong defensive rebound and then drove the length of the floor for the lay-up. She was almost unguardable throughout the game.  Miller would add one more three with 6 minutes remaining, but the Lady Wolves closed out strong for the 25-point win.

The players of the game from Game 1 – Queens of the Hardwood Tournament.

Coach Azar was proud of the effort afterwards, “We have not played in 11 days, so I was really impressed at our shooting, we shot the ball really well. And made shots on the offensive end allow us to set up the press. Fayette County is a good team, we just hit the shots that let us jump out to a big lead and put it away.”

The Lady Wolves are going to be sending a lot of good teams home with 25-point losses as the season progresses.

One thought on “Explosive fourth quarter powers No. 2 Wesleyan past Fayette County at Queens of the Hardwood Classic”