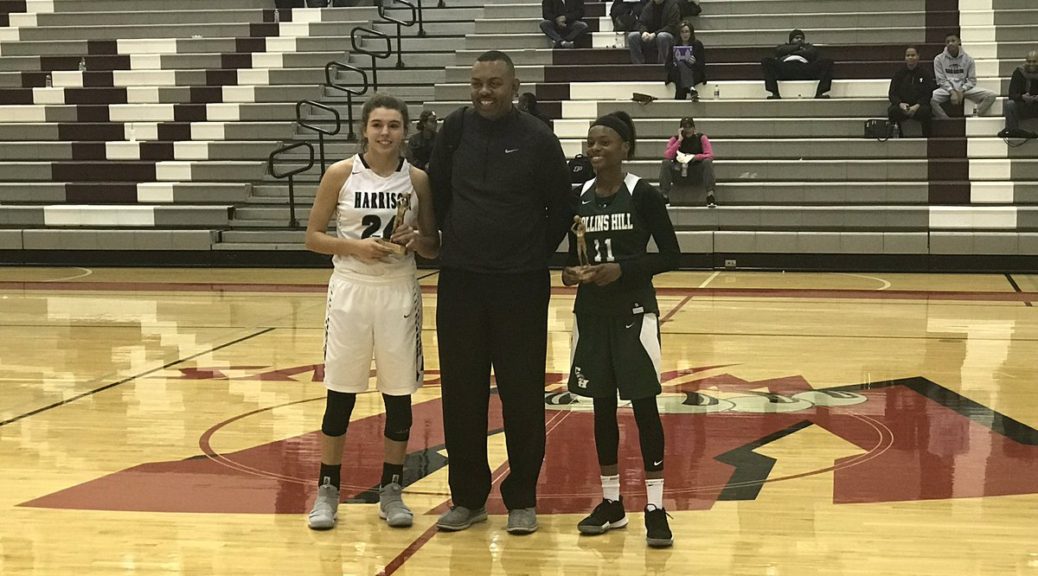 FAYETTEVILLE, Ga. – In men’s basketball, most games are won with athleticism and skill, the tallest players and those that leap the highest usually determine the outcome.  But the ladies game has more room for diversity of style, it can be more of a tactical match of wits and the ability for the head coach to relate and motivate his team.  In the nightcap of the Queens of the Hardwood Classic, two of the best teams in the state faced off with completely different roster styles. The Harrison Lady Hoyas (7-2), who lost the state championship last season to Mays by one point, are currently ranked No. 2 in Class AAAAAA while Collins Hill (9-1) is ranked No. 2 in Class AAAAAAA. Harrison has a small quick line-up, they start four guards and a forward, while Collins Hill is exactly the opposite, they start four forwards and one guard. The game was a low scoring affair as the Lady Hoyas dictated the pace, but the Lady Eagles held on for the 42-39 win.

Collins Hill has All-State forward 6-foot-2 Jada Rice (NC State) and University of Georgia-commit 6-foot-3 Jayvn Nicholson and as Head Coach Brian Harmon said, “We prefer to work our offense inside and which opens up our outside shots.”

That is how the game started, Nicholson scored the first basket in the paint for Collins Hill to set the tone early. The Lady Hoyas prefer to run a motion offense with multiple passes and controlling the ball for long periods of time. Their typical possession contained up to 15 passes as they looked for the open shot, with the entire team working in orchestrated precision that resembles synchronized swimming in some instances. You could sense that the Lady Eagles’ height inside was affecting Harrison, as most of their shots had a much higher arch than normal and at the halfway mark of the first quarter, the Lady Hoyas still had not scored a point. Senior Harper Vick finally broke the ice with a three at 3:34 mark in opening quarter to tie the game at 3.

The change of pace from Harrison caused frustration for Collins Hill, with the Lady Hoyas controlling offensive possessions for long periods of time, they effectively took away what the Lady Eagles do best. The patience was paying off for Harrison as they jumped out to a 10-8 lead after the initial quarter.

Harper Vick with an early 3 to give @Ladyhoyabball a 10-8 lead over @C_Hill_Bball end of 1st quarter pic.twitter.com/lxrrQ6twhf

With their post players effectively neutralized, Collins Hill showed that to be a champion you must adapt, and junior guard Bria Harmon (Purdue) took control of the Lady Eagle offense, hitting a runner early in the second quarter to tie the game up. Harmon, who is a Gwinnett Daily Post Super 6 pick (along with Nicholson) and Coach Harmon’s daughter, continued to look for scoring opportunities throughout the game.

Coach Harmon called upon junior Katherine Fourie off the bench to supplement the scoring and she came up big. She entered the game with the Lady Hoyas up 16-14 and scored six points in less than two minutes, including a three to push Collins Hill to a 22-16 halftime lead.

Coach Harmon said, “Katherine can provide instant offense for us, which we needed, I just had to figure the right moments to get her in there.”

When he put her in, she came through, as she led all scorers with 15 points, all of them clutch.

Harrison continued the game plan in the third but behind Harmon, the Lady Eagles were slowly growing the lead behind Harmon and with the clock clicking down in the third quarter, Lady Hoya senior guard Sarah Woghiren hit a three at the buzzer to turn a 9-point deficit into a more manageable 31-25 game entering the fourth.

After a Jaron Stallworth basket, the Lady Eagles were up 37-30 with 4 minutes remaining, but Harrison head coach Steve Lenahan, in his 10th season, saw his plan coming into focus as the Lady Hoyas scored six unanswered to pull within one point with two minutes left.

Harrison had two possessions to take the lead but could not convert on either one and then “instant offense” Fourie hit a three-pointer with 1:13 remaining that seemed to ice the game at 40-36.

The Lady Hoyas didn’t bring the word quit with them on the bus from Kennesaw and when Vick converted a free throw to complete a three-point play to bring the game to 40-39 with 37 seconds, they were just a turnover away from another chance to snatch a win. However, Collins Hill broke the press and Nicholson hit two free throws to ice the game for the 42-39 win.

Coach Harmon was frustrated but pleased with the outcome. He closed with, “We have to do a better job of forcing our tempo instead of just allowing ourselves to play our opponents game, that is the lesson that we learned tonight.”

He had a classroom-style chat with the team on the bench for about ten minutes before they headed home.  Hopefully, it is a lesson his team learned, as the head coach of their next opponent was in the building to observe and scout.

Great teams separate themselves from the good teams by the way they adjust, Collins Hill has the roster, it us up to them to learn from tonight and move forward.